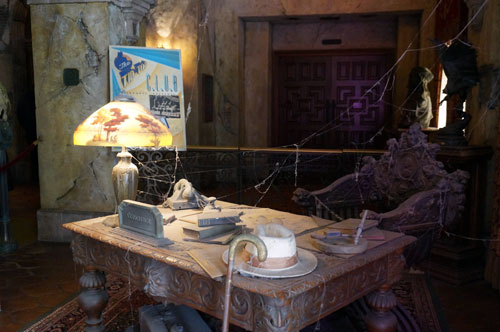 There are several different kinds of queues in Walt Disney World. From the basic switch-back line to the elaborately themed and interactive, the queues for Disney’s attractions make the waits, well, maybe not purely enjoyable, but at least not so bad.

Seven Dwarfs Mine Train opened in May 2014 as part of Magic Kingdom‘s New Fantasyland expansion. It is one of my favorite interactive queues in all of Disney World.

Right before you enter the mine portion of the queue, you can make some music with a water element.

Upon entering the mine, spin the barrels and watch for the projections on the ceiling, but don’t spend too much time here. Allow yourself a chance to look around for the amazing detailing of the mine itself. The texture of the rock, the crevices, and the decorations tell the story of the Seven Dwarfs Mine Train. Can you spot the hidden Mickey behind the Cast Member who asks, “How Many”?

Dumbo has existed for a long time, but its current state is better than anything that existed before. Fantasyland, the area that housed Dumbo and other rides, definitely needed a makeover. Before New Fantasyland, the area looked more like a glorified midway with attractions spotted throughout and very little theming to tie them together.

That’s not true anymore! Dumbo went from one of the worst queues to one of the best queues. Parents especially like this queue because you don’t actually wait in line. It’s also indoors and air-conditioned! You check in and receive a “ticket” (really a pager). When your place in line is coming up, your ticket will alert you. If you’re enjoying the air-conditioning and your kids are playing happily, there’s no harm in ignoring the page; you’ll continue to get paged until you’re ready to ride.

Test Track in Epcot‘s Tomorrowland has one of the most unique queues. The reason I like Test Track’s queue so much is because everyone can participate.

There is one section that allows you to design your own concept car and link it to your MagicBand or park ticket. You and your traveling companions will work together to create a concept car. Once your car is completed, you’ll proceed through the queue line to the attraction where you will “test” your car in various road tests. Look at the screens in the ride after each road test to see how your car performed.

After the attraction, there’s another area to play with your concept car. Think of this as a “post-queue.” Here you’ll find video game-style games where you can put your concept car up against other guests’ cars.

I think the reason I like this queue so much is because it carries the whole way through the attraction and even afterwards.

Haunted Mansion is a classic Disney attraction, but the old queue has been replaced with a new theme. While the new queue is less scary for kids, some people complain that it contradicts the actual theme of the attraction. However, I don’t think this is true.

The Haunted Mansion in Magic Kingdom’s Liberty Square is home to 999 happy haunts, “but there’s always room for one more!” Sure, the implication here is a bit disturbing, but overall the attraction is meant to be a bit kitschy.

The best part about this queue is that it really fulfills the purpose of a queue, which is to foreshadow what’s to come in the attraction. More than that, though, the queue is an attraction in itself if you know where to look. Can you solve the Haunted Mansion queue puzzle?

6. Under the Sea – Journey of the Little Mermaid

Journey of the Little Mermaid in Fantasyland is one of the best queues because it truly reflects the story of The Little Mermaid movie. What’s more, the queue leads very nicely into the attraction.

A shipwreck welcomes guests with Ariel at the front. As you continue to advance in the queue, you’ll be surrounded by waterfalls, tide pools, starfish, and wrecked ships. Remember how much Ariel loved to collect trinkets from shipwrecks? You’ll see all of her wares as you head into her grotto. One of my favorite parts about this queue, though, is the interactive crabs.

What makes this queue so great is that the story doesn’t feel forced. It is slowly but surely immersing you into the story and you are literally taking a journey under the sea.

5. Pirates of the Caribbean

Pirates Of The Caribbean in Magic Kingdom’s Adventureland has been rethemed in recent history to reflect the story told in the movies by the same name. This is the first and only attraction that actually inspired a movie, and then the movies inspired an attraction makeover (sorry Haunted Mansion and Country Bear Jamboree).

As you enter Castillo del Morro, you instantly feel like you’re in a fortress and you are slowly removed from the outside world as you walk by cannons, ammunition, a jail, and eventually to the pirate ship. Oddly enough, the boarding area, which is a moonlit bay, actually feels like it’s outside. While the queue ends here, the story continues in the attraction, but the ride wouldn’t be nearly as good without the queue. Plus, you probably wouldn’t understand it very well.

Disney’s Animal Kingdom is a totally unique theme park with unique attractions and shows.  Kali River Rapids in the Asia section is one of those unique attractions. You can’t see the ride itself, and it’s actually a bit difficult to find. I sometimes forget it’s there! This probably helps with the story of the attraction.

The queue helps elevate this attraction to Disney level. As you wind through the queue line, you walk past temples, little shops, statues, and ruins, and you really feel like you’re entering a village in Asia. As you continue on the path, you’ll see laundry hanging on a line, bicycles propped up like they were just ridden, and instruments that have recently been played.

Before you exit the queue, the “Kali Rapids Expeditions” company welcomes you to a rafting expedition with the expressed goal of showing explorers the natural beauty of the forest and how it’s being compromised by loggers who have illegally entered the area. In fact, you can hear chainsaws running in the background.

All of this builds the tension as you board the raft suggesting that you may encounter some loggers along the way. That may happen, and you will definitely get wet, too.

Star Tours in Disney’s Hollywood Studios is another attraction with an amazing queue.  Whether you like Star Wars or not, you’ll probably like this queue and the ride.

The “pre-flight” experience is one of the best parts. Riders walk through the queue where you’ll see all of your favorite Star Wars characters including C-3PO, R2-D2, and a massive StarSpeeder 3000 ship.

Like Pirates of the Caribbean, there are so many nods to the highly successful movies and I can only assume that this will get better not only in the attraction but also surrounding it. As Star Wars Land continues to develop and grow into the finished product, the area leading up to this attraction will act as a queue before the queues.

Expedition Everest in Animal Kingdom’s Asia section is one of my favorite attractions.  The ride and the queue are amazing!

There’s lots of storytelling going on as you enter a village with small businesses. I always feel like I’m transported to Nepal preparing to climb Everest.

The second part of the queue includes a general store, a family home, a monastery, and a yeti museum. You really understand that significance of the yeti in Nepal culture. You will probably feel a reverence leading to hesitation but also excitement for the attraction. My favorite part in this queue is the museum, which includes artifacts of the yeti. While some pieces are created by Disney Imagineers to fill in the blanks, many of them are real findings from Nepal. These artifacts just might make you question your position on the reality of the yeti. That’s Disney’s way of adding culture and learning into fun, and they do it very well.

Twilight Zone Tower of Terror at the end of Hollywood Studio’s Sunset Blvd rises to the number one spot on my list because the queue performs its purpose the best of all. In fact, the experience begins even before you enter the queue; as you round the corner onto Sunset Blvd, the Tower stands ominously in the distance beckoning you to approach.

As you finally enter the queue, you’ll hear eerie music leading you down a winding a path, through gardens that lead up to the hotel. You’ll see empty water features with cracked floors then as you enter the hotel’s grand lobby, the feeling that the hotel was deserted long ago sinks in with an empty reception desk and dust and cobwebs all over. As a side note, Disney actually instructs their cleaning crew to purposefully leave this attraction dusty!

The lobby instantly puts you into an episode of the Twilight Zone. While just about everyone will enjoy the queue and the attraction, there are certainly some references that only Twilight Zone fans will understand. Nevertheless, the queue does an excellent job of hinting to hotel guests what’s to come and it leads to an attraction that is truly reflective of the queue and the television show. The theming here is, well, out of this world!

Which is your favorite Disney World queue?