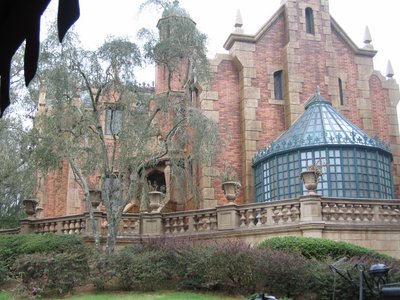 Despite early ideas by Imagineers for a “typical, run down haunted house,” Walt himself didn’t like the idea of a dumpy house in the middle of his perfectly manicured theme park.  In response to the idea of a worn down haunted mansion, Walt is widely quoted as saying “We’ll take care of the outside and let the ghosts take care of the inside.”  In other words, he had no interest in placing dilapidated building exteriors at Disney Parks.

Walt’s Thoughts About The Haunted Mansion

According to Jason Surrell, a Disney cast member, Walt explained the concept personally during a British radio program interview in the 1950s.  He mentioned that he felt sorry for all the ghosts who lost their homes as old mansions were destroyed across Europe.  He wanted to build a retirement home for all the ghosts who needed a new home.

Over time the simple story of a retirement home for ghosts has evolved.  Some experts, like Susan Veness in her book titled “The Hidden Magic of Walt Disney World,” state that there never was an official story behind the Haunted mansion at Walt Disney World.

Over time, however, and perhaps in a “crowd sourcing” or organic kind of way, a story has developed. But it all seems to be an unofficial story.

The Most Popular Back Stories

One version of the back story behind the Haunted Mansion is that a rich businessman, Master Gracey, held his wedding on the lawn of his Florida mansion.  As the festivities of the day progressed, the party moved inside.  Everyone was dressed in their finest clothes and there was a ballroom full of people dancing and enjoying the festivities.   The party decided that a game of hide and go seek would be fun. The bride decided to look around the attic of the home.  She climbed into a trunk to hide.  In a tragic accident she suffocated and died.  Her husband was so upset that he hung himself.

Another back story is that the bride was a woman named Constance – a black widow bride.  She murdered her previous five husbands.  There are elements of this story in the attraction too.  You can see an image of a “Constance-like” figure with a huge knife in the ride following the 2007 refresh and upgrade of the attraction.

Another interesting back story that many Disney cast members will share is that of the bride’s ring.  Many say her wedding ring is eerily imbedded in the cement at the exit.  In reality, that “ring” is actually what is what is left of a cut off metal pole that couldn’t be completely removed.

There doesn’t seem to be a single, official story behind the Haunted Mansion in the Magic Kingdom.  But thinking about the variations can add a fun element to visiting the home of 999 happy haunting ghosts.

Walt put two Imangineers in charge of developing the special effects for the original Haunted Mansion – Rolly Crump and Yale Gracey.  In their large studio, the pair created some amazingly frightening special effects.  Disney legend has it that the effects frightened the night time cleaning crews so much that management requested that the Imagineers leave the lights on and turn the  effects off at the end of each day so as not to scare the cleaners.  Instead, the Imagineers decided to have some fun – they not only turned off the lights at night but also hooked the effects up to motion sensors so that they would automatically begin their haunting when they detected movement.  When Rolly and Gracey came to work the next day, all the special effects were still on and there was a broom laying in the middle of the room.  Management told the mischievous Imagnineers that they would need to clean the area themselves from then on since the cleaning crew would not return.

While the Imangineers came up with some amazing effects, Walt himself didn’t like how the attraction was coming along – and the project was put on hold.

After some previews, soft openings, and cast member trials, the original Disneyland Haunted Mansion opened in the summer of 1969.  It brought record crowds to the park, which helped the Disney company recover financially from the attendance drop off it experienced after Walt died.

The Haunted Mansion at Disney World’s Magic Kingdom was one of the original attractions that opened when the park opened in October of 1971.  The effects and ride mechanisms for the Disney World version of the Haunted Mansion were actually built at the same time and in the same place as the Disneyland version.  This resulted in two attractions that are very similar.  However, the show building – which is hidden behind the facade of the mansion, is slightly bigger at Disney World.  This allowed the Imagineers to add some new scenes that don’t exist at Disneyland.

In Disneyland, the mansion is French-inspired and faces New Orleans Square.  However, there is no New Orleans Square at Disney World.  Since the Disney World Haunted Mansion faces Liberty Square, it is architecturally different – based on a Dutch-inspired Gothic Revival style that is typical in the northeast United States.  This style is especially prevalent in New York and Pennsylvania.

The Haunted Mansion is a timeless attraction and a favorite for generations.  In fact, it has spawned its own series of fan sites like the Doom Buggies site.

While it is spooky in nature and the dark scenes are not appropriate for little children, it is an attraction that people of all ages enjoy.