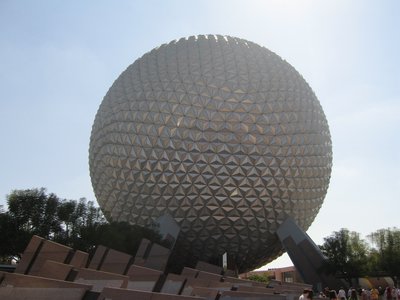 Disney World’s Epcot is one of the four theme parks located within the Disney World Resort. The more than 300 acres include two general areas: Future World and the World Showcase. World Showcase is the more expansive of the two areas and includes a series of pavilions each highlighting a separate country.

Walt Disney originally envisioned Epcot as a functioning prototype city, where residents would be surrounded with the most advanced urban technology. After Walt’s death, the Walt Disney Company decided to turn the area into a park celebrating human technological and cultural achievements.

Future World is the smaller of two areas located in Epcot, with pavilions that focus on different areas of human technological advancements. Here you will find interesting attractions featuring science, space and technology.

There is no future without the past. That is why the designers of Future World included this look back at the history of man. Realistic animatronics will help to tell the story of life on earth during the Spaceship Earth attraction. While in the vehicle that will take you on this journey, you can get an idea of what your life might be like in the future by using the touchscreen monitors located in each car. The ride is location in the enormous geodesic sphere that has become the official icon of Epcot, and which also houses the Project Tomorrow post-show exhibit.

The Land is dedicated to the land on which people live, and celebrates everything from the natural beauty of the land to the many resources it provides.

Soarin’ is a very popular simulator ride that takes guests flying over sights from the beautiful state of California. Using helicopter footage, a wraparound screen, wind and scent effects, and chairs that lift into the air and move with the motion of the film, Soarin’ creates a thrilling and realistic sensation of gliding – with some incredible scenery for good measure.

Living with the Land

Many rides at Epcot are designed to be educational entertainment, and Living with the Land is one of the best examples. The attraction takes guests on a slow-moving boat tour of a series of greenhouses, highlighting state-of-the-art agricultural technology. Riders get to see where Disney grows much of its produce for use in restaurants around the resort, as well as take an up-close look at alligators and fish. You can even spot pumpkins growing in the shape of Mickey Mouse!

The Circle of Life

This brief film stars Timon, Pumbaa, and Simba from Disney’s The Lion King. The characters use the film – aimed mostly at children – to teach beginning lessons about environmental awareness and conservation.

If you ever wanted to know what it felt like to head to space, this is your chance. The Mission: Space Attraction is a motion simulator that will give you all of the sensations of take-off and traveling from Earth to the planet Mars.  This is considered a thrill ride that includes tight spaces and high G-forces, although a less intense version of the ride is available to guests – just be sure to select the Green Team!

This pavilion is also home to the Advanced Training Lab, where kids can explore and compete in an interactive play area.

Innoventions is a large pavilion with two wings where visitors can participate in a wide variety of interactive games about innovation and important technology. These experiences include designing your own roller coaster, learning about financial planning with the Great Piggy Bank Adventure, and experiencing what it is like to be inside a major storm system.

The Universe of Energy contains a single ride, but it’s an extensive one. Ellen’s Energy Adventure last over half an hour, taking guests on a ride through the prehistoric development of our modern energy resources. Hosted by Ellen DeGeneres and featuring Bill Nye the Science Guy, the ride manages to entertain in spite of its length.

Test Track allows visitors to design a custom vehicle before strapping in to take the vehicle for a thrilling ride around the track.

Hop aboard a clam shell shaped clamobile and take a journey through the teeming coral reefs and undersea world from the film Finding Nemo. The many beautiful sights make The Seas both educational and entertaining.

Guests to this pavilion may also enjoy an animated (in both senses!) discussion with Crush the sea turtle at Turtle Talk with Crush, wandering in the Caribbean Coral Reef Aquarium, or eating at the Coral Reef Restaurant.

Imagination! is home to the Journey into Imagination with Figment Omnimover ride starring Eric Idle and a mischievous dragon. This pavilion also houses the ImageWorks exploratory lab, and the 4-D show Captain EO starring Michael Jackson.

Visitors to the World Showcase are able to take a “trip around the world” as they meander from one pavilion to the next, enjoying the sights, sounds and tastes of various countries. The countries featured in the World Showcase area are Mexico, Norway, Canada, China, Germany, Italy, United States, Japan, Morocco, the United Kingdom, and France.

The majority of Mexico Pavilion sits inside a replica of a towering Pre-Colombian pyramid. Inside, a permanent twilight illuminates a Mayan pyramid, a smoking volcano, and colorful shops selling authentic Mexican goods. Grab a meal at one of three dining establishments in Mexico, or take a river journey on the Gran Fiesta Tour starring the Three Caballeros.

The top attractions at Norway Pavilion are the adventure ride Maelstrom and the Akershus Royal Banquet Hall. Maelstrom is a thrilling cruise through troll-infested swamps and howling tempests, while the Royal Banquet Hall is home to a character dining experience allowing guests to enjoy breakfast, lunch, or dinner in the company of Disney princesses, in a setting fit for royalty.

China beckons from beyond the triple-arched ceremonial gate of the pavilion. Inside, you will find peaceful Chinese, recreations of the famous Terracotta Army and the 1st emperor’s tomb, jaw-dropping acrobat performers, and a couple of place to eat authentic Chinese food.

Stepping into Germany may remind you of stepping into Fantasyland, and with good reason – Germany was the home of the Brothers Grimm and the source of all of their well-loved fairytales. Enjoy German food and beer at the Biergarten Restaurant, or meet characters from the movie that started it all: Snow White and the Seven Dwarfs.

The Italy Pavilion is an architectural tribute to Venice, and an alimentary tribute to Italian cuisine from all regions of the country. This is a wonderful place to enjoy any meal of the day, shop for luxury items, or simply admire the elegant detail of the buildings and features.

The American Adventure consists of a single large Colonial-style mansion and courtyard. The showcase piece of this pavilion is the show of the same name, which uses music, film, and audio animatronics to tell the history of the United States.

Japan is the place to enjoy the sounds of taiko drumming, the tastes and smells of sushi or teppan yaki, or the sight of beautiful White Heron Castle towering in the background of the Pavilion. Mitsukoshi department store offers everything from Hello Kitty products to traditional Japanese clothing.

You almost feel that you can get lost in Morocco, as you pass from the open courtyard of the Ville Nouvelle to the winding paths and hidden corners of the Medina, or old city. The bazaar in the Medina is a wonderful place to shop, and diners at Restaurant Marrakesh may enjoy watching belly dancers as they eat.

You will probably recognize the iconic Eifel Tower looming towards the rear of France Pavilion. Plentiful wine and perfume can also be found here for purchase. There are several dining options, but be sure to make your reservations way in advance in you ant to eat at the popular Bistro de Paris.

The United Kingdom Pavilion is full of British icons, from the bright red telephone boxes to the thatched-roof perfection of Anne Hathaway’s cottage. Visitors should be sure to grab a pint or some fish and chips at the Rose & Crown Pub, or wander around the extensive gardens.

The Canada Pavilion features everything from a landscape derivative of the Canadian Rockies to a Victorian-era hotel inspired by Ottowa’s Chateau Laurier. Le Cellier Steakhouse is one of the best dining options to be found at Epcot.