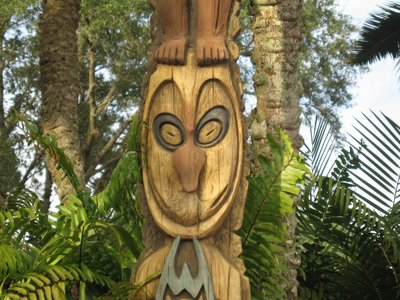 Finding the fun in hidden details something especially fun to do in Adventureland.

If you look at a map of the Magic Kingdom, the lands relate to each other just as countries do.  Head west from Fantasyland and you leave medieval England, across the Atlantic, and into the new world of colonial America and Liberty Square.  Head further west still and you reach the Wild West of the new, untamed western America.  Head south from America and where do you go?  You explore the adventure Mexico, Polynesia, and the Caribbean.

Walt Disney himself said that he wanted to create a land that was far from civilization, a place that felt like a remote jungle.  Overgrown plants, conga drums, animal statues, and south Pacific architecture come together to transport you to a primitive and exciting place.

One of the most beloved attractions in Adventureland is Pirates of the Caribbean.  This attraction was the last one that Walt Disney himself personally helped design – it opened just three months after his death.

Set in the 1700s, you float through scene after scene of stylized pirates plundering and looting.  But before you ever get to the boats, the attraction queue provides some interesting details.   Shortly after entering the queue look for a window on the right with bars.  You will see two skeletons playing chess.  This is in honor of Disney Legend Marc Davis.  Marc was an acclaimed artist and one of a group called “Disney’s Nine Old Men”   who were at the core of many of Disney’s classic works.  Marc loved chess.  He actually researched “no win” scenarios of chess and set up the chess boards so that nobody could ever win the game – and thus the skeletons sit forever pondering the state of their game.

Marc also put his signature on the last scene of the ride, which is filled with gold and bounty.   Look for a crest of arms representing the “Marco Daviso” family.  You will also see chess pieces in the crest.

Earlier in the attraction, as you pass under a bridge you can look up and see a pirate with his leg hanging down over the edge of the bridge.  If you look closely you can see hair on his leg and dirt on the bottom of his foot.  The attention to detail is amazing!

As you exit the attraction on the inclined moving walkway, check out the footprints – one shoe and one peg leg.  There is certainly a place where pirates rule.

The queue area for the ride resembles an adventure outpost scattered with tools, gear, and photos.  Four distinct sections of the queue can be opened or closed depending on the number of people waiting for the attraction.

Across from the loading area is a small hut with a thatched roof.  Or at least it looks like a thatched roof.  Since the Florida weather would beat up a real thatched roof, this one is actually made out of metal strips.  The Disney designers always find interesting ways to overcome design and environmental challenges.

Another interesting prop in the Jungle Cruise is part of a crashed airplane.  It is actually the back half of a Lockheed Electra 12A.  The other half of the plane is used as a prop in an attraction called The Great Movie Ride in Disney’s Hollywood Studios, where it is used to recreate the famous good bye scene with Humphrey Bogart and Ingrid Bergman in the classic movie Casablanca.  There is great debate about whether the plane at Disney is the actual plan used in the movie.   Disney expert Werner Weiss thinks that the plane could be the one actually used in the 1942 movie.

Here is another interesting story about The Jungle Cruise:  Legend has it that Walt Disney himself overheard a mother who was visiting Disneyland with her child talking about the Jungle Cruise.  The mother told her child that they didn’t need to ride the Jungle Cruise since they had already ridden it and so they didn’t need to ride it again.  Disney was horrified and asked his Imagineers to upgrade the ride – and thus the time honored tradition of “plussing” or continuously upgrade attractions was born.

The skippers, or captains of the ships, are well known for their humorous delivery of the script, or spiel, explaining the adventure as your boat moves along the river.  Listen carefully for all the puns and funny lines.

The Magic Carpets of Aladdin

This twirling ride is much like the Dumbo They Flying Elephant ride in Fantasyland.  You board magic carpets and, for a little more than a minute, you can control the carpet’s movement up and down as the attraction spins.  Kids of all ages seem to enjoy controlling their carpet.  Watch out for the camel near the entrance to the attraction – it does spit!

Based on Disney’s 1960 movie called “Swiss Family Robinson,” the tree house is a walk-through attraction where you can see and hear about how the Swiss family lived when they were stranded on a deserted island.  From the kitchen to the bedrooms, you can imagine what life might be like if you had to go without any modern conveniences.  The tree itself is actually constructed of concrete and is about 60 feet high.

Interestingly, the original design of Adventureland in Disneyland borrowed heavily from the popular Tiki culture, which swept the United States in the 1950s.  Disney picked up on this popular them his own Tiki attraction.

In 1998 the show was updated and reopened as The Enchanted Tiki Room: Under New Management.  It featured characters and original voice talent, including Gilbert Gottfried, from the movie Aladdin.  It has since been restored to its original design.

As you make your travels through Adventureland, enjoy the details and the back stories that make this Magic Kingdom land a place for amazing journeys.