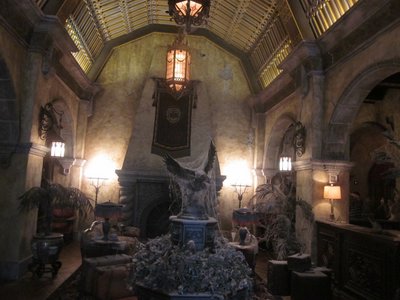 Different people want different things out of their Disney World Resort experiences. One of the popular activities involves finding which ride is the scariest. For some, it is the drop of a roller coaster, such as can be found on Space Mountain or the Rock n Roller Coaster. Others have the need for speed, such as can be found in Epcot’s Track Test ride. Still others just want the thrill of the unknown, and one of the best places to find that at Disney World is at the Twilight Zone Tower of Terror ride.

The backstory behind the Twilight Zone Tower of Terror is something ripped right out of the type of creepy out-of-this-world story that one would find on the 1960’s television show The Twilight Zone. Disney designers wanted to be sure that the story and the ride captured the flavor of the show, so they did a lot of research. How? They did it by watching every single episode of The Twilight Zone – all 156 episodes – two or three times each.

The story that they came up with is just as unreal as what you may have seen on an episode of the television show:

In 1939, some stars of the motion picture industry checked into the Hollywood Tower Hotel. Of course, this hotel was the grandest in the city, and served only the most exclusive clientele. It was a stormy night and, not wanting to wait for the passenger elevator, a group of five entered the service elevator instead. As they rode to their destinations, lightning struck the hotel. When the elevator doors opened, there were no people there. The five passengers of the service elevator would never be seen again.

Guests preparing to ride on the Twilight Zone Tower of Terror learn this backstory as they wait their turn in the queue tower. Here, time has stopped in 1939. It looks as if the whole world just walked away and left this time capsule: an old newspaper casually tossed on a table, tea and a few sweet treats left untouched on a tray.

Rod Serling, the original creator and narrator of The Twilight Zone television show, narrates the story in a library.  The doors open and you enter the basement of the Hollywood Tower Hotel.  Before you know it, it is time to step into the service elevator for your own ride into the Twilight Zone. As you ascend and descend the floors of the tower, the doors of the elevator open and close revealing various scenes. All the while, Serling’s narration continues.

At one point, the elevator opens to reveal five figures, dressed as they may have been in 1939. Suddenly, a bolt of lightning causes blackness to descend. When the lights come back on, the figures have disappeared.

As you move through the various floors, the elevator in which you ride will seem to move in and out of the elevator shaft. When it comes time for the drop sequence, the real thrills begin. Riders are dropped with such force that many fly out of their seats – in a safe way, of course.

Add to the physical force of the ride an element of surprise and the ride becomes even more thrilling. The element of surprise comes because there is no set order for the drop sequences. You may go up or down in any number of ways. No matter how many times you ride on the Twilight Zone Tower of Terror, you will never know when to expect the next drop since the ride is programmed to randomly build the sequence of drops, lifts, and effects. Disney puts it this way: “It’s never the same fear twice.”

As is the case with many attractions and rides at Disney World Resorts, the technology for Twilight Zone Tower of Terror was developed specifically for this attraction. For example, the ability to move the car in and out the elevator shaft was a new technology. It is this ability to not only move up and down within the elevator shaft but also in and out of it that allows for the feeling of traveling to the 5th dimension to be realized.

As mentioned above, the drops cause many visitors to rise out of the seat of the cab. While some rides with drops just let gravity do all of the work, the engineers that created this ride took it a step further. The cabs are actually pulled down. This, along with the force of gravity, causes the drop to happen so fast that the out of the seat effect occurs.

Remember those 1939 figures that suddenly disappear? That effect is created by using a technology called “pepper ghosts”. Pepper ghosts are commonly used in live theater as well as in many thrill rides and attractions. Special lighting and pieces of angled plate glass are used to create the illusion that something that was just there is suddenly gone. You will also see the use of pepper ghosts in Disney World’s Haunted Mansion and a few other attractions.

Twilight Zone Tower of Terror is not a ride for little children. You must be at least 40 inches tall to experience the thrills of this ride.

FASTPASS can be used on this ride. FASTPASS is a free service that allows you to drastically cut down on the amount of time that you spend waiting in line. You simply take a ticket that tells you at what time you should return to the Twilight Zone Tower of Terror. When you return at the appointed time, you will have a much shorter wait.

Twilight Zone Tower of Terror is located on Sunset Boulevard in the Disney’s Hollywood Studios theme park. While you are there, be sure to check out some of the other awesome rides, shows and attractions such as The American Idol Experience, the Academy of Television Arts & Science Hall of Fame, Disney Junior – Live on Stage, Muppet*Vision 3D, Rock n Roller Coaster and the Studio Backlot tour.

While the Twilight Zone Tower of Terror is only for bigger kids and adults, there is something for every member of the family the Hollywood Studios theme park. You will definitely want to set aside at least one full day to enjoy all of the exciting rides and attractions in this park.