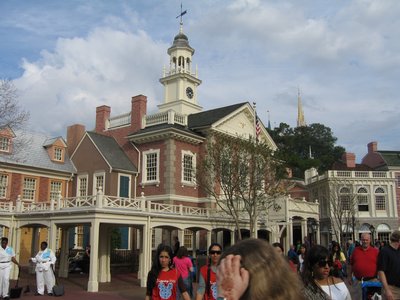 A great example of this is the Magic Kingdom’s Liberty Square – a slice of America as it existed in the late 1700s, just as the birth of a new country called The United States was taking place.

Before The Square Was A Street

Disney designers originally came up with the concept of a Liberty Square as an add-on to Main Street USA at Disneyland.  That didn’t happen, but like most ideas at Disney, the concept didn’t die but rather matured into something different.  When designing the Walt Disney World Resort in Florida, Imagineers decided to bring back the concept as a full-fledged “land.”

Time Travel:  From Medieval To Colonial

As you leave the medieval time period represented by Fantasyland , you cross a footbridge which symbolically takes you over the ocean and to the United States eastern seaboard – the New World across the Atlantic.  There are four time periods and places represented in Liberty Square:  New England, Colonial Williamsburg, New Dutch, and the Hudson River Valley.

What Year Is It?

Many of the doors in Liberty square have a two digit number on them, like a street address.  For example, one door has a “19” on it.  If you put “18” in front of the number on the door, you get a year like “1819,” which represents the year in which that architectural style would have been seen.

In some of the upper windows you will see rifles.  This was something commonly done during Colonial times.  The resident of the house made a statement that he was ready to fight when needed.

Hungry For Some Good Food?

The Columbia Harbor House is a quick service restaurant that serves lunch and dinner and featuring seafood, but with plenty of chicken and fries.  There are interesting details in this restaurant that connect it to the nearby Haunted Mansion.  For example, the restaurant contains a map of ships lost at sea, and each section of the restaurant is named after a ghost ship.

A Huge Tree In The Square

The giant Liberty Tree sites in the center of the Liberty Square.  The tree is an actual 100-year-old oak found on Disney property and transplanted to its current location.  The tree was originally found several miles from its current location.  And it was – and is – very big:  more than 40 feet tall, and weighing more than 35 tons.  At the time around 1970, it was one of the biggest trees ever to be transplanted.  Disney Imagineers had to drill holes through the trunk and insert metal rods that could be attached to a crane.  After the tree was moved and re-planted, the workers replace the wood bores.

But what does a big, old tree have to do with early America?  As with everything at Disney, there is a purpose and a story to everything you see.  The term “liberty tree” actually meant something special to colonial settlers.  It was a place to meet, hang bulletins, and became a rallying point for the Revolutionary War to the citizens in Boston.  From the tree hang 13 lanterns – each one representing one of the thirteen original United States colonies.  The lanterns are also a symbol that marked the repeal of the Stamp Act.

The three main attractions in Liberty Square are The Hall of Presidents, the Haunted Mansion, and the Liberty Square Riverboats.  Each of these attractions existed when the Magic Kingdom opened in 1971.  They have all been updated slightly over the years but are basically the same as when the park opened.  Sometimes, when something works, you just don’t have to change it very much!

The Hall Of Presidents

The Hall Of Presidents is a tribute to the men who helped build America.  When you enter the building you will be able to view display cases filled with memorabilia from past US Presidents, going all the way back to George Washington.  As you enter the main theater and sit down, you watch a movie that tells about the turbulent history that made the USA.  Then, the screens raise and part, and in time you see a set of animatronic recreations of all the US Presidents.  The show includes a special speech by Abraham Lincoln.  It is only fitting, since according to the official Disney web site, Walt himself was fascinated with the life of Lincoln, even to the point of delivering the famous Gettysburg Address to his classmates.

This slightly scary mansion has been a crowd favorite since it opened as an original attraction at the Magic Kingdom in 1971.  It include a walk through component (the infamous stretching room) and a ride portion where you get to view everything from an endless hallway to an amazing ballroom scene.  There is nothing bloody in the Mansion, and it is generally considered a ride that is appropriate for all ages.  However, there is plenty of darkness so use discretion on whether or not the experience is appropriate for little children.

Sit back and listen to Mark Twain tell you about the sights as you can travel the Rivers of America in style aboard a paddlewheel steamer.   Even though you board the huge ship from the bustle of Liberty Square, you will travel through remote areas and past Big Thunder Mountain Railroad – feeling like you have entered a different, calmer, and quieter world.

Liberty Square is a wonderful example of Disney Imangineering and detailing at its best – from crowd-pleasing attractions like The Haunted Mansion to quiet get-away areas like Tom Sawyer Island and authentic paddlewheel boats, Liberty Square can help you relive a grand time in history.