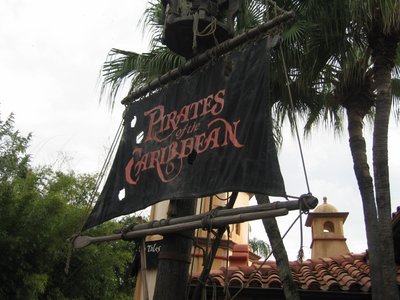 Pirates Of The Caribbean Attraction

It’s difficult to believe that this iconic song, one that has become such a part of American popular culture, was composed specifically for a mere theme park ride. Such was the care and originality that Disney devoted to the creation of the Pirates of the Caribbean attraction at Disneyland and Disney World’s Magic Kingdom, and it is part of the reason that this ride has developed such tremendous popularity.

The Magic Kingdom and Disneyland are the two most visited theme parks in the world, together eclipsing the 3rd-place finisher by an immense margin, and Pirates of the Caribbean may very well be the most widely recognized attraction at these two destinations. The release of the first of four (so far) Pirates of the Caribbean movies in 2003 injected new life into a ride and brand that were overseen by Walt Disney himself, and first introduced to the public in 1967.

Log flumes were originally built by the lumber industry to transport timber downstream to be processed at sawmills. Today, log flumes refer to a style of amusement park ride wherein visitors board artificial hollow logs or boats and float along the flume, propelled by the flow of water circulated through the ride.

Pirates of the Caribbean is a log flume style dark ride, in which visitors float along in the water (in a track, actually) that takes them through pirate battles, pirate carousing in the town of Puerto Dorado, and scenes of pirate treasure caves.

Pirates of the Caribbean is a relatively sedate ride, and the boats float along at a leisurely pace that can be enjoyed by visitors of all age. The only exception is a 14-foot drop down a ramp at the start of the ride, after which the boats travel through a large area underground. This drop is just enough to make your stomach leap momentarily into your throat, and those sitting at the front of the boat might get just the slightest bit wet from the splash at the bottom of the chute.

The Magic Kingdom’s Pirates of the Caribbean begins in a golden Spanish-style fort called the Castillo Torre del Sol. The period atmosphere of the fort, the twisting caverns that take you closer to the boats, as well as the strains of macabre music and ominous warnings that filter up from the main caverns of the ride, make this one of the more enjoyable places at the Magic Kingdom to wait in line and eagerly anticipate the upcoming adventure.

The ride begins in Pirate Cove, a dark and cavernous room where boats appear along a narrow flume with seating for approximately 30 passengers at a time. The boats travel down a very short drop and into a grotto, where Blackbeard and skeletons of dead pirates languish in the dark. From there the boats enter the hurricane lagoon, where a pirate ship with a skeletal captain at the helm is being tossed in a rough storm. As the boats pass the lagoon they head towards a waterfall, on which the projected head of Blackbeard or Davy Jones can be seen and heard to utter the grim warning, “Dead men tell no tales.” At this moment, the boats take the plunge down the 14 foot drop to continue the journey.

The first stop along the underground journey is an epic battle between a pirate galleon and a Caribbean fortress. Cannonballs seem to wiz through the air and land in the water all around as the two enemies fire at each other and issue threats – and you are in the middle of the action.  Rushes of air and bursts of light and water help to bring a thrilling realism to this cannon battle.

The next stop on the ride is the lawless and hedonistic pirate port of Puerto Dorado, where gluttonous, thirsty, and greedy pirates pursue food and alcohol to excess while in futile pursuit of treasure. Audio Animatronic characters bring this lively scene to life, from rum-soaked pirates serenading pigs and alley cats, to the town mayor receiving an unwanted dunking in the well. Maidens defend their food and their virtue from the invaders, while several building of the town glow with flames from fires set by the marauding pirates.

These scenes are distinctly tongue-in-cheek, and probably the most lighthearted and amusing depictions of pillaging and destruction that you are ever likely to encounter. The scenes are also extremely detailed, and several return rides are necessary in order to fully appreciate  all of the little interactions and vignettes in every corner of the ride.

Get Out Of Jail Free?

The boats next pass by a scene famously recreated in the first movie, in which several imprisoned pirates do their best to entice the jail dog to bring them the cell keys he carries in his mouth. You have to admire their determination – after 40 years they still haven’t given up!

The next scene is a lively battle in a storage room, in which pirates dangerously fire pistols and cannons at each other in spite of the boxes of gunpowder that fill the room. Once again, visitors can feel blasts of air as bullets and cannonballs seem to fly directly overhead. The end of the ride takes visitors past a treasure room piled with gold and jewels – the fabled treasure for which all the pirates in the ride have been searching.

An Oldie, A Classic, And A Well Loved Voyage

Although the Magic Kingdom ride has been around since shortly after the park’s opening in the 70s, the Pirates of the Caribbean films inspired Disney to make some changes to the iconic ride in order to better tie the ride and movies together. The changes are fairly slight, and characters from the films have now been incorporated into the existing scenes – in a “life imitates art imitates life” kind of way.

Captain Barbossa is the first to appear in the pirate ship attacking the Caribbean fortress, and he can be heard demanding that the fortress turn over Captain Jack Sparrow. Captain Jack himself appears repeatedly throughout the ride, and his animatronics stand-ins bear an impressive resemblance to Johnny Depp, who portrays Sparrow in the films. He can first be spotted at the mayor’s dunking, and later popping up from a barrel to look over the shoulder of another pirate perusing a treasure map. The final triumphant scene of the ride shows Captain Jack standing blissfully atop the mountain of treasure, and is you listen closely you can hear him singing a few bars of “A Pirate’s Life for Me.”