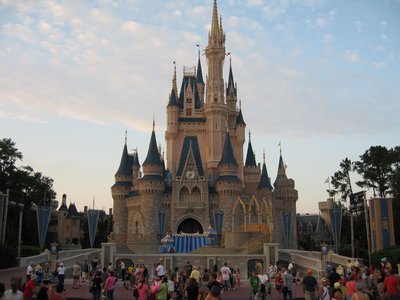 This park is the oldest and the smallest of the Disney theme parks – at around 107 acres it is a speck on the 47 square mile landscape of Disney World. Even so, this small and venerable park is by far the most popular location at the resort, and the most popular theme park in the world.

Of the four theme parks, Magic Kingdom is the park meant to appeal most strongly to children and families. It features many slow-moving dark rides and other child-friendly fare, with fun and exciting sights around every corner. Many of the attractions feature famous Disney characters and locations, but many others were created by Disney Imagineers specifically for their theme parks. A few thrill rides, as well as the tremendous attention to detail, has helped to make this park popular with all ages in spite of the family-friendly focus.

Layout and Lands of Magic Kingdom

Magic Kingdom is laid out like a wheel, with the hub at the center and the five lands with different themes set around the outside of the hub. Visitors enter the park and travel to the hub along Main Street, U.S.A. and can then visit either Frontierland, Adventureland, Liberty Square, Fantasyland, or Tomorrowland. Directly beyond the center hub is the awe inspiring Cinderella Castle, a 187-foot tall structure that can be seen throughout the theme park. This magnificent fairytale palace is the icon of Magic Kingdom, and one of the most widely recognized icons around the world.

This street is meant to represent an idealized town square in America at the turn of the century – the kind of main street that Walt Disney remembered from his childhood in Marceline, Missouri. The area does not feature any major attractions, but it is lined with detailed shops and beautiful window displays. Many guests hurry down Main Street to get to the most popular Magic Kingdom attractions, but admirers of Disney’s impeccable theming and attention to story and detail will find this area well worth their time.

Adventureland is the first land to the left as visitors leave Main Street. This land is dedicated to adventurous locations and people from around the world, from the Swiss Family Robinson and their tree house in the East Indies, to explorers cruising down a river in the African jungle in The Jungle Cruise. This land is perhaps best known for the Pirates of the Caribbean attraction, the dark log flume ride that inspired the popular film franchise. All of the rides in Adventureland are open to all ages, although the battles and pirate skeletons of Pirates of the Caribbean, and the large animatronic animals of the Jungle Cruise may be a bit scary for the youngest kids.

Frontierland is a popular location with older visitors thanks to the presence of two of Magic Kingdom’s three thrill rides. Splash Mountain and Big Thunder Mountain Railroad form twin landmarks in this land themed after the American Wild West. Splash Mountain is a log flume inspired by the Disney classic film Song of the South, and the ride concludes with a breathtaking five story drop. Big Thunder is a roller coaster based on a runaway mine car, and it rumbles through an old mining town and up and down tunnels in the mine itself.

For visitors who don’t meet the 40 inch height requirement of these two rides, Frontierland has some milder offerings available. Tom Sawyer Island has caves, mills and floating bridges to explore, while the Country Bear Jamboree is a great place to escape from the sun and enjoy a humorous country music show.

Tomorrowland is all about technology and the future, with rides dedicated to space travel, futuristic transportation, and other science fiction staples. Children and families will enjoy the Astro Orbiters, Buzz Lightyear’s Space Ranger Spin, and the Tomorrowland Transit Authority. The classic attraction called The Carousel Of Progress tells the story of technology improvement over time.  Older guests in search of excitement will want to ride Space Mountain over and over again, and may also enjoy testing their racing driver chops on the Tomorrowland Speedway.

Liberty Square is the smallest area at Magic Kingdom, but it is home to one of the most famous and popular attractions at Disney World. The beautiful and spooky exterior of the Haunted Mansion is one of the most impressive themed locations at the park, and the funny, detailed, and slightly scary ride is an enduring classic. Liberty Square is also the boarding point for the Liberty Belle river boat, which takes guests on a beautiful tour around Tom Sawyer Island on the Rivers of America.  You can also take in a patriotic and entertaining history lesson in The Hall Of Presidents.

Fantasyland recently underwent a major renovation, expanding this extremely popular location with more land and more attractions. This is the most child-friendly land in a child friendly park, with cheerful, slow-moving rides and other attractions designed to appeal to the youngest set. Dumbo the Flying Elephant, the spinning teacups of the Mad Tea Party, and the flying pirate ships of Peter Pan’s Flight are some of the hugely popular attractions at Fantasyland.

History of the Magic Kingdom

Disneyland Park opened in Anaheim, California in 1955. It was the first Disney theme park in the world, and quickly achieved tremendous popularity. Yet in spite of the park’s success, Walt Disney himself became somewhat discouraged with the lack of additional land available and the somewhat-tacky city that was growing up around his fantasy kingdom. He disliked the ugly metropolitan and commercial buildings being so visible from his park and encroaching on the escapism of visiting Disneyland.

Walt Disney began to dream of a location where his Disney Imagineers could build a new park, a prototype utopian community, and much more without worrying about the encroachment of outside civilization. In the years leading up to Walt’s death, Disney began to buy up land outside Orlando, Florida and prepare for the construction of and extensive new resort. Although Disney himself did not live to see construction begin, many of his ideas for the new location would come to be realized, including a new park modeled on Disneyland but with a variety of changes and improvements.

Magic Kingdom opened in 1971, along with the first two Disney World resort hotels. The park was an immediate success, and although Disneyland still leads the theme park world in cumulative visitors, Magic Kingdom has eclipsed its sister park in terms of yearly visitors.