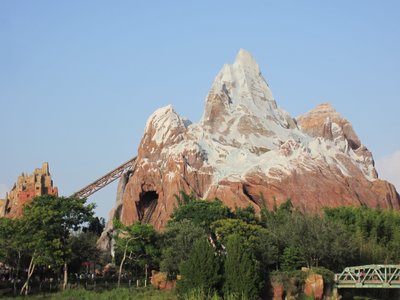 Disney’s Animal Kingdom is one of the four theme parks found in Walt Disney World Resort. Animal Kingdom boasts a number of attractions, rides and, of course, wildlife. You can see many species of animals roaming in a natural setting. There are up close animal encounters, shows, parades and more. For some Disney World visitors, however, theme parks are about one thing: rides. For those thrill-seeking guests, the Animal Kingdom theme park offers a couple of choices including Expedition Everest, located in the Asia area of the park.

The Animal Kingdom’s Expedition Everest has been in operation since April of 2006. Kick-off of the exciting new ride included acrobatic acts performed in New York City in order to let the world know about this new Disney attraction.

Building this massive ride was no small feat. It took three years of planning and building. In 2011, the folks at Guinness World Records bestowed the title of most expensive roller coaster upon Expedition Everest. The ride, which takes up more than 6 acres of space, cost about $100 million to build.

The year that it opened, the ride was named “World’s Best New Roller Coaster” by Theme Park Insider. It also has the distinction of being the first Disney roller coaster to feature cars that travel both forwards
and backwards.

Disney does not like to do anything halfway. Attention to every little detail is what makes Disney’s theme parks, movies, and resorts so spectacular. The waiting area for Expedition Everest is designed to look like a mountain village. You will pass a travel agency, presumably where you could book your mountain climbing expedition. You will also see a mountain store, where you could stock up on all of the supplies that you would need before beginning your journey.

You will also have the chance to learn about the Yeti, also known as the Abominable Snowman, from others who claim to have seen him in the past.

There are nearly 20 fake mountains in the Disney World theme parks, but this is the tallest of them all. After boarding a roller coaster car designed to look like a train car, riders start the slow ride to the top of the mountain. While some may not be paying attention, the view from the top is amazing. There are views of much of the park from a vantage point that is otherwise not available.

From there, the ride begins a series of dips, twists and turns. Because you never know when you might see Yeti, who is always lurking on the mountain, you may have to flee at any moment. Fleeing while on this ride means that the car of the coaster is suddenly thrown into reverse. As mentioned above, this ride can move forwards and backwards and will do so in an effort to avoid allowing guests to be caught by Yeti.

FASTPASS is available for this ride. FASTPASS is a free service that allows you to come back to Expedition Everest at an appointed time. When you return to the ride, you will not have to wait as long for your turn.

Guests who use a wheelchair or scooter will have to transfer to an Expedition Everest car. Guests must be at least 44 inches tall to ride this ride.

Events include a 5k run, scavenger hunt ,and many other adult and children’s challenges. There is also an after party and fireworks to round out the event.

While you are in the Asia area of Disney’s Animal Kingdom Asia, perhaps while waiting for your FASTPASS time for Expedition Everest, pay a visit to one of the many other attractions located in the area such as those described below.

There is a height requirement of 38 inches to ride this ride, but nearly every child who is tall enough will love it! Sitting on large cars that resemble inner tubes, the guests drift along the river before starting a nearly 90 foot climb. Once at the top, you will drop down and have a great chance to cool off as you are splashed and sprayed by water shooting from geysers and pouring on you as you pass under water falls.

This is one of those rides that you will want to ride again and again – especially when the temperature is up! Take advantage of the FASTPASS system to cut your wait time while you explore other areas within the park.

If you came to the Animal Kingdom theme park then you probably want to see some animals, right? The Maharajah Jungle Trek is a chance to do just that. This is a walking tour during which you will see a number of species of wildlife.

When you enter the attraction, you will be greeted by a Komodo dragon. From there you will see many animals and more than 50 types of birds. The highlight for many guests is seeing the beautiful Asian tigers.

This attraction is appropriate for all ages. Those in a wheelchair or scooter may remain in those devices throughout the Maharajah Jungle Trek.

If you get hungry after your expedition to Everest, consider stopping by the Yak & Yeti restaurant. Here you will find an array of Asian cuisine served at the table by friendly wait staff. This restaurant is open for lunch and dinner.

While in Animal Kingdom, you might also want to catch one of the many live animal demonstrations or watch Mickey’s Jammin’ Jungle Parade. Be sure to check the schedule for show times and for the times when the parade will be passing through.

Expedition Everest is a thrilling ride full of twists and turns. Make time for this attraction, so that you can tell everyone that you rode the world’s most expensive roller coaster!