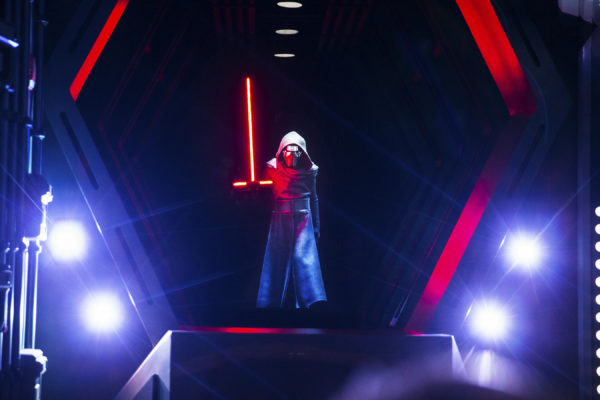 Guests come face to face with First Order Supreme Leader Kylo Ren as they race through a Star Destroyer in Star Wars: Rise of the Resistance, the groundbreaking new attraction opening Dec. 5, 2019, inside Star Wars: Galaxy’s Edge at Disney’s Hollywood Studios in Florida and Jan. 17, 2020, at Disneyland Park in California. (Steven Diaz, photographer)

Star Wars: Rise of the Resistance – Everything You Need To Know (Photos, Videos)

Star Wars: Rise of the Resistance doesn’t open until tomorrow, but I got to preview it today thanks to the nice folks at Disney Media Relations!

Rise of the Resistance is touted as one of the most ambitious and technologically advanced attractions that Disney has ever created.  After having seen it myself, I can see why it has that reputation.

This immersive experience is done on a cinematic scale. It’s hard to tell where fantasy ends and reality begins and vice versa.

This thrilling adventure combines multiple ride systems, character encounters, and a climactic battle with the First Order to put you in the story! Rise of the Resistance is also one of the longest-running attractions Disney has ever created.

The queue has lots of rock work. It feels like you’re walking through a cave or some extraterrestrial land formations, which is fitting because you’re in a temporary encampment along the outskirts of Batuu. The queue line leads you deeper into the forest among crumbling remains of an ancient civilization. You might even hear military communications along the way if you listen closely.

As you go deeper into the base, you move from crudely cut rock to storage boxes and containers and finally to more sophisticated items like screens, suits, etc.

The queue, which has a FastPass+ and a Standby line, is very long.

Check out see many more details on the Rise of the Resistance queue.

The first thing you’ll experience after exiting the queue is the Mission Briefing room. This is pretty similar to mission briefings on other attractions – it sets the stage for the story.  It also offers an improved immersive experience including a hologram of Rey.

Rey tells you that you will be heading to meet General Leia.

From the briefing room, you go through a partially outdoor area to board the transport ship where you’ll meet Lieutenant Bek.

The Intersystem Transport Ship (I-TS) is the first ride vehicle you’ll board. She ship holds about 40 people  This is a standing-room-only 3D experience with Lieutenant Bak. Fortunately, you don’t need 3D glasses for this ride!

You’ll feel like you’re lifting off the surface of Batuu and soaring into space with Poe Dameron in his X-Wing Starfighter.

Uh-oh! Before you can gain full-speed, you’re caught into a tractor beam of the Star Destroy and pulled into a hangar bay.

After leaving the transport ship and board the Star Destroyer, you’ll first enter the hangar bay of the enemy ship.

After leaving the hangar bay, you’re greeted by First Order patrol troops. They point you in the direction of the Interrogation room. This is the point where they ask you how many people are in your party like other attractions. These Cast Member “troops” refer to guests as sympathizers.

Inside the interrogation room, a Stormtrooper is on guard then Kylo Ren appears. He warns, “You have what I want. You know the location of the secret base, and I will take it from you.” He then tells the patrol to “Keep the Prisoners here; I will return to finish this personally.”

The Cast Members in this attraction have adopted appropriate personalities, but not all of the characters are real. The patrol officer and Kylo Ren in the interrogation room, while they look very real, are actually on a very large screen. What’s interesting and makes it very convincing is that lighting effects show shadows on the grates above as the characters on the screen are walking around.

While Kylo Ren is threatening his prisoners, the Resistance is busy trying to rescue you. In fact, someone from the resistance uses a laser to cut through the wall, which turns golden, heats up, and breaks open. You are rushed onto the adjoining room.

From the Interrogation Room, you’ll be moved into a trackless ride vehicle. The vehicle is actually “Prisoner Transport”, but it seems that the Resistance has commandeered the vehicle by reprogramming the droids to help you escape. You’re in for a wild ride! The vehicles do a delicate though chaotic “dance” to evade the First Order command and escape.

You’ll soon realize that the Resistance is working to help you escape but first, you’ll go through a climactic battle between the Resistance and the First Order.

The ride vehicle backs away from the Stormtroopers, but you can see their laser shots coming towards you with lighting effects on the ceiling. There’s even some sparking when the shots hit the wall and damage.

There are two large AT-AT walkers. Your vehicle swirls beneath them and eventually rises up so you can see the control room inside. The drivers spot you from the control room, and they shoot at you. As the vehicles drive, each vehicle sees different things, so your ride is different every time.

You escape Kylo Ren one more, but he makes a final attempt to catch you by cutting through the ceiling with his signature red lightsaber.

The vehicles move very fast but strategically because the large turbolasers are shooting at the Resistance ships trying to save you. These guns are about 15 feet tall, and they recoil when they shoot, so your little ride vehicle has to move carefully through to avoid the recoil.

In yet another room (the bridge), the Resistance blows out some windows, and you suddenly feel a vacuum. The audio-animatronic Kylo Ren tries not to be pulled out into space.

Finally, you make it to the escape pod! You hear a click as your vehicle clips in. There’s a window looking out into space, and you feel a drop as you move away from the Star Destroyer. This motion simulator moves and turns as you drive through space to escape the hold of the First Order and rendezvous with the Resistance. 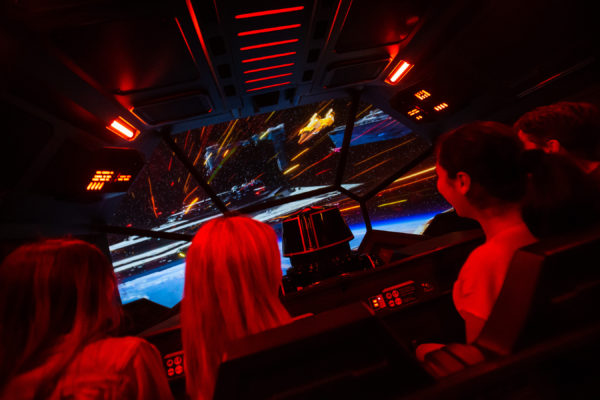 The ride finishes with your escape pod landing back on Batuu. Bek welcomes you back.

In total, the ride is about 18 minutes long give or take a few minutes depending on delays in any of the areas.

Disney has said that Rise of the Resistance blurs the lines between queue, pre-show, and attraction all while staying authentic to the Star Wars story. While I couldn’t quite conceive how this would happen, I am happy to say that this is exactly what I experienced while riding Rise of the Resistance!

The experience is so real even down to the Cast Members who have taken on the personalities of Resistance comrades or First Order guards. As I was walking through taking pictures, I was asked by a First Order guard if I was sending photos back to the Resistance. This helps with the immersion.

The first time I rode, it was a lot to process and take in.  It literally left me speechless.  Just like in a Star Wars film, there is action, motion, music, and surprise around every turn.

I expect very long lines for this attraction. Just as is the cast with Millennium Falcon: Smuggler’s Run, there is no FastPass+ available at this time.  There is no word on when FastPass might become available.

Rise of the Resistance sets a new bar for themed entertainment and combines what I consider to be the three keys of a Disney attraction:  story, theme, and technology.  It does so as a scale and complexity never before attempted.  It all comes together in an attraction that is sure to thrill crowds for years to come, and redefines what an attraction can be.

Rise of the Resistance opens in Disney’s Hollywood Studios tomorrow, December 5th, 2019 and in Disneyland’s Galaxy’s Edge on January 17th, 2020.  You might want to get in line now.

Are you excited to ride Rise of the Resistance?