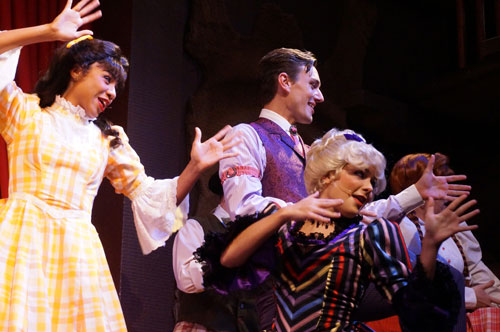 Let’s face it. If you’ve been to Walt Disney World, chances are you’ve seen a Cast Member doing a job and thought to yourself, “Wow, I wish I could have a job doing that!”

Yes, a lot of the roles in the Disney theme parks and resorts are an awful lot of fun to have.

As a Disney cast member, I had the opportunity to work as a Custodial Host, an Attractions Host, and a Front Desk Concierge. Those were all great opportunities and like any job (especially an elevator operator), they had their ups and downs. Let’s take a look at the Most Fun-Seeming Cast Member Jobs in Walt Disney World.

Oh, what might have been! Years ago, I was assigned as a Tour Guide on the Great Movie Ride and I was SO excited! Unfortunately for me, I ended up moving to a different position before I had the opportunity to actually guide my first group through the attraction.

Don’t feel too sad for me, though, as I did get to work over at Star Tours and carry a lightsaber to work every day!

The Great Movie Ride Tour Guide just seems like such a great time, doesn’t it? You get to lead a group of (somewhat) unsuspecting guests through some classic movies, you get to have a shootout with a gangster or bandit, and you even get to appear out of seemingly thin air toward the end of the attraction! I think I still have the script memorized to this day…let me see: “My name is Phil, and I’ll be your guide during this magical journey into the movies. It’s the perfect job for me because I love the movies. So, is everyone ready?!” Yep, still got it!

In my opinion, the Hoop Dee Doo Revue is the best show/dinner combination in all of Walt Disney World.

It’s been in continuous operation since 1974 and the show is honestly just as funny now as it was when it first started. Yes, the humor is a little bit on the silly side but that’s what makes it so much fun! Imagine if you had the chance to be one of those cast members who get to put on that show up to three times each night?

Now I honestly could never do it because I can’t sing even a little bit (even though my five year old tells me I have a great voice!) and I’d probably get terrified up there on the stage in front of that many people, but if you have a flair for the dramatic this would be the perfect job for you!

Another great thing about the show is it is never the same show twice due to all the guest interaction and ad-libbing by the cast members. If you haven’t yet done it, I’d wholeheartedly recommend checking out the Hoop Dee Doo on your next trip! Oh, and I didn’t even mention how good the fried chicken and ribs were!

Yes, I did mention that this was one of the roles in Walt Disney World that I was fortunate enough to experience.

This is ultimately the job that convinced me to go into planning Disney vacations for people as a career. The best part about this job is you can help make magic for guests each and every day, and that’s really what working in Walt Disney World is all about. Guests will wait in line for your expertise in dining locations, attractions, extracurricular activities, etc. And you get to be a little part of their magical vacation, which is absolutely amazing! I loved helping guests plan their days and I really think it’s one of the most rewarding Disney jobs you can possibly have! I can’t tell you how many guests came back to me later in their week or at the end of their trips to tell me just how much fun they had had due in part to my recommendations!

If you haven’t had the chance to dine there just yet, the Jungle Navigation Co. Ltd. Skipper Canteen (that’s a mouthful!) has a fantastic backstory that I absolutely love. The gist of it is that the World Famous Jungle Cruise Skippers have opened up their doors to allow fellow adventurers into their headquarters for meals. As the story goes, your server is actually a Jungle Cruise Skipper, and delivers all the same types of puns and corny jokes during your meal as the Skippers do on the attraction.

I thought that aspect of the experience was awesome and being a former server myself, I would have loved to have had the opportunity to joke around with guests as a part of the dining experience! When I was there for lunch recently my server seemed like she was having a blast and stayed in character for the entire meal!

Now, traditionally a bartender might not be looked at as the most fun job out there. Normally you’ll have to deal with all kinds of individuals and sometimes when you throw alcohol into that mix it doesn’t always make for a pleasant experience.

Trader Sam’s is a little bit different though! The bartenders there seem to be having more fun than anyone else on Disney property! They are in on every joke (even though oftentimes the guests are not!) and pull out all the stops to make everyone who’s in the bar has an amazing time!

Where else would you have the opportunity to lower a guest’s barstool so gradually that they don’t notice until they are literally almost on the floor? Oh, and if you’re wondering, yes, that happened to me last year. I all of a sudden noticed that the friend that I was with had grown about six inches since we had gotten there but it was so gradual I was oblivious while it was happening! From the songs and chants that the bartenders sing when guests order certain drinks to the normally “not very Disney” way they get to have fun with bar patrons, this would be an absolute blast of a job to have!

So Many Roles, So Little Time

What Disney job do you think would be the most fun?