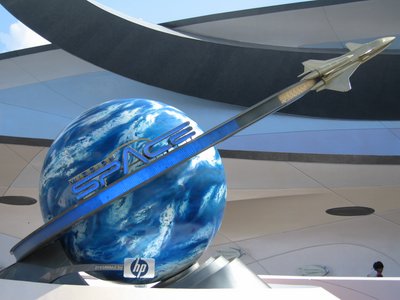 When you think of thrill rides, Disney World may not come to mind. You might instead think about Cedar Point in Sandusky, Ohio or any one of many other amusement parks that major in roller coasters that get taller and faster every year.

While Disney has built it’s well deserved reputation on rides that the entire family, from grandma to junior, can enjoy together, it also offers some very unique and very thrilling attractions. And these offerings have something that no other amusement enterprises do as well – story, great themes, and amazing attention to detail.

Here are three of my favorites.

Most simulator rides are pretty basic – you get into a box with about 30 strangers and watch a movie unfold on a screen in the front, all while getting jostled around. And that can be fun – as witnessed by the amazing 3D video and changing stories of Star Tours at Disney’s Hollywood Studios. But Mission Space in Epcot‘s Future World area definitely takes the concept of simulator rides up a notch.

Mission Space is an entirely different type of motion simulator. You aren’t in a theater with 30 people – you are in an enclosed space with three others. The story is that you are going on the first manned mission to Mars.

I remember reading about the concept for this attraction long before it ever opened, and the idea that the ride would simulate weightlessness. I wondered – how in the world will they do that? And while you only experience a slight sense of floating after your simulated blast off, it is an amazing and unique experience. You also get to experience the pull of G forces during takeoff and landing.

All told, this is an amazing attraction and a must-do for Disney thrill seekers. Just make sure that you are OK with extreme G forces and dark, tightly enclosed spaces.

This is far and away one of my favorite attractions in all of Disney World, combining amazing storytelling with terrific detail and a thrill to boot.

At the height of Hollywood’s golden age, a few unfortunate souls experienced a supernatural experience that took them from an elevator into another dimension. You get to follow in their footsteps.

The ride vehicle, which is supposed to be an elevator, doesn’t really look like an elevator at all. Yes, it appears from behind elevator-type doors, but seeing thirty-some people seated in three rows is like no elevator I’ve ever seen. But who cares?

After going up a few floors and watching a technically amazing scene unfold down a long dark hallway, you go up a few more stories and your elevator – get this – travels forward into the Twilight Zone. All this leads up to the big thrill, which includes randomly selected falls (and lifts) in the elector shaft – all specifically designed to make you feel as if you are dropping into another dimension.

In my opinion, this is one of Disney’s crowning achievements.  The Hollywood Tower Of Terror pulls together an amazing story with new ride technology and a huge thrill that will leave you with a big smile on your face.

While this is surely a debatable point, if I had to choose just one attraction to be the king of Disney thrill rides, the Rock N Roller Coaster Starring Aerosmith would be it.

Yes, it’s pretty much a roller coaster, but one that is so much beyond the ordinary. It starts with a catapult launch that takes you from 0 to nearly 60mpg in 3 seconds, and then moves directly into a loop, followed by plenty of hair raising turns, dips, and corkscrews. All this is in the dark as famous scenes from Los Angeles fly by. Cool.

This high adrenaline is wrapped into a fun story about how you are trying to get to a concert to see the band. From your tour of the recording studio to the ride entry (that looks like a parking garage) to your exciting arrival at the concert via a red carpeted area, this ride rocks. Really. If you are a fan of Disney magic and high speed rides, this one is for you.

What is your favorite thrill ride at Disney World?