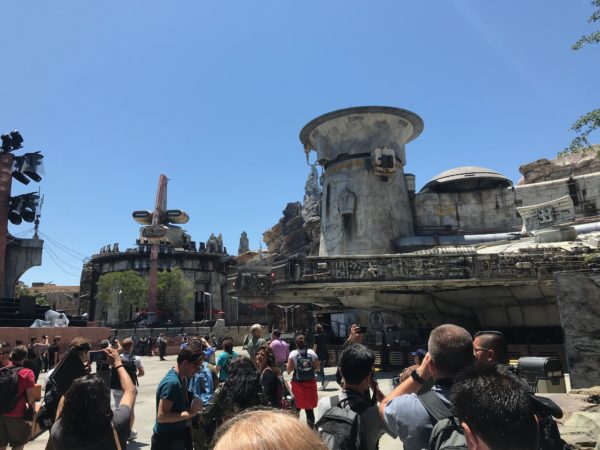 Disney promised us that when Star Wars: Galaxy’s Edge opened, it would be unlike anything we’ve ever seen or experienced before. That is maybe nowhere truer than at the new anchor attraction, Millennium Falcon: Smugglers Run.

This is perhaps the most immersive, personalized, and interactive attraction that Disney has ever built. Let’s take a look!

Chewbacca decided to bring the Falcon to the Black Spire Outpost, a sketchy spaceport at the edge of the galaxy, for repairs. The Falcon needs parts, so Chewie makes a deal with a smuggler named Hondo Ohnaka who is willing to supply the needed parts (and then some) in exchange for using the ship to transport cargo.

Hondo, a Weequay pirate and favorite character from Clone Wars and Star Wars Rebels, has only been seen in animated form on a television screen, but he now appears live (in audio-animatronic form).

Hondo runs a “legitimate business”, Ohnaka Transport Solutions, and he has more cargo than he can handle. That’s where you come in. He needs some extra flight crews willing to pilot the Falcon and defend her from harm while transporting cargo without asking too many questions.

As an aside from the story, the Hondo animatronic is amazing to see.  He is fluid in his movements – and is a fun character.  Check out the video of the pre-show area with Hondo:

Hondo needs a flight crew of six at a time: two pilots, two gunners, and two engineers. The pilots fly the ship, gunners use blasters and missiles to defend it, and the engineers must fix any damage incurred along the way. Engineers have the extra job of navigating Hondo’s “special modifications” that Honda installed for his unique missions including the harpoon.

It should come as no surprise that the Millennium Falcon basically transports you to “the fastest hunk of junk in the galaxy.” Disney Imagineers have made every effort to painstakingly replicate the famous airship including visiting the movie studios in the United Kingdom to examine the real thing and studying all of the archival photographs to make sure that every logo, every mark, every pipe, switch, and hose is authentic. The Millennium Falcon docked in the Black Spire Outpost is more than 100 feet long, so it’s not only authentic but also quite large!

The first thing you experience is the queue. This long, winding queue is not only designed to accommodate the massive crowds expected in Galaxy’s Edge but also to prepare you for the ride to come.

There are several pre-show areas, hallways, and flight decks to explore. For comparison, think of Flight of Passage in Disney’s Animal Kingdom’s new Pandora – The World of Avatar.  You will do quite a bit of walking before you get to sit in the cockpit.

Just before you do step into the cockpit, you get a minute to explore the famous Chess Room.  You have a short opportunity to explore the area and get a photo or two.

Eventually, you’ll board the Millennium Falcon in a pattern similar to Mission: SPACE in Epcot’s Future World in that each person has a job. The experience is much more technical and immersive though. You and your flight crew will power up the Falcon, jump to lightspeed, and then Hondo and Chewie will guide you. Don’t worry, though, you’ll know it’s your turn when the button in front of you lights up.

If you don’t complete your mission and your ship incurs damage, you’ll see it and feel it.

The ship will begin to steer differently, and the simulator is designed to adjust according to how the events play out. When the mission is over, Hondo will tell you how you did.

This giant arcade game has so many variations that you can ride again and again and have a different experience each time.  It’s also harder than it seems.  I was a pilot and did some damage to the ship.  In fact, I was such a bad pilot that i ended up owing Hondo some credits at the end of the game!

With three different jobs and a smart, interactive platform that reacts to all six guests in the ship during each ride, there are virtually limitless variations! Don’t forget to check the interior hallways the ship; if you took any hits along the way, you might see the damage as you exit.

To make one final comparison, Millennium Falcon: Smugglers run is similar to Star Tours, but it’s a vastly enhanced experience. There are sights and sounds all around this 4D experience. A big difference, which will be significant for some guests, is that you don’t have to wear 3D glasses, but the experience is very much 3D.

This attraction is quite a feat for something that was a backstage maintenance facility just a couple years ago!

If you’re at least 38 inches tall, you can fly “the fastest hunk of junk in the galaxy”!