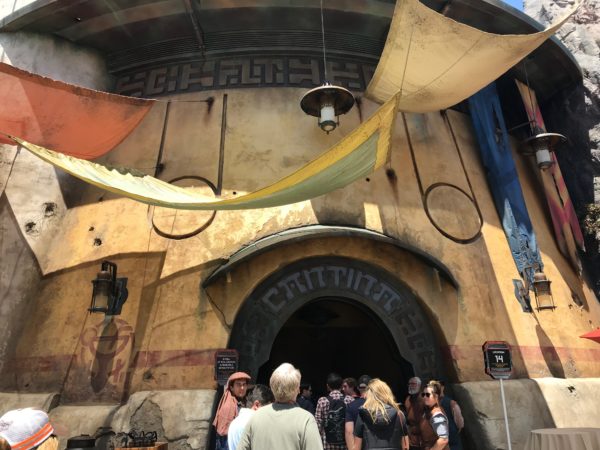 In this article, we’re going to compare and contrast the Disneyland and Disney World versions of Galaxy’s Edge.

Let’s start with the online presence of the land because this is where most guests will begin their journey.

As you can see, the websites for both coasts are very similar.

Regardless of the delay in opening, the lands are nearly identical. The main difference can be seen in the color palette, which differs because of how the landscape is lit differently on each coast.

The attractions, including Rise of the Resistance, which will not open until on December 5th in Disney’s Hollywood Studios, are identical in the experience, though, as mentioned above, the landscape outside differs.

Ronto Roasters also has a similar menu when it comes to food and specialty beverages, but the pattern continues that the Disney World version offers alcohol while the Disneyland version does not.

Of course, you can get the outpost popcorn at Kat Saka’s Kettle on both coasts as well as Blue Milk at the Milk Stand.

Savi’s Workshop allows you to build your own lightsaber. The experience itself is identical, and even the cost is the same.

The Droid Depot is a workshop with random parts and some friendly locals who can help you build your very own BB-Series or R-Series droid. Like Savi’s Workshop, the Droid Depot’s appearance and cost are identical on both coasts.

Dok Ondar’s Den of Antiquities sells off-the-shelf merchandise including versions of the lightsabers and the droids. The selection and inside appearance are identical on both coasts.

A quantifiable difference can be noted in the entrances. Disneyland has three entrances, while Disney World only has two: one at Grand Avenue and one from Toy Story Land to Batuu.

One major difference has to do with the logistics of the land. Disneyland required reservations for nearly a month before Galaxy’s Edge was fully open to the public.

Disney’s Hollywood Studios will have no such rule. However, there have been several preview events including for Make a Wish Families, members of the local Boys and Girls Clubs, Cast Members, and Annual Passholders. Once the land opens to the public, there will be Extra, Extra Magic Hours available along with extended park hours for Disney’s Hollywood Studios to maximize guests’ access to Galaxy’s Edge.

Any compare and contrast discussion leads naturally to thce question, “Which one is better?”. Well, the differences are so insignificant that the question is irrelevant. They’re both fun, and I think it’s cool that Disney has made something available on both coasts. In fact, this is the first time that they’ve ever built twin lands.