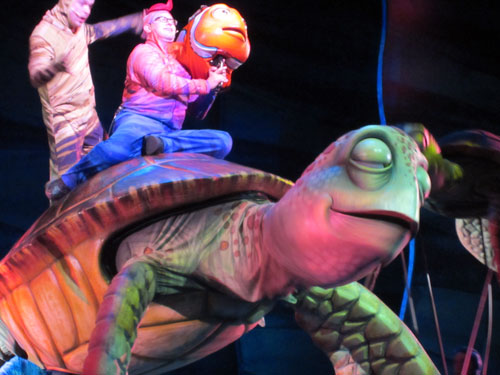 When you visit Walt Disney World, you expect to wait in lines, but one line we don’t think about until the need arises is the line for the restroom.

With so many people visiting Disney World theme parks every day, the restrooms are bound to be packed, but fortunately there are a few restrooms that seem almost immune to the huge crowds.

Some of these restrooms are hidden in plain sight amongst the elaborate theming while others are simply tucked away down hallways or between buildings.

Let’s take a look at these hidden restrooms!

Magic Kingdom has several restrooms hidden in the magical theming, but before you even enter the park, there is a restroom next to Guest Relations. Although this one isn’t necessarily hidden, many people walk right past it in a hurry to get into the parks. If the line for the baggage check and turnstiles seems extra long, consider stopping here before you get in line. Then, once you enter the park, you’re ready to start having fun!

One of the first hidden restrooms in the park itself is adjacent to City Hall. You’ll find that these restrooms provide lots of room and are usually less crowded than others because people are in a rush to get to their first attraction.

As you make your way down Main Street USA, you’ll come to one of the busiest intersections in all of Disney World, but if you hang a left, you’ll find an almost empty restroom between Casey’s Corner and Crystal Palace.

If you feel the need to go after the popular Pirates Of The Caribbean water ride, you can stop in the gift shop. That’s right! There is a hidden bathroom right in the Pirates of the Caribbean gift shop to the left as you exit the attraction. Speaking of attractions, there is also a secret restroom between Space Mountain and Carousel of Progress.

The final hidden restroom in Magic Kingdom is in a restaurant. Often, restaurant restrooms are crowded and very popular, but if you head upstairs in the Columbia Harbour House you’ll find a lesser known lavatory. The upstairs of this restaurant is also a great place to eat since there are several tables and very few people who know about them.

Epcot also has many restrooms. Before you scan your MagicBand, check out the restrooms to the right side of the entrance. These are often less crowded than restrooms inside the park.

If you’ve already entered the park and you feel the urge, you can stop at Spaceship Earth. One of the best concealed restrooms in Epcot is under the iconic dome. This isn’t just a great place to stop on your way in though. Since there are restrooms on both sides, this is a great place to stop whether you’re coming in for the day or leaving for the night. Want an even better tip? Watch which side is busiest and go to the other side! These restrooms will have hardly any line.

The pavilions in Epcot also have several hidden restrooms. Inside the Character Spot pavilion on The Land side is a great place to stop. This restroom can even be accessed through the Fountain View Starbucks. Speaking of The Land, one of the busiest restrooms in Epcot is in this pavilion across from Soarin‘. However, there is a restroom on the upper level of The Land pavilion around the corner from the Garden Grill. Innoventions East also houses a restroom down the hall and across from Sum of All Thrills. Journey Into Imagination with Figment also has a restroom behind the attraction.

Restrooms in World Showcase are abundant, but they often have just a few stalls and are located inside busy restaurants. Disney has obviously become aware of this problem because they’ve recently added a new, multi-stalled restroom in the American Adventure pavilion.

Even with all of the construction going on at Hollywood Studios, you can find some secret spots to go when nature calls.

Close to the park entrance, there is a restroom inside the Hollywood Brown Derby. In the morning hours, especially when the restaurant hasn’t opened yet, this is a great place to go. The hallway between the Sci-Fi Dine-in Theater and ABC Commissary is home to a hidden restroom. You can also access it from the door to the right of the Sci-Fi Dine-in restaurant.

There are also restrooms close to some popular attractions. At the entrance of Lights, Motors, Action!, there is a spacious and often empty restroom. Unless you happen to arrive a time when Lights, Motors, Action! is just ending, this is a great place to stop. If you’re near The Great Movie Ride, head towards the glass blocks. To the left of the Great Movie Ride and behind the Hyperion Theater (formerly the American Idol Experience Theater), down some steps, you’ll find a restroom hidden in plain sight among the theming.

There will probably be new restrooms opening up with Animal Kingdom’s expansion from just a day-time park to an all-day park, but right now there are only a few hidden restrooms in this park.

If you’re near Finding Nemo – The Musical theater, head up the walkway on the right side near the exit. Unless a show just let out, this is a great place to go.

Near the exit of Dinoland USA is another hidden restroom. Even though this is a busy area with Primeval Whirl and Dinosaur close by, this restroom has plenty of space to accommodate the crowds.

Many people never make it back to Rafiki’s Planet Watch, which is honestly a mistake (but that’s another article!), where there is a large and line-free lavatory inside the Conservation Station pavilion. Since the train ride to and from is a little long especially if you just missed a pick-up, you might want to stop here so you don’t get that uncomfortable urge on the bumpy train!

Do you think Disney World has enough restroom capacity?