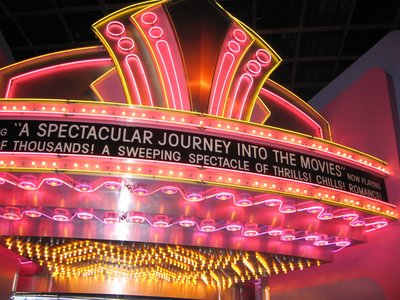 Can you imagine being able to ride through a movie, rather than merely watching it? You can do this on The Great Movie Ride at Disney, which is located within the Disney’s Hollywood Studios theme park. This attraction puts you in the middle of all of the action — it has the elements of a fun and action filled adventure! There’s a gangster scene, a ride car which looks like an old limousine, and plenty of live actors to keep the fun going.

Disney has re-created this ride to look like the outside of the famous landmark in Hollywood called Grauman’s Chinese Theater. Here, it’s simply called the Chinese Theater. A large structure which resembles the hat which Mickey Mouse wore as The Sorcerer’s Apprentice was built in front of the façade in 2001 and blocked the view of the Chinese Theater when looking down Hollywood Boulevard from the main park entrance.  Now, “The Hat” is the major focal point as you walk up Hollywood Boulevard from the entrance to the studios.  There’s usually a pin trading shop within its confines.

Inside the ride, scenes from major movies (with the exception of Universal Studios – the competition up the road in Orlando) are represented.

First, guest line up inside the lobby of this theater and can look at authentic props, costumes, and set pieces from different movies. You can even see the ruby red slippers from the Wizard Of Oz.

Inside a smaller theater before the ride starts there are continuous showings of trailers for movies featured during the ride. You preview famous scenes from Westerns, gangster films, musicals, and even space movies.

Guests enter a re-creation of a 1930s soundstage as they sit down inside of their open ride vehicles.

Two limousine-style open vehicles are linked together and each has a host who narrates the tour. There’s a big neon theater marquee at the start of the ride as well as a cyclorama depicting the old Hollywood Hills along, with the original Hollywoodland sign. You soon hear the famous “Hooray For Hollywood” song and you are off on your journey.

Musicals are up first as the ride starts up with amateur figures depicting various scenes from Footlight parade, Singin’ In The Rain, and Mary Poppins. Actual stars from these movies such as Gene Kelly, Julie Andrews, and Dick Van Dyke are depicted.

Guests on the tour are now taken through seedy back streets of 1930s Chicago. James Cagney gives us a scene from The Public Enemy. Two live actors depicting male and female gangsters now take part in the storyline. They become involved in a shootout with a car full of rival mobsters. One of the actors hijacks the tour vehicle, and chases away the tour guide. Using the vehicle as a getaway car, they take off through a tunnel.

Animatronic actors showcase Clint Eastwood and John Wayne in a couple of different typical scenes from their favorite Westerns. If the tour vehicle still has the live gangster driver, it rushes past a shootout between the town sheriff and the bank robber. If you’re visiting this attraction during the peak season, there are a few interchangeable scenes within it, involving different live actors.

That Creepy Alien From the Movies

Here, guests enter the interior of the spacecraft Nostromo, which is Sigourney Weaver’s spaceship from the movie Alien. A narrator talks about the alien still lurking around somewhere. A computer voice blares out the risk of imminent self-destruct of the surrounding area. Your vehicle speeds up, when the alien appears suddenly from overhead, blasting out amidst steam from both the wall and ceiling. An animatronic Ripley helps keep the alien away by using her flame thrower.

Indy & The Raiders of the Lost Ark

Suddenly, guests are taken to an ancient Egyptian temple which is alive with snakes. A narrator tells guests that they are within that movie, as animatronic actors struggle with the Ark of the Covenant. In the next room, visitors see a large altar with the Egyptian god Anubis beside it. Your tour hijacker sees a large jewel and tries to retrieve it. They receive an ominous warning about what happens to anyone who tries to grab hold of the gem. Of course, this all ends badly for the hijacker. Your original tour guide reappears and resumes their duties of driving your car.

That favorite movie genre, horror, is showcased in this area of the ride. Scary movies briefly come to life in the eerie burial chamber. Next, Tarzan swings by in the jungle as Jane rides an elephant. The next classic scene is from Casablanca and it has animatronic actors depicting Ingrid Bergman and Humphrey Bogart saying goodbye to each other with a mockup of a plane in the background. Guests transition to the next scenes with a clip depicting Mickey Mouse in the Disney movie Fantasia being projected on the wall.

The Wizard of Oz

The tour enters Munchkinland from The Wizard of Oz. Dorothy’s house has the Wicked Witch of the East pinned down! Usually, tour vehicles will stop here for a few moments. Munchkins, as performed by an animatronic actors, appear and sing. The Wicked Witch of the West suddenly shows up and does her thing (famously saying “I’ll get you, my pretty, and your little dog, too!”)   Your tour guide answers her question and then the witch disappears. Munchkins reappear and sing “We’re Off To See The Wizard” as your tour vehicle exits the movie set and goes down the yellow brick road. You’ll see all of the characters from the Wizard of Oz in front of the Emerald City as the tour vehicles enter a dark theater.

With vehicles at a stop, guests enjoy a 3 minute montage of classic movie clips. After this, the tour vehicles line up single file again and return to the 1930s soundstage from which they started out. Visitors exit and then move out into the Disney’s Hollywood Studios theme park.

A Memorable Ride Through The Movies

The Great Movie Ride is a must see attraction for all movie buffs.