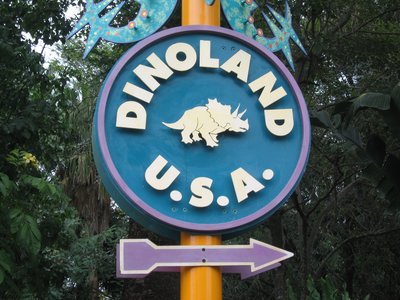 Animal Kingdom is full of fun surprises and attractions. One of the larger areas within the is Dinoland. The Animal Kingdom Dinoland area features numerous attractions, with something to interest just about every member of your family. After you spend some time in the Asia portion of the park, riding on the Kali River Rapids and enjoying the Maharajah Jungle Trek, make the short journey back in time to DinoLand.

There, you will find rides, educational activities such as a replica of an archaeological dig, and much more. This part of the park has lots to do and see, so be sure that you allow enough time to do everything that interests you.

Below are brief explanations of the attractions, rides, and programs located within DinoLand. Learn a bit about each, so that you will know which ones you want to visit.

Sure, you intended to vacation at Disney World Resort in Florida, so let’s just say that DINOSAUR is a bit of a side trip. You will travel back to prehistoric times and see what life may have been like when dinosaurs ruled the earth. While on this attraction, you will have a job to do: bring back a 3.5 ton dinosaur so that present day scientists can study it. Of course, you will have to deal with all of the other huge beasts that live in the forest, so your task will not be easy!

If you love Broadway shows then you will enjoy this 30 minute production of Finding Nemo: The Musical. Award winning song writers and talented actors are part of the team that brings this much loved movie to the stage. Guests of all ages will love this fun and peppy show. It is also a good chance for a little break as the show is performed in an air conditioned theater.

You will still be in Disney World, but you will feel like you are at a local carnival when you see the array of fun games. Win and you will take home a prize. Of course, you will have to pay a fee to play each of the games, but the chance a fun prize to win can be too much to resist!

The Boneyard is a great place for up and coming paleontologists to hone their skills. At the “dig site”, kids can work to uncover bones that are hidden beneath the sand. The xylophone bones give kids a chance to compose a tune and then they can head over the maze where they can burn off some energy while their parents take a load off while enjoying some of the shaded seating that is provided for them.

Animal Kingdom’s DinoLand is certainly lots of fun, but there are still plenty of ways to learn a thing or two during your visit. At the Kids Discovery Clubs, located at various locations throughout the park, kids will learn about bugs, dinosaurs, and other creatures. There are six Discovery Clubs. At each one, kids will be challenged to complete a mission such as embark on a scavenger hunt, reconstruct a dinosaur, or learn how a bug sees the world. For each successful mission, the child will receive a stamp. Collect all six stamps and earn they a special reward.

There are rides for visitors of all ages to enjoy while in DinoLand. The Triceratop Spin is perfect for the littlest visitors to enjoy. For a ride that will thrill older kids (at least 48 inches tall) and adults, try the Primeval Whirl – a mild roller coaster where the cars are circular and spin and spin as they make their way around the track.

Often when a dinosaur skeleton is discovered, only a small number of bones are present. It is rare for a dinosaur skeleton to be found nearly intact, but that is exactly what happened in South Dakota in 1990. It was then that a nearly complete Tyrannosaurus Rex skeleton was discovered. Named Sue, this beast now resides in a museum in Chicago, but you can see an exact replica during your visit to DinoLand. You will be able to get a sense of just how massive these creatures were during the time they walked on earth.

The amount of time that you will need to see everything in DinoLand depends on your family’s interests. For example, if your children want to complete all of the Kids Discovery Kids activities, then you would need to allot more time. If you just want to breeze through and take a peek at everything, you would need much less time.

If you want to grab a bite to eat while in DinoLand head to the Restaurantosaurus. Here you will find a variety of quick food items such as hamburgers, hot dogs and French fries. If you want a sit down meal, consider making the short trip from DinoLand to Africa where you can dine at the fabulous Tusker House restaurant. There, the food is infused with African flavors and will surely provide an unforgettable dining experience.

DinoLand, where learning meets fun, is a must-see part of any trip to the Animal Kingdom Park.