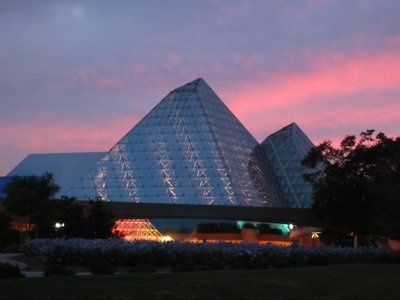 Many people know about the World Showcase Area of the Epcot Theme Park at Walt Disney World Resort in Orlando, Florida. It has Pavilions from eleven different countries including Japan, the U.S., the U.K., Germany, France, Mexico, and more. These Pavilions showcase the culture, cuisine and history of these nations through attractions, entertainment, dining, and shopping. If the Epcot Germany Pavilion serves beer and schnitzel, sells cuckoo clocks and entertains with a traditional German Oom-Pah band, one has to wonder exactly what the Epcot Imagination Pavilion serves, sells, and entertains with.

The Imagination! Pavilion at Disney’s Epcot Theme Park is located in the Future World Area of the park rather than the World Showcase Area. Unlike the World Showcase Pavilions which are all built to be small samples of real places, the Imagination! Pavilion acts as a journey into imagination – the fun places in your mind that create sparks of ingenuity, invention, and fun. It may seem difficult to structure imagination into a solid concept that can be seen, touched, and explored but Disney manages such concepts more successfully than one might expect.

The Imagination Pavilion features a large, brightly colored building with a glass pyramid on the top of it and another pyramid staggered behind that. There are also leaping fountains and other sculptures and structures in various shapes and colors. It looks a lot like a dreamscape particularly with Epcot’s iconic “golf ball” Spaceship Earth looming in the background. How appropriate that Spaceship Earth can be seen from the Imagination! Pavilion because their film attraction, Captain Eo, is set in a galaxy far, far away.

One way that Disney conjures the world of imagination into something tangible is through getting a little help from the pros. For example, Captain Eo is a journey into an interactive 3-D film world created by special effects gurus George Lucas and Francis Ford Coppola and featuring unforgettable musical performances by the late pop legend Michael Jackson who starred as the film’s title character.  While the film is a bit dated, it is still amazing.  At the time the movie was released it was rumored to be the most expensive film, on a cost per minute basis, ever created.

A 17-minute adventure through the cosmos sticks with you for a lot less time if you do not walk away having gained something besides the experience even if it is as exciting, unique and amazing as Captain Eo starring Michael Jackson. Just as in their feature films Disney wants you to walk away viewing the world as your imagination does, full of life lessons and incredible events. Disney always seeks to contribute a positive message, something it does with aplomb.

One of the most exciting things about this film which is often given the loving moniker Captain Eo Tribute, is its return to the Disney attractions list after being replaced by the 3-D interactive “Honey, I Shrunk the Audience!” from 1994 to 2010. The decision to return the film Captain Eo  occurred after the passing of super star Michael Jackson and has been released in its original theater after remastering. The film now looks and sounds better than ever. Quite a few visitors still remember Magic Journeys, the first ever 3-D interactive film shown in the Magic Eye theater, replaced by Captain Eo in 1986. Magic Journeys has since been retired and “Honey, I Shrunk the Audience!” is slated to return to the Magic Eye Theaters at Imagination! Pavilion sometime in the future.

You are now convinced Disney can bring imagination to life.  It is, after all, what they are famed for in all their feature films (especially the animated ones).  Disney know how to take you into the imagination of someone else. But how does the Disney Imagination! Pavilion help you journey into your own imagination? Well that would start at the Journey Into Imagination with Figment attraction.

This journey into imagination is half ride-based attraction, half interactive play area, and all fun. It starts with the audience following the scientist Dr. Nigel Channing as he leads a series of experiments on the senses to prove that taste, touch, sight, smell and sound can be used to control one’s imagination. Fortunately for the audience Dr. Channing’s pet dragon Figment takes over the tour, making a mess of his experiments and ultimately proving that imagination does not need to be controlled but rather set free.

This tour is full of sensory stimulation and songs making it fun and memorable for guests of all ages. It also segues seamlessly into Disney’s ImageWorks, a fantastic experience that enforces the lesson of the day and helps unleash your imagination.

ImageWorks is an interactive, creative play area for guests to explore all of the five senses that Dr. Nigel Channing mentioned – but in the freer way that Figment revealed. Guests can wave and wiggle their body parts to conduct an orchestra of strange sounds, play with state-of-the-art video cameras and lighting equipment to make a super slow motion video, or take a photo of themselves with the world’s largest digital camera.

This “Imagination Lab” is constantly creating new ways to bring imagination to life, which is why ImageWorks was closed during the renovation/re-creation of the “Journey Into Imagination” Tour. This new version of the Imagination! Pavilion debuted in 1999 with the iconic glass pyramids still intact.

Just like imagination, Walt Disney World Resort is growing and changing endlessly. Adding and substituting exploration tools in ImageWorks, the alterations in the “Journey Into Imagination with Figment” tour and rotating the 3-D interactive films helps keep the Imagination! Pavilion consistently inspiring.