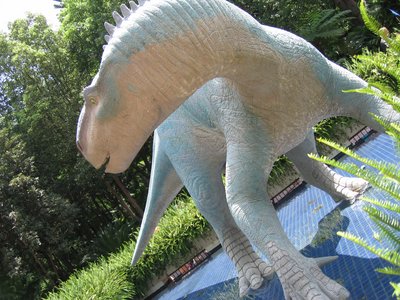 Every child goes through “that phase.” You know the one – where Dinosaurs rule all their waking and sleeping thoughts. Whether the kid is a boy or girl, whether he or she is inspired by the film Jurassic Park or inspired by the animated film The Land Before Time; at some point, every child loves dinosaurs more than anything else in the entire world.

Speculations regarding children’s wonderment with these giant creatures from the ancient past have come up with only theories – Is it because only the giant stomping feet of a dinosaur could cause the same level of destruction that the raw energy and power of a small child does? Could it be that dinosaurs exist so vividly in the collective Imagination of children, but are something they will never see in real life – like a unicorn or a dragon? This theory, unlike the first one, has the potential to be disproven. Children can see dinosaurs in real life. Just as children can go the Walt Disney World Resort’s Animal Kingdom Theme Park to see wild animals in safari settings that they have only seen in zoos, they can see Dinosaurs at the Dinosaur Animal Kingdom.

While Dinoland U.S.A. is part of an area in Disney’s Animal Kingdom theme park, rather than a full theme park on its own, it contains a host of Dino-themed attractions, entertainment, shopping and even a restaurant – Restaurantosaurus. If you kid is in that phase – the Dinosaur phase, he or she will find that DinoLand U.S.A. lives up to Walt Disney World Resort’s reputation as being the most magical place on earth. So just what does Walt Disney World, the world famous theme park resort in Orlando, Florida have to offer your dinosaur-obsessed kid?

Two opposite groups compete for control of the DinoLand, U.S.A. crowds – the entertainment history behind these two groups makes for a lot of the Area’s dynamic fun. The first group is the Dino Institute, which made a permanent dig site in DinoLand, U.S.A. because of the abundance of fossils found there previously. They are determined to reach guests in a fun and educational way, teaching them something about Dinosaurs at the same time as entertaining them.

In the Cretaceous Trail you can stroll through a thick jungle, imitating the prehistoric forests that would have been inhabited by your child’s favorite extinct behemoth. You will see plant and animal species that existed at the same time as the dinosaurs – over 65 million years ago – that are still alive and well. Follow the meandering trails through fossil dig sites and even to a life-sized Pachycephalosaurus, or a bone headed dinosaur.

The Cretaceous Trail will lead you to the Boneyard, an interactive exploratory playground area for kids. With a maze, slides, rock climbing, and even a sand pit where kids can search for fossils, this attraction exemplifies excitement, natural curiousity and discovery as kids can pretend to be paleontologists in a safe and fun setting.

This life-size replica of the most complete Tyrannosaurus Rex skeleton ever found stands 13-feet high at the hip, and from nose tip to tail tip is 40 feet long. To put this into perspective for you, that’s as long as a 4-story building is high! The advantage to seeing the replica Dino-Sue here, as opposed to her real resting place, the Chicago Field Museum, is that you can take as many pictures as your heart desires, flash and all!

Perhaps the coolest thing that you will see in the DinoLand, U.S.A. Area of the Animal Kingdom Theme Park at Walt Disney World Resort is simply called, Dinosaur. It most closely resembles the Jurassic Park Ride at Universal Studios, in that guests ride in a vehicle and encounter giant animatronic Dinosaurs, but has a different plot, not tied into that of a pre-existing film. Strangely enough, there is a film of the same name as the “Dinosaur,” which was ride shot in the same year as the ride premiered. Even stranger, there are no similarities between the two, besides the prominence of two dinosaurs – the Iguanodon and Carnotaurus.

This time traveling ride adventure takes you up close and personal with the dinosaurs of your wildest dreams, and your worst nightmares. This is a ride you have to see to believe, so don’t miss it under any circumstances. Even if the lines are long, you can use you Disney Fastpass to reserve a spot in line. If you or your fellow travelers have any special riding needs, captions, wheelchair access, anything, you can see a cast member for additional information about having those needs met. This goes for every ride in DinoLand, U.S.A., not just Dinosaur.

Fossil Fun and Games are a series of carnival-style and arcade games set up near the Triceratops Spin and the Primeval Whirl. These games add a great deal of authenticity to the carnival-style nature of the experience provided by Chester and Hester’s Dino Rama. These games are a perfect opportunity to show those dinosaurs whose boss in games like the Dino-Whamma mallet game, the Bronto-Score basketball game or the Fossil Fueler water-gun game.

This fun and silly ride allows you to hop into a 4-person car shaped like a cartoon Triceratops. Controls in the front and back allow guests to move their car up and down, back and forth, to enhance the pre-existing motion of the ride. The Triceratops cars move around a giant top, as comets and other dinosaurs pop up around them. A secret dinosaur is featured in the ride, popping out of the center of the top during the duration of the spin.

How on Earth Will You Afford this Trip?

Now, a trip to Walt Disney World Resort is certainly not as expensive as trying to fund the invention of time travel to go back on a Dinosaur safari adventure, which is the closest experience that you could have to a visit to DinoLand U.S.A., but that doesn’t make it cheap. How on earth will you afford this trip, which your child, of course, has threatened to hold his or her breath until this trip happens? Not wanting your child to turn blue in the face…

The answer is simple – Walt Disney World Vacation Packages. Just as their technology enables them to let your child experience Dinos first hand, it allows your budget to experience value in the same proximity. The Magic Your Way Vacation Package, the most convenient and flexible package designed to fit any and every budget, lets you bundle the costs of your Disney dining, your stay at one of Disney’s luxury resort hotels, and your admission to their world famous theme parks. This package, on average, saves you 30% – 50%, making a Disney vacation more affordable than you could have ever imagined.

So what are you waiting for? Call a Disney authorized travel agent today, and let them help you get the most bang for your buck, so that you and your child can explore DinoLand, U.S.A. together. It is a family vacation experience that your kid will remember and treasure for the rest of his or her life. Truly, for a child in the Dinosaur phase, nothing could be cooler than the opportunity to wander the trails of a Dinosaur forest, search the ground for fossils, and go on exciting dinosaur-themed rides. Who knows, you may even find your inner child regressing to “that phase,” feeling just as giddy and excited to be exploring DinoLand, U.S.A. as your Dino-obsessed child.