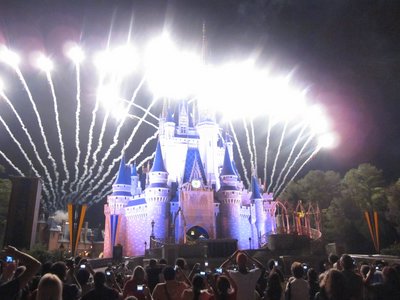 One of the downsides of vacationing at Walt Disney World Resort in Orlando, Florida is the crowds of people, right? Ask anyone, and they will tell you. You have to wait in line after line, eat with people, ride with people, and stay in resort hotels with, you guessed it, people. You vacation at Walt Disney World Resort with your family and friends for the same reason you vacation elsewhere with them – to spend time with your family and friends, right? What are all these other people doing butting in on your family vacation?

You may be surprised to learn that not everyone feels this way. While, yes, it is true that no one enjoys waiting in line, the crowds at Disney World are part of what makes Disney the most magical place on earth.

There are actually some big positives to the big crowds at Walt Disney World Resort. Besides, though you can plan to visit Disney World when there are less people there, you will never see a Disney without any crowds at all. You should work on seeing the positives to the crowds, as well as trying to avoid them at all costs, because you’ll never accomplish that successfully.

Crowds are a part of the experience at Disney World.

The three reasons that you want to visit Disney World alongside crowds are: sharing is caring, people safaris, and supply and demand. So, look at each of these reasons a bit more in depth, and you may discover that you don’t think crowds are so bad after all.

First of all, you have “sharing is caring.” This is to say that the magic of Walt Disney World Resort in Orlando, Florida is something that people create. It wouldn’t be the most magical place on earth with no people in it. In fact, it would just feel empty, and a bit creepy.

The Disney Magic comes not only from a child’s smile as Mickey waves at him from a parade, but also from another guest seeing that child smile, and smiling in turn. Disney magic comes from riding the ‘It’s A Small World‘ ride with other Disney guests, uniting in your enjoyment of singing animatronics, and realizing that the song, which is rapidly becoming lodged in your brain, is right – it is a small world full of so many people who aren’t so different from each other as they may think. Disney World and its Magic are an experience that is meant to be shared between people and perpetuated as it is shared – the more the people, the more the magic.

The second reason you should not be so hasty to hate on crowds is because Walt Disney World is one of the best places in the world for people watching. There are so many people in fact, that you can go on full-fledged people safaris. You will see all sorts of folks, from families that will warm your heart, to couples who are so sweet they’ll give you cavities, to mullets, to beer-guts, to people dressed from head to toe in Mickey Mouse gear to Goths. In fact, there are a few days a year when thousands of Goths congregate at Disney to frolic like children and enjoy the finer things, like funnel cakes. Who wouldn’t wait in line a few extra minutes to see that?

A great way to take advantage of the crowds and stave off boredom while waiting in line is a sort of people collecting game. You and the other members of your vacation party each pick a distinguishing but off-the-wall physical feature, like Disney tattoos, people who resemble Disney characters, or toupees, and so on. Each of you will keep an eye out for your characteristic and point it out to each other as you see it. Keep track of how many people you spot with the characteristic you chose and whoever spotted the most of theirs wins!

Disney is not above the principles of economics – or maybe they are. They at least follow the rule of supply and demand. If the demand is higher, i.e. there are more crowds; it is because there is more supply, i.e. special events and attractions that cannot be seen at other points in the year. For example, the Fourth of July, Christmas, and New Years are some of the most crowded times at Walt Disney World Resort.

Beyond the fact that people have vacation days during these periods, this has a great deal to do with how spectacular and wonderful the fireworks show on the Fourth of July is, how festive the Christmas Parade is, and how especially breath-taking the Illuminations: Reflections of Earth show is on New Years Eve. These spectacles are unrivaled in their beauty and ingenuity. Many feel it is worth braving the crowds to be a part of these events.

In addition, the park hours are the longest during the busiest times of the year. In addition to the holidays mentioned above, Spring Break – which, due to differences in school calendars actually ranges from mid-March all the way through April, Memorial Day Weekend, and June through early August are all crowded, but special, times to visit Walt Disney World Resort in Orlando, Florida.

So Crowds Aren’t So Bad After All

Now that you’re warming up to the idea of crowds, for less-crowded days try visiting Walt Disney World in Late August through September, most of November, avoiding Thanksgiving, and even up until about a week before Christmas – though it gets more crowded the closer to Christmas you get. Visiting when it is less busy does have its drawbacks. For example, you have to be careful visiting during the winter months, as the weather at Disney World can get quite chilly at night in Central Florida – down to 30 degrees on a truly chilly night. In addition, ensuring you book a vacation package that includes a Disney Resort Hotel that give you access to Extra Magic Hours is a must or you might find yourself wanting more time in the parks – especially early and very late in the day.

If you want to get downright scientific about it, there are certain days of the week that certain theme parks within Walt Disney World Resort are less crowded, but honestly, crowds are like rain showers. You are unlikely to visit Walt Disney World Resort and successfully avoid them altogether. You are better to make your peace with your fellow Disney crowd members, and even enjoy their company. The most magical place on earth would not be so magical at all without them.