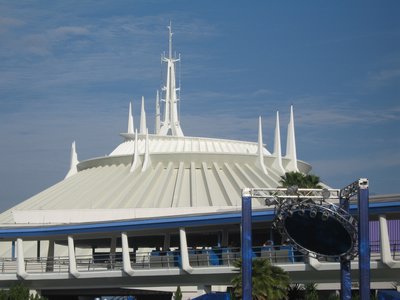 With a twisty track that sends its rocket shaped vehicles hurtling through darkness broken only by twinkling stars, Space Mountain combines a truly thrilling ride with the detailed theming that sets Disney attractions apart.

Magic Kingdom was designed to appeal primarily to children and families, but from the beginning the park was also hugely popular with teens and young adults. Hoping to cement the park’s appeal with this demographic, Disney Imagineers planned to add several thrill rides and roller coasters to different parts of Magic Kingdom.

They originally envisioned replicating the Matterhorn Bobsleds from California’s Disneyland Park, which was the very first thrill ride to appear at any of the Magic Kingdom style parks. However, they soon discovered that there wasn’t enough room at Magic Kingdom’s Fantasyland for that towering attraction. The situation demanded a fresh idea, and Space Mountain was the result.

The attraction is one of only a handful that originated at the Florida park before moving to other Disney parks. Thanks to its overwhelming popularity, a Space Mountain attraction was added to Tomorrowland at Disneyland only two years after the ride debuted at Magic Kingdom. Later, Space Mountain was added to each of the other Magic Kingdom style theme parks around the world.

There are only three true thrill rides at Magic Kingdom, and Space Mountain is the most famous and most popular of the three (the other two are Frontierland’s Big Thunder Mountain Railroad and Splash Mountain.) The domed exterior of the ride is the centerpiece of Tomorrowland and perhaps only Cinderella Castle is a more iconic feature of the Magic Kingdom landscape.

In the best Disney style, Space Mountain does its best to keep visitors entertained and immersed in a theme before, during, and after the ride itself. Lines for the ride can be long, but once the snaking queue reaches the interior of the building, you find yourself waiting in a kind of futuristic airport gangway. Safety videos even play overhead as you pass, explaining boarding procedures and safety precautions to ensure that you have a safe space flight.

Once riders reach the Space Port, which glows with deep blue lighting, they will climb aboard a car and set off on one of two parallel tracks. These tracks, named the Alpha and the Omega, feature nearly identical drops, twists and turns, so visitors can be assured of the same thrilling experience each time they ride. These rocket shaped cars then climb to the summit of the 180-foot mountain in preparation for blast off into the darkness of space.

Of course, instead of shooting upwards into the atmosphere, the Space Mountain rockets plummet downwards on a track shrouded in thick darkness. This darkness is the key to the thrill of Space Mountain. At around 28 miles per hour, the attraction is not exceptionally fast as roller coasters go. Riders are secured with a simple lap bar, and the ride doesn’t have any upside down loops. However, in darkness that conceals the turns and drops – in fact, conceals the entire structure of the track – the ride takes on a feeling of unpredictability. Surrounded by stars and a soundtrack that includes the sounds of asteroids whizzing past, you can really pretend you are on board a rocket.

As riders exit Space Mountain and return to Tomorrowland, they ride a moving walkway past futuristic scenes. Guests can enjoy images of what homes and workplaces might look like in future years, and even see themselves projected live on television monitors. In the world of Disney, it’s simply unacceptable that guests should be forced to take a long trek with nothing to entertain them on the journey.

Space Mountain is easily one of the most popular rides at Magic Kingdom, and often features some of the longest wait times to be found anywhere at the Disney World theme parks. Fortunately for visitors in the hot summer months, much of the line is indoors, although summer is also the busiest time of year and riders should be prepared to spend some time standing in the sun.

To help make wait times more manageable, Space Mountain is one of a select number of rides at Disney World that offer a FastPass. Using their park entry pass, park visitors can get a pass that allows them to return at a specific time during the day and skip the majority of the regular line. The FastPass stations display the return times throughout the day to help visitors plan their FastPass strategy.

However, in order for the FastPass system to work only a limited number of the passes are available to visitors on a given day. Space Mountain frequently runs out of FastPass tickets before the end of the day, so visitors who want to use the system should be sure to head to the ride early in order to secure their pass. The standard line also tends to be shorter during the early hours of the day, so riders who head to Space Mountain right away may not need to use a FastPass, or can ride right away after securing a FastPass for a second ride later in the day.

Who Can Ride Space Mountain?

Due to the thrilling nature of the ride, Space Mountain requires guests to be at least 44 inches tall in order to ride. Guests under the age of 7 must be accompanied by a guest who is at least 14. Since many adults and teens visit Magic Kingdom in the company of small children, Space Mountain allows guests to use their Rider Swap system. With this system, two adults or teens may wait in line with a child who does not meet the height requirement. When they reach the boarding area, one adult may ride while the other waits with the child, and then the second adult may ride without having to re-enter the line.