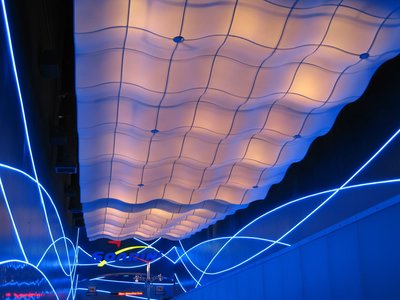 When you enter the Epcot Soarin’ hangar on the bottom level of the Living with the Land pavalion at the Epcot theme park, prepare for a multi-sensory ride over glorious California – like none you’ve experienced before.  You’ll find yourself hang gliding, feet dangling over the edge of your seat, as you take flight and enjoy the scene, one after another, playing out on the huge screen in front of you.

This attraction, suitable for teens, kids and adults, is one of the most popular rides at Epcot and Disney.  It is one of first thing your family should do as you enter Epcot.  After you end the park, swerve  right and go immediately over to the lower level of The Land pavilion.  There you can get a FastPass for Soarin’, which will save you from standing in a long line.  These FastPasses usually run out within hours, so get there early.

Some Interesting Details About Soarin’

This attraction was first put in to the California Adventure Park near Disneyland in Anaheim California.  If you could see the ride with the lights up, you’d be looking at a giant wheel with racks of people, feet dangling down in rows, and facing a huge IMAX movie screen.  Riders are taken forty feet into the air and this adds to the illusion of actual flight.  The movie screen wraps 180 degrees around the hang glider passengers, so it’s an immersive experience.

Many special cameras, helicopters, and airplanes captured amazingly beautiful shots of the Golden Gate Bridge, San Francisco, Redwood Creek, Monterey, Napa Valley, Lake Tahoe, Camarillo, Yosemite National Park, San Diego and Malibu, Los Angeles, and Anaza-Borrego Desert State Park.  The feeling is so real that you are actually experiencing flight that those people who suffer from severe motion sickness may want to sit it out.

As you enjoy this thrilling Epcot Soarin’ ride, you’ll glide over a PGA tournament, a snowboarding and skiing exhibition, and cowboys on horseback racing in the wind of the wilderness. Your feet are dangling, there’s a breeze in your hair, and you can smell evergreens, oranges, and the salty sea.  The finale has fireworks exploding over Disneyland’s Sleeping Beauty Castle in awe inspiring color.

Disney Policies Regarding This Attraction

A Few Tips From a Thrilled Rider

Outside of The Land

Epcot is full of wonderful Disney adventures.  After you have sampled Soarin’, head next door to The Seas.  This can start with a Finding Nemo ride or you may also go straight into one of the largest salt water aquarium exhibits in the world.  They have manatees, sharks, dolphins, rays, sea turtles, and many other varieties of marine life, in several different aquarium spaces.  Guests may walk along ramps and study the animals for as long as they wish.  If you eat lunch or dinner outside and attached to The Seas, you can see that one whole wall of the Coral Reef restaurant is made up of part of this gigantic aquarium.  You can literally eat with the fishes!

Test Track and the Universe Of Energy

If you cross over to the other to the opposite side of Future World in this part of Epcot, you’ll find two more exciting pavilions – Test Track and the Universe of Energy.

As you are waiting to drop into one of Test Track’s speedy little cars you’ll see lots of demonstrations about how engineers and others test our vehicles of today, and tomorrow.  Get onboard the ride vehicles and you will find yourself performing a few tests for the engineers.  Before you know it you will be shooting out and flying around an actual speedway track which circles the buildings.  Take a look at your hair after that!  As you exit the ride you can see a lot of prototype vehicles and meet up with your group.

Close by at the Universe of Energy, Alex Trebeck, Jamie Leigh Curtis, Ellen Degeneres, and Bill Nye the Science Guy will take you on a tour of energy from the past.  There’s a movie which guides you through it, then an actual animatronic Dinosaur experience.  This is one active theatre! Large blocks of seats move on a track as you journey through the past – you will see dinosaurs fight and learn how energy was made.  Back in the present, your seats come to rest and Ellen completes her Jeopardy game, armed with her recently-learned facts about the Universe of Energy.  This ride is for all ages although there are loud dinosaur noises and a patch of darkness, as well as a few explosive special effects.

Visiting The Land and Soarin’ will get you a great introduction to the style of Disney entertainment and education available and Epcot, and will surely be a highlight of your visit.