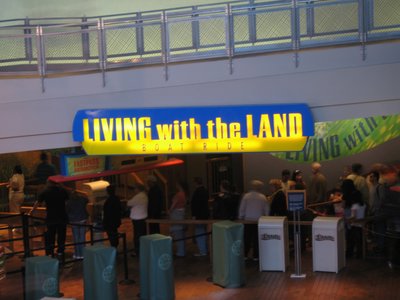 Epcot Living With The Land

Living with the Land is an attraction at the Land Pavilion in Epcot’s Future World.  It  celebrates innovations in the field of agriculture. A boat ride that takes visitors on a winding journey, Living with the Land seeks to amaze and inspire visitors, as well as entertain them, during the course of the 14 minute ride.

The attraction combines elements of a dark ride through various scenes created by the Disney Imagineers with a floating tour through a series of functioning green houses. Living with the Land educates guests about agriculture around the globe before giving them a behind the scenes look at farming on the Disney World property itself.

The ride begins in the middle of a thunderstorm, as the boats sail into a deciduous (leaf-shedding) forest under a barrage of rain, wind, and lightening. The ride then travels through a series of major habitats, or biomes, such as a desert, an open prairie, and a tropical rainforest. While many people naturally associate American prairie lands with agriculture, Living with the Land illustrates the realities of agriculture in such extreme environments as the desert, and the impact human beings have had on biomes in their efforts to successfully farm the harshest of habitats. The opening storm provides contrast to the scenes of human impact, demonstrating how the seemingly destructive forces of nature play a part of the natural cycles.

To truly bring these varying habitats to life, the Disney Imagineers employ a variety of audio-animatronic figures, wind, heat, fog, sounds, and lighting effects. Riders experience the heavy humidity of the tropical rainforest, the dry and bright heat of the desert, and the high winds of the prairie as they float through the different scenes.

Following the dramatic scenes of the dark ride section, Living with the Land transitions into the “Living Laboratory” section to take a look at five experimental greenhouses. This part of the ride gives visitors insight into cutting-edge farming techniques and the forms that the future of farming may take.

All of the plants in the different greenhouses are grown with a use of hydroponics, which is a method that feeds plants using mineral-enriched water rather than soil. And the plants on display are not simply an intellectual experiment for the entertainment of visitors – these greenhouses provide produce and fish to all of the restaurants at the Epcot theme park.

The “Living Laboratory” tour has a pre-recorded narration by Mike Brassell, whose voice can also be heard narrating the Tomorrowland Transit Authority. As the specific plants grown in each greenhouse change, the recording is updated to provide the most accurate information to Living with the Land riders.

The Tropics Greenhouse grows a variety of tasty fruits and other produce items that are native to the world’s tropical zones. Visitors will likely recognize pineapples, bananas, and papayas, but they may be less familiar with peach palms, dragonfruits, java apples, and jackfruits. The greenhouse grows cleome, vanilla, and cacao (a key ingredient in chocolate!)

The Aquacell produces a variety of farmed fish through a subset of agriculture called aquaculture. It features low and high density tanks with fish, crustacean, and even reptilian creatures. Among the fish that might appear on your plate at the Coral Reef Restaurant are tilapia, catfish, bass, sturgeon, and shrimp. The tanks also display a few members of Florida’s most famous species – the American Alligator.

Temperate zones, characterized by mild average temperatures, are natural places for farming, and many crops grow happily in this environment. The Temperate Greenhouse features a number of items specially grown to be exceptionally large, such as Atlantic Giant Pumpkins and melons. These giant crops give visitors plenty to admire as they sail past.

The focus of the Strong Greenhouse is vertical growing and other techniques that maximize the density of crops as they grow. Producing high density crops helps growers to achieve a large harvest with minimal space, which is increasingly important as land – good agricultural land in particular – is increasingly difficult to obtain around the world. A successful example of high density vertical growing is the Living with the Land tomato tree, which earned a place in the Guinness World Records for its productivity.

One of the more entertaining features of the String Greenhouse is the cucumbers and pumpkins that grow into the shape of Mickey Mouse thanks to special molds. After seeing them growing and shaping in the greenhouse, guests can enjoy these items on their dinner or lunch plate by visiting The Garden Grill or Sunshine Seasons restaurants in the Land Pavilion.

The Creative Greenhouse is the final stop on the Living with the Land tour, and this location features some truly cutting-edge growing techniques that seem like science fiction but may very well be the future of agriculture.

One such technique on display is aeroponics, which takes the concept of soil-less crops one step further. Unlike hydroponics, which uses water as a growing medium, aeroponics eliminates growing mediums altogether by spraying necessary nutrients directly onto plant roots. The Creative Greenhouse also features hydroponic growing units developed by NASA that will allow astronauts to grow fresh produce during extended space voyages.

A very popular attraction that is part of The Land is Soarin’ – where you can experience the sights, feelings, and even smells of hang gliding over many famous and beautiful scenes of California.

The Living with the Land ride can be busy during peak hours, and the FASTPASS system is available to help some guests avoid a lengthy wait time. With an Epcot entry pass, guests can receive a ticket to return at a specific time and skip the majority of the line.

Who Will Enjoy Living with the Land?

Living with the Land has some elements that are pure entertainment, but much of the ride is packed with information. While children are likely to enjoy the excitement and detail of the dark ride portion, they may not be as interested in the information about advanced agricultural techniques. However, the greenhouse section of the ride does have some treats such as the oversized produce and Mickey shaped pumpkins and cucumbers that kids will enjoy if they are willing to sit through the other elements of the tour.