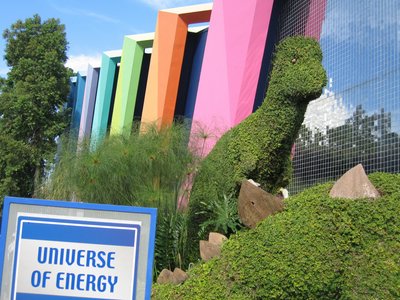 Parents with children sometimes wonder if a vacation should be all about fun, or if there should be some educational value as well. While “education” might not be the first thing that comes to mind when you think of a Disney World Resort vacation, the fact is that many of the exhibits contain plenty of educational content. Because the material is presented in such a fun and exciting way, the children and adults that hear it will be more likely to remember it.

Education And Fun Come Together

Some of the best educational spots in Disney World Resort can be found in Epcot. Epcot is made up of a series of pavilions representing different countries. It is also home to a pavilion called the Epcot Universe of Energy. Universe of Energy is located in the Future World section of Epcot.  Future World is full of exciting attractions. When you visit, make sure to take the time to see the Universe of Energy pavilion.   This is a “traveling theater” attraction, meaning that there is some gentle movement. Still, this ride is appropriate for most guests.

The Universe of Energy pavilion first opened inside Future World in 1982.  While the attraction that could be found here from 1982 until mid-1996 is similar to what is there now, it underwent some upgrades and changes for the grand re-opening that took place in September of 1996.

The focus of the exhibit was always to teach guests about where energy comes from, as well as how it is used today in its various forms. Noting that the original exhibit was becoming a bit dated, Disney World designers decided that it was time for an upgrade to this attraction. Wanting to retain the original feel and content themes, they set about finding ways to ramp up the fun and excitement of the exhibit.

Bring In The Celebrities

One way that this was accomplished was by hiring celebrities to take part in the exhibit. Today, the single attraction located inside Epcot’s Universe of Energy is called Ellen’s Energy Adventure and it stars Ellen DeGeneres and Bill Nye the Science Guy. There are also brief appearances from another celebrity. Namely the celebrity is Michael Richards who pops in as a caveman.

When the show first begins, you see Ellen DeGeneres dreaming about being on her favorite TV game show – Jeopardy with Alex Trebek. When she realizes that all of the questions are about energy, she knows that she has no chance to win, because she knows nothing about this topic.

She asks her neighbor, who just happens to be Bill Nye the Science Guy, for a little help learning about energy. He happily complies and the two of them are off on an adventure that takes them – and you – back to the time when Dinosaurs roamed the earth. You will learn how the fuel that we use today was created starting eons ago. All of this learning takes place as you travel through animatronic dinosaurs and try to avoid being caught up in lava flowing from a volcano.

You will hear the Big Bang theory that some hypothesize created the earth and learn about the creation of fossil fuels. This combination of learning and fun makes this a great choice for every member of the family. Disney is always looking for ways to bring new technology to its parks. The Universe of Energy has been powered in part by solar panels since solar panels were a fairly new idea.

As with all Disney World Resort attractions, it is not uncommon for there to be a long line to see Ellen’s Energy Adventure. You can cut down on your wait time by using the FASTPASS service. FASTPASS is a free service that allows guests to take a ticket and then come back to the attraction at an appointed time. While there may still be a short wait, it will be a much shorter wait time than if you did not use FASTPASS.

For Guests With Special Needs

Guests who are in wheelchairs will not need to transition, but those in scooters will have to move to a wheelchair.  This is a great attraction for the whole family. There are no age or height limitations and the attraction is educational as well as fun.

Some little-known facts about Epcot and The Universe of Energy

Beyond The Universe of Energy

If you get hungry, you can head over to the nearby pavilion called The Seas with Nemo & Friends. Here you will find the Coral Reef Restaurant in which you can dine on fabulous seafood and other entrees while viewing the creatures that live inside the six million gallon Coral Reef tank. There are kid-friendly menu options offered as well.