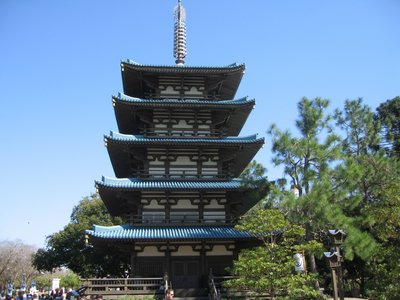 Epcot’s Japan Pavilion is one of eleven areas within the Epcot’s World Showcase that celebrate the culture of different countries around the globe. The pavilion features a pagoda and a castle, and the remainder of the area is decorated with indigenous Japanese flora and elements of a traditional Japanese garden. Visitors can appreciate the distinctive elements of Japanese architecture, experience Japanese music and cuisine, and see displays of Japanese art.

At the front of the Epcot Japan Pavilion, stretching out into the lake, is a beautiful torii gate. Torii gates are traditional Japanese entryways that usually decorate the entrance to a Shinto shrines, and may also be seen at Buddhist temples.

Beyond the torii gate at the head of the Japan Pavilion courtyard is a blue-roofed Japanese Pagoda with five tiers. Pagodas are towers with multiple eves that exist throughout Asia from Nepal to the Koreas, and often serve a religious function. The pagoda at Japan Pavilion is modeled after a Horyuji temple from the seventh century. It is surrounded by gardens featuring native Japanese plants such as bamboo, monkey puzzle, and Japanese maples. Bridges arch cross small streams and ponds in which koi fish swim beneath floating water lilies, and paths are lined with traditional Japanese rock gardens.

At the far end of Japan Pavilion’s open courtyard is beautiful White Heron Castle, a Japanese castle surrounded by a moat that was inspired by the 17th century fortress overlooking the city of Himeji in Japan. The tall tower of this castle can be seen from all around the World Showcase, even on the far side of the lake. Visitors enter the castle through a gate to visit the Bijutsu-kan gallery. This gallery features rotating exhibits dedicated to various forms of ancient and modern Japanese art such as photography, anesaiku (the art of shaping brown rice candy into mythical animal shapes), and origami (the Japanese art of folding paper).

Several times each day, the taiko drumming group Matsuriza can be seen performing on the main stage at the base of the pagoda. Taiko is Japanese for “great drum”, and the type of drums used in taiko performances are Chinese in origin and were first brought to Japan around 500 BC. Taiko drums were used to motivate troops of soldiers in feudal Japan, and were also used in court performances. Modern taiko drumming, in which and ensemble of drummers perform together, originated in the 1950s. The Matsuriza percussion troop has been around since 1998, have performed both traditional and original taiko pieces around the world. Their 15-minute performance is now one of the leading attractions at Japan Pavilion, and a must-see for visitors to the World Showcase.

The Japanese Pavilion features some of the best shopping of anywhere in the World Showcase. Inside the White Heron Castle, in an area that replicates the ceremonial and coronation halls of Japan’s Imperial Palace, visitors will find the Mitsukoshi department store. Mitsukoshi was founded in Japan in 1673 to sell kimonos, and has now grown into an international department store chain. Visitors can shop for traditional souvenirs that reflect elements of Japan’s ancient history, or for items that spring from Japan’s modern popular culture.

Some of the more traditional souvenirs found at Mitsukoshi are bonsai trees, chop sticks, Japanese lanterns and folding fans, as well an incense. The store also carries calligraphy brushes, Iwach Wind Bells, Japanese tea kettles, and traditional Japanese clothing and footwear. Souvenirs reflecting modern Japanese pop culture include Anime trading cards, Hello Kitty gear of all descriptions, tamagotchis, and Kingdom Hearts action figures. Visitors should also be sure to check out the Mikimoto counter, with its impressive selection of pearl jewelry and individual pearls. At the back of the department store, be sure to visit the sake tasting bar, where you can sample different sakes before purchasing your favorite along with a sake serving set.

The Japan Pavilion is home to several different restaurants, where visitors can enjoy a quick bite or enjoy a formal sit-down-dining experience. These Disney restaurants are sponsored by Mitsukoshi, and are located above the department store in the White Heron Palace. Teppan Edo and Tokyo Dining offer formal meals in an elegant setting, while the Katsura Grill offers quick service Japanese food.

Teppan Edo serves traditional Japanese teppan yaki cuisine – a style of food preparation in which items are cooked on a large iron grill. In Japab, teppan yaki cooking has become as much an art form and means of expression as a cooking style, and restaurants frequently arrange their grills so that patrons are able to watch the chefs at work. At Teppan Edo, counters with seating for eight form a ‘C’ around the large grill, where chefs do all the work of chopping, preparing, and cooking the meals in front of the restaurant guests. Stir-fry fish, meat, and vegetables comprise the majority of the dishes, accompanied by rice and steamed noodles. Sushi is also available an as appetizer.

Tokyo Dining offers hungry visitors a more traditional dining experience in a sleek and modern setting. This restaurant serves traditional Japanese cuisine with an emphasis on sushi and sashimi – a style of Japanese food that now enjoys huge popularity in the United States. Tokyo Dining also offers tempura and other grilled items for those who are not fans of sushi’s distinctive flavor and texture. Cordial Japanese cast members modeling the formal hospitality and politeness that characterizes Japanese society contribute to the quality of this lovely restaurant.

The quick service Katsura Grill offers visitors the option of eating outdoors in lovely gardens modeled after the strolling gardens of Katsura Imperial Village in Kyoto, Japan. This restaurant also serves traditional Japanese food such as sushi and teriyaki, and is a great option for guests looking to experience authentic cuisine at a fraction of the time and cost of the two formal restaurants.