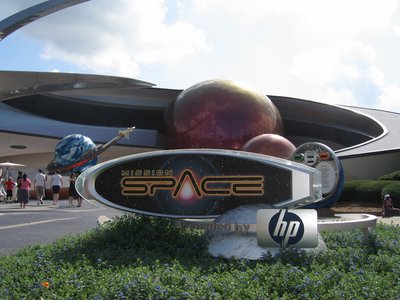 At the Epcot theme park in Walt Disney World the Mission Space ride is a superb motion simulator located in Future World.  It will give you the real feeling of actually blasting off into space while keeping your feet (after you exit the ride) firmly on mother earth.

Adults, big kids, and teens will all find this an exciting and thrilling ride. You can experience what an astronaut might feel during an actual flight to Mars. Each person in the module has a task to perform during the flight — and this may include navigating around nebulae and dodging meteors.

Two Versions of the Same Ride

This is an attraction where there are extreme G forces exerted.  The ride is actually a huge centrifuge which spins “astronauts” around, just like the real thing. The ride will spin as well as tilt during the ride to simulate gravitational forces and speed – everything from the extreme pressure of a blastoff to near weightlessness.

When Mission Space was first started, there was only one version. However, some riders found the ride too intense.  Because of that, there are now two different version of the ride.

At the beginning of the ride you have a choice as to which team you’d like to join, either this “Orange Team / More Intense” training or the “Green Team / Less Intense” training. The Green Team version will let guests enjoy the ride, but they won’t have to experience gravitational forces which are twice the Earth’s actual gravity.  Those “astronauts” who would like the original and thrilling high G force ride can choose the Orange Team / More Intense version of the ride for their experience and training. Either version gives you insight into the space race at Disney World.

Preshow Information for a Better Launch

Astronauts in training are invited to board the X-2 deep space shuttle which is located at the ISTC (International Space Training Center). The occasion is the 75th anniversary of humankind’s very first mission into the cosmos. Guests make their way to the recruiting center and a team of four is chosen, to undergo training and then the flight. Each member of this team is assigned a position and tasks to perform, during the flight. These four crewmember tasks include being an engineer, commander, navigator, or pilot. Before the mission starts, these trainees watch a short video about the mission where Gary Sinise will talk about what they’re supposed to do.

After the briefing for the mission, trainees make their way inside the space capsule and are side by side with other team members. Astronaut trainees will experience the video images and realistic sounds which are piped in.  You will experience an amazing journey as you takeoff on this training adventure to Mars.

If you were standing outside of the “spacecraft” for the Orange Team you would see the centrifuge whirl around. This provides actual G forces.  If you are prone to motion sickness, have back problems, or are concerned about being in a rather darker and small space for a few minutes, then choosing the less active Green Team version of the ride might be for you. You will land on Mars and then return to the earth.

After enjoying the ride, guests can enter the Mission Space Advanced Training Lab. There is interactive play space here so all ages can compete at different levels in the space race. There’s an arcade style game where Mars is explored on foot.  You can even create special video postcards which may be sent to anyone via e-mail.