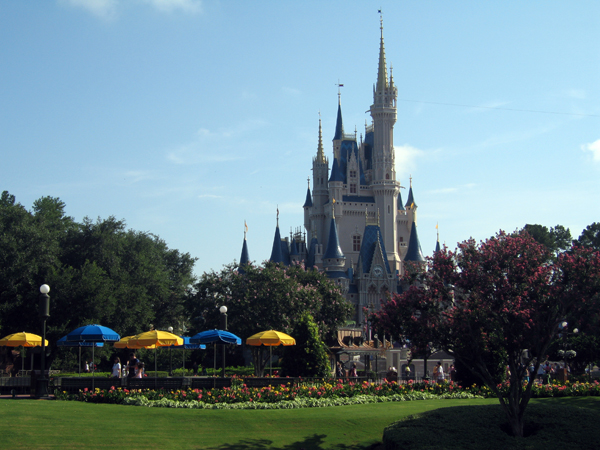 I like to say that calories don’t count at Disney World.

The average guest walks around 13 miles per day. That may seem like a lot – it’s like a half marathon – but it really doesn’t feel like that much when you’re busy all day walking from attraction to attraction.

So just how do you get so many miles in per day? Let’s take a look at the distances around each park. While these distances might not seem like a lot, you have to consider that they are just a starting point.  Beyond these distances, you will also walk from your hotel room to breakfast then maybe back to the hotel room and back to the bus stop then from the bus stop into the park. You also probably do some backtracking along the way as you explore everything each park has to offer.

Magic Kingdom is the most visited park in Disney World, so that’s a good place to start. This, however, is a relatively small park when compared to the others. If you were to only walk from Main Street USA, turn right into Tomorrowland and go through Fantasyland, Frontierland, and Adventureland ending back on Main Street, you’d walk 2.17 miles. This is an easy park to not backtrack if you plan correctly, so if you want to save your feet for later, follow the path in one direction.

Disney’s Hollywood Studios is the smallest of the four theme parks at somewhere around 1.4 miles. You’ll log these miles by walking the park’s perimeter down Hollywood Blvd to Sunset Blvd, Animation Courtyard, Pixar Place, Grand Avenue, over to Echo Lake, and back to the entrance.

Disney’s Animal Kingdom is the second largest park in walking distance. You can walk 2.27 miles following all the paths. Since you’re meant to get lost and explore this park- that’s how the Imagineers imagined it- you’ll probably do the most backtracking and walking here.

Epcot‘s Future World and World Showcase combine for a total of three miles when walking in one direction around and skipping the short cut down the center. Since you’ll probably also explore each of the pavilions, you’ll actually achieve more than this.

Disney Springs is full of shops and restaurants to enjoy. If you start at one end and walk to the other, you’ll have walked 1.83 miles. Again, since you’ll probably be walking around stores, it will result in much more.

How many miles have you walked in one day at Disney World?