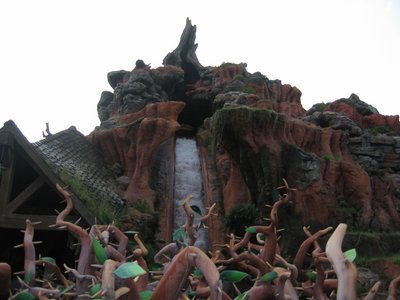 From the sounds of banjo and country music to the smell of hot popcorn to the sights of the old west, Frontierland is full of interesting detail.

A very low-tech but fun place to visit is Tom Sawyer Island.  Be sure to plan your visit earlier in the day – this huge playground-like area is only open until sunset.  Make your way to Harper’s Mill, the old mill painted red and powered by river water that makes enormous gears turn inside.  Ambush Cave is a dark area to explore, and Fort Langhorne – named after author Mark Twain – sits at the far end of the island and offers a terrific view of Big Thunder Mountain Railroad.

Each morning a Disney cast member hides six different paint brushes around the island – a tribute to the fun process of whitewashing picket fences.  If you find one of these paint brushes, show it to a cast member – they may just give you a special prize.

Tom Sawyer Island is a great place to get away from the pressing crowds and the noise of the Magic Kingdom.  Plan to spend a little time on the island enjoying nature and a little peace.

Hungry For Some Vittles?

The Pecos Bill Tall Tale Inn and Café is a quick service restaurant that serves lunch and dinner, including BBQ Pork Sandwiches and Hamburgers that you can top off with an amazing array of options at the fixings bar – including tomatoes, lettuce, BBQ sauce, and a crowd favorite – melted cheese.

If you look carefully, you will also find the Pecos Bill Code Of The West, which states “Respect the land, respect the defenseless, and don’t ever spit in front of women and children.”   Great advice and just a sample of the little detailing you will see around Frontierland.

All Aboard The Train

The Walt Disney World Railroad station in Frontierland represents the west coast of the United States – you have made the trip from New England (Liberty Square) through the Wild West and all the way to California.  Go upstairs into the loading area and listen carefully between the loud noises of the train arriving and departing.  You will hear the tapping that represents Morse code.  Do you know what that code spells out?  It is actually the text of the speech that Walt Disney delivered on the opening day of Disneyland.

A Fun Mountain With A Little Splash Of Water

Next to the Railroad station is Splash Mountain, a log flume ride based on the movie Song Of The South.  The main drop is 52 feet, and other guests can watch from a nearby bridge.  Every third boat makes a big splash.  But the boat itself doesn’t make the splash.  Instead, carefully timed water cannons create the effect.  After the drop, the boats enter a terrific scene where you can see many animal characters singing and dancing to the catchy song “Zip-a-Dee Doo-Dah.”

Some people get a little wet on this attraction, but most people come out pretty dry.  On busy days Disney can open up extended queue areas in the back of the attraction.  They are outside but are mostly shaded.

Another major attraction in Frontierland, and one of the most popular in the Magic Kingdom, is Big Thunder Mountain Railroad.  The railroad is actually a roller coaster that the entire family can enjoy together, although it is appropriate for older kids and adults due to the speed and some period of darkness.

The theme and design is amazing and detailed – you will see scenes reminiscent of Monument Valley and Bryce Canyon in Utah and plenty of mining supplies, from barrels to boxes of explosives.   The highest point in the attraction is 197.5 feet tall – just a half foot short of the top point in Cinderella Castle, and just 2.5 feet short of the maximum height that would require an airplane beacon – one that would ruin the effect of a wild west mountain.  As you travel on your run away railroad car, you might catch glimpses of animatronic figures like chickens and donkeys.  The train cars have great names like I.M. Brave and U.R. Courageous.

The Country Bear Jamboree is a hilarious animatronic show featuring twenty different bears who sing, dance, and tell corny jokes.  The show lasts about 15 minutes and the theater, appropriately called Grizzly Hall, can hold quite a few gusts – so don’t be discouraged if you see a big crowd of people spilling out into the street waiting for the next show.

The show is a treat and features three wise-cracking heads of moos and stags – which look like they just came from the taxidermists office but actually come to life and interact with the other bear performers. Highlights of the show include Henry, the friendly emcee who happens to be a brown bear, Wendell who plays a mean mandolin, and Teddi Barra who is lowered down from the ceiling above the audience on a swing and sings a song.

The Country Bear Jamboree is one of the last attractions that Walt Disney himself was personally involved in developing.   The show was based on an idea planned for a Disney park that was never built – a ski resort in Mineral King, California.

The arcade allows kids and adults alike to test their skills with a rifle as the shoot beams of light at targets in a country cemetery, jail, bank, and hotel.  If you hit the target it becomes animated and puts on a little show!

A trip to Frontierland is like a trip back in time to the Wild West.  Enjoy all the little details and stories that this area has to tell.