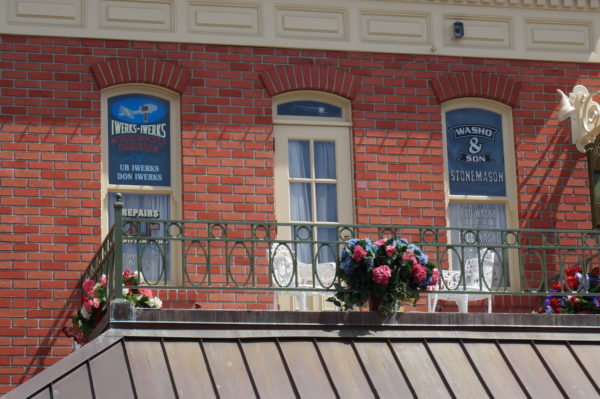 Have you ever taking the time to check out the windows on Main Street USA?

We’ve looked at the tributes to Disney  Family and Executives windows as well as some of the original team.

Today we’re going to finish up our journey with at look at some of the Imagineers, many of whom were part of WED Enterprises (the name used before it became Imagineering), who made Walt’s dreams a reality both during his life and posthumously.

There are lots of windows on Main Street, but fewer than 200 people have been honored in this way. Besides the Disney Legend award, which many window recipients have also earned, it’s one of the highest honors a Disney Cast Member can earn.

WED Enterprises was the original Walt Disney Imagineering, and these men were an integral part of the original team.

Tony Baxter started scooping Ice Cream on Main Street USA in Disneyland in 1965 and quickly moved up to a WDI Creative Developer, show designer, and Executive Vice President of Design for Parks. He designed Big Thunder Mountain Railroad, Splash Mountain, and the original Journey into Imagination.

Dave Burkhart was VP of Show Quality Assurance, and Johnson was a Project Show Designer in the model shop.

Gary Younger was the director of the MAPO division of Walt Disney Imagineering. MAPO, from MAry POppins. It was his duty to oversee the making of the new audio animatronics including the singing robin from Mary Poppins movie.

Bob Burr spent more than 40 years with the Walt Disney Company. As an Imagineer, he designed more than 100 ride vehicles including Autopia, Haunted Mansion, the monorail, Submarine Voyage, and the Matterhorn Bobsleds. His work earned him the title of Disney Legend in 2004, and he was unofficially the Director of the Special Vehicle Department.

Ub Iwerks is, arguably, Disney’s earliest employee. He started working with Walt in 1919 when they lived in Kansas City and worked at the Kansas City Slide Company. They left these jobs, and the Disney brothers moved to California. As soon as the Walt Disney Studio was official, Walt sent for Ub. Ub and Walt created Oswald together, and Ub was the only animator who stayed faithful to Walt when Oswald was stolen from Disney. Shortly afterwards, Ub helped Disney create and launch Mickey Mouse and animated many of Mickey’s short films. He briefly left to create his own cartoons, but they weren’t successful, so he rejoined Disney.

This window above Main Street Bakery celebrates Ub’s work with developing cameras and photographic solutions to animation and in the theme parks. His work with synchronizing projectors to create one wide image contributed to the creation of it’s a small world and Hall of Presidents.

Don Iwerks, who is also honored in the window, also became a camera developer, worked with his father, and worked for Disney. Both made significant contributions to Walt personally and the Company, so naming Iwerks a Disney Legend in 1989 was an easy decision.

The Washos were also a father and son team who worked for Disney. Their window is pictured above with Iwerks and Iwerks. Bill, the father, was a senior designer for WED Enterprises; he worked on façade prefabrication and architectural ornamentation. His son, Bud, worked with him on the facades in Disney World.

Campbell was a conceptual artist and worked specifically on the Enchanted Tiki Room, the Haunted Mansion, and with Claude Coats on Pirates Of The Caribbean.

Gibson was a sculptor who worked on audio animatronic figures for The Hall of Presidents and also sculpted the Partners Statue. Until his death in 2015, he continued to come out of retirement to sculpt each new president.

Herbert Ryman is a conceptual artist who is credited with creating the original drawing of Disneyland in one weekend along with Walt Disney. He created many more concept paintings of lands and attractions until he retired in 1971.

Mary Blair is perhaps one of the best known Disney artists and is famous for her whimsical designs especially in it’s a small world and in the murals in Disney’s Contemporary Resort.

Redmond, a conceptual artist, designed murals on the passageways through Cinderella Castle.

All of these men worked in the model shop for Disney’s Imagineering. Sewell ran the shop from 1960 to 1981, and Malcolm Cobb was his assistant. Joerger was the Art Director and specialized in finishes especially in rock work, and distressed timbers. He designed the waterfall that was in the atrium of Disney’s Polynesian Resort before it was remodeled. Their window is above Uptown Jewelers.

Yale Gracey, Bud Martin, Ken O’Brien, and Wathel Rogers were members of the Special Effects Department for Walt Disney Imagineering. They are honored with a window above the Main Street Confectionery.

Gracey is described as a special effects pioneer. He worked on the Haunted Mansion and Pirates of the Caribbean and is even given a special place as a central theme of Haunted Mansion: “Master Gracey”.

O’Brien was an animator who specialized in facial and mouth action on Audio Animatronics. His work can be seen in Country Bear Jamboree, The Hall of Presidents, and Pirates of the Caribbean.

Wathel Rogers is also described as a pioneer of the art and often called the Grandfather of Audio Animatronics. He worked on Project Little Man, which produced the Dancing Man.

Roger Broggie was the first Imagineer. He is responsible for interesting Walt in small-gauge railroading, he worked on Project Little Man, and he was the VP of WED’s R&D Operations.

He was a mechanical engineer and a precision machinist, and he is credited with installing the first multiplane camera and working with Ub Iwerks on special effects.

Besides a window at the corner of the Fire Station and the Emporium, his work is also commemorated with a locomotive on the Walt Disney World Railroad. You can see his handy work at Disney’s Wilderness Lodge in the Carolwood Pacific Railroad Room in Boulder Ridge Villas.

Chapman, Hartley, McKim, Plummer, and Prinzhorn were graphic design specialists for Walt Disney Imagineering. They worked at the home office in Burbank, CA creating story sketches for attractions including it’s a small world, Hall of Presidents, The Carousel of Progress, Haunted Mansion, and park maps.

The men listed on this window were all part of the MAPO Group, which stood for MAry POppins.  MAPO was the manufacturing arm of the Imagineering team, and they worked specifically on Audio-Animatronics and manufacturing.  Walt was able to fund MAPO based on the profits earned from the successful Mary Poppins film.

Booth was the WDI Shop manager and worked on creating the parking lot trams.

Broggie was the son of the original Imagineer, and he was so close to Walt Disney that he called him Uncle Walt. Roger started working for Walt at age 11 tending the Carolwood Pacific Railway. He started in the WED Machine Shop as an apprentice and quickly became known as an Audio Animatronics pioneer especially for his work in the 1964 World’s Fair. He not only made Great Moments with Mr. Lincoln, Pirates of the Caribbean, Haunted Mansion, and Enchanted Tiki Room possible, he also brought Herbie the Love Bug to life. Although unfortunate, he did what he loved until his untimely death in 2012 when he fell from a parade float while working on it.

Bill Wash was the writer and producer of many movies and television shows including The Love Bug, One Hour in Wonderland, The Mickey Mouse Clubhouse, and, probably most notably, Mary Poppins, which financed the Walt Disney World land purchases.

Main Street USA windows:  Do you know the Imagineers who are honored?