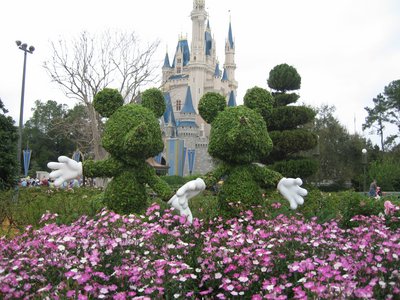 The icon and the centerpiece of the Magic Kingdom is Cinderella Castle.  Beyond the obvious surface beauty of this engineering masterpiece are many details that add layers and layers of design genius.

The Inspiration For The Castle

Herbert Ryman was the chief designer for Cinderella’s Castle.  He drew inspiration from both the movie Cinderella and also Sleeping Beauty, which spawned the castle at Disneyland.  He also drew inspiration from real world buildings, such as Versailles in France, the Neuschwanstein castle in the Bavarian area of Germany, and castles in Spain.

More than just an amazing building to view, there are stories, shops, and dining to enjoy in Cinderella’s Castle.  Let’s take a look at some of the more interesting aspects of this beautiful building.

Do you know how many bricks were used in the construction of the castle?  None!  While the castle appears to be made of bricks, the building itself was made from steel and concrete, with a plaster and fiberglass exterior design to stand up to the beating sun and howling winds of Florida’s sometimes unforgiving environment.  The roof shingles are made from the same type of plastic used to produce computer cases.

According to Wikipedia, there are 27 towers on the Castle, each numbered from one to twenty-nine.  Legend has it that two of the towers  – numbers thirteen and seventeen – were never built and installed after engineers discovered that nobody would ever be able to see them given the design of the Castle itself and the arrangement of other nearby buildings.

Cinderella Castle is surrounded by a moat, but there is no operating drawbridge.

Mosaics That Tell A Story

Inside the main arched walkway that cuts through the castle from front to back is a mosaic mural that tells the story of Disney’s 1950 movie Cinderella.   With more than a million pieces made from glass, silver, and real gold, the tunnel unfolds the story of Cinderella and her wicked stepsisters Drizella and Anastasia.  Other characters from the story like the little critters from the forest show up as carved figures on the columns – a testament to Disney detailing.  Don’t just quickly cut through the Castle – linger for a few minutes to enjoy the artistic masterpieces.  The murals were designed by Dorothea Redmond and were created by a group of six craftsman and artists lead by Hanns-Joachim Scharff.  It reportedly took the team more than twenty-four months to painstakingly create the mosaics.

The Castle is home to Cinderella’s Royal Table.  Formerly known as King Stefan’s Banquet Call, The Royal Table restaurant offers a full breakfast buffet that is hosted by Disney Princesses who visit with guests.   It is very popular with guests and often requires reservations made well in advance of your visit to the Walt Disney World Resort.

When entering the restaurant you will immediately feel like royalty – the beautifully detailed medieval surroundings create a memorable environment, and the servers call little girls “princesses” and little boys “princes.”  Even grownups are greeted in royal style as “lords” and “ladies.”

At breakfast you can enjoy a meal with Disney characters including, of course, the princess Cinderella.  At lunch time, Cinderella herself makes an appearance and guests enjoy an extensive prix fixe meal.  Finally, at dinner, Princesses host another full meal.

Shopping Fit For A Princess

A dream come true for every little girl who aspires to be a princesses, The Bibbidi Bobbidi Boutique is a salon that offers make make up, hair dressing, and manicures.

Have you ever dreamed of staying the night in a castle?  How about the castle that happens to sit in the middle of the Magic Kingdom?  The two-bedroom “Cinderella’s Guest Suite” is decked out in the finest castle fare.  It is not available to the general public, but was awarded to randomly selected theme park guests during Disney’s Year of a Million Dreams promotion.  Today, word has it that Disney makes the special suite available to executives, movie and music stars, and other VIPs that Disney wants to impress as they make business dealings.

The Disney Coat Of Arms

The coat of arms for the Disney family stands guard at the front and the back of the castle, and family crests of executives and engineers that the Disney Company wanted to honor appear in the lobby and on banners inside the restaurant.  In addition to the Disney coat of arms, more than 40 others are represented in the Castle, including those for:

– Duck Nunis: Dick started working at Disneyland in 1955 as a summer job.  Over the years he held roles in attractions and eventually helped develop Walt Disney World.  He eventually became vice president of Walt Disney World and Disneyland, and was a member of the Disney Board Of Directors.  He became a Disney Legend, the highest honor the company can bestow on an employee, in 1999 – the year he retired.

– Marc Davis: Marc was an animator and Imagineer who is known for drawing many famous Disney female characters, including Cruella De Vil and Tinker Bell.  As an Imagineer he helped with the development of many attractions including Pirates of the Caribbean and the Haunted Mansion.  He was named a Disney Legend in 1989.

– Marty Sklar:  Marty was part of a team who developed attractions for the 1964 World’s Fair.  He also played a major role in the development of Walt Disney World.  He was named a Disney Legend in 2001.

A Beauty To Behold

Both an engineering marvel and a beautiful work of art and architecture, Cinderella Castle has grown to become not only the symbol of Walt Disney World and the Magic Kingdom but also of the Walt Disney Company itself.  The next time you visit, take a few minutes to admire the beauty in the details of Cinderella Castle.