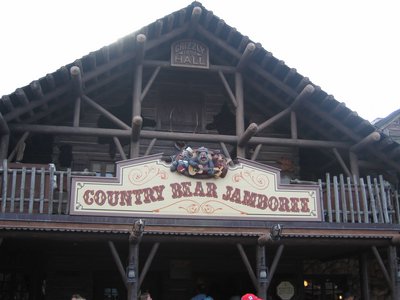 The Country Bear Jamboree is a musical revue show that takes place on the edge of Frontierland at Walt Disney World’s Magic Kingdom. Unlike a typical musical revue – if such a thing exists these days – this show features a band composed entirely of audio-animatronic bears. Each bear sings or plays an instrument, and all have distinct voices and personalities recorded by Disney voice artists.

The show takes place in the indoor auditorium at Bear Hall, and each performance lasts a little bit longer than 15 minutes. The revue consists of spoken interactions between the many characters, and a variety country western songs, most of which are lively and humorous, or slow and heartfelt.

Long lines are not common at this attraction, and the show does not have a FASTPASS option. The large auditorium can seat so many guests that people usually do not have to wait longer than the duration of one or possibly two of the constantly repeated shows before they are seated.

History of the Jamboree

Walt Disney originally planned that the Country Bear Jamboree would be part of a ski resort in the Mineral King area of the Sierra Nevada Mountains in California. Disney himself helped to design the show, and when the ski resort idea fell through the Disney Imagineers instead brought the Jamboree to Florida, where has been a part of the Magic Kingdom ever since. It was the very first attraction to debut at Walt Disney World and later arrive at Disneyland Park and Tokyo Disneyland.

All of the songs performed in the Jamboree are original Disney creations. Imagineer Xavier Atencio and composer George Bruns collaborated to create the tunes for the show. Bruns worked on many Disney films, composing the score for The Jungle Book and the theme song for Herbie: The Love Bug. However, his most enduring creation may be another song composed in collaboration with Xavier Atencio: the Pirates of the Caribbean theme song “Yo Ho (A Pirate’s Life for Me)”.

There are a total of eighteen bears in the Jamboree, and a few other critter characters who help to host the show and entertain the guests. At the start of the revue, three mounted animal heads come alive and begin to chat – a moose named Melvin, a bison named Buff, and a deer named Max. This talkative trio helps to introduce the audience to the rest of the cast.

Henry, a large brown bear, serves as the emcee of the show. Among the eighteen bear musicians there are different musical acts, and Henry introduces each group and the songs they will be singing. Henry wears a live raccoon named Sammy as a cap, and is voiced by Disney voice legend Pete Renaday – who also gave voice to characters at seven other Disney theme park attractions from the Tomorrowland Transit Authority to the Haunted Mansion.

The show also features the guitar-playing duo of Liver Lips McGrowl and Terrence (also known as Shaker). McGrowl’s signature solo number is “My Woman Ain’t Pretty (But She Don’t Sware None)”, while Terrence croons in “How Long Will My Baby Be Gone”.

Mandolin-wielding Wendell, and the bow-tie sporting, fiddle-playing Ernest don’t have solo numbers, but they join in several songs with Henry and the Five Bear Rugs.

A brown bear named Trixie provides vocals for the Jamboree, as does Teddi Barra, who descends from the ceiling on a swing festooned with pink roses. Trixie gets her moment in the spotlight with “Tears Will Be the Chaser for Your Wine”, while Teddi Barra shines during “Heart, We Did All We Could”.

Gomer plays the piano, joining Henry in the opening number “Pianjo” and the Five Bear Rugs in “Bear Band Serenade”. The largest and fattest bear, Big Al, plays an out-of-tune guitar and sings “Blood on the Saddle”.

One of the featured groups is the Sun Bonnet Trio, with blue bonnet wearing singing triplets named Bunny, Bubbles, and Beulah. These little brown-furred sisters sing in three part harmony, and their big, humorous number is “All the Guys that Turn Me On Turn Me Down”.

The Five Bear Rugs stars Zeke on the banjo and dishpan, Zeb on the fiddle, Ted on the cornjug and washboard, Fred on the mouthharp, and Tennessee on a one-stringed pseudo-instrument called a thang. Baby Oscar, clutching his teddy bear, also appears with the Five Bear Rugs, although he does not speak or play an instrument. The Five Bear Rugs lend their musical talents to several tunes, and play alone during the lively “Devilish Mary.”

In 2002, Disney transformed the Country Bear Jamboree into a live action comedy film. It was the third film based on a Disney theme park attraction, after 1997’s Tower of Terror, and 2000’s Mission to Mars. The animatronic bears in the film are brought to life by Jim Henson’s Creature Shop, and the movie follows the story of a young bear attempting to reunite the Country Bears for a final performance. Fourteen of the Jamboree’s eighteen bears appear in the film, and it features several original songs written for the film.

Who Will Enjoy the Jamboree?

The Country Bear Jamboree is full of goofy songs and corny humor. Many long-time Disney visitors enjoy the show as a nostalgic experience, while families can appreciate the innocent humor, colorful characters, and lively dialog. Teenagers and young adults are less likely to enjoy the corniness and the old-fashioned country western music unless they remember the show fondly from their childhood.

Although the show is definitely intended to be child-friendly, it is possible that the dark theater and the sudden way in which the strange characters come to life may be startling or even frightening for very young children.

One perk of the Jamboree that all ages can appreciate is that the show is indoors and air-conditioned. At the height of the Florida summer, this provides a great chance for guests to cool off and give their feet a rest after standing in long lines around the park.