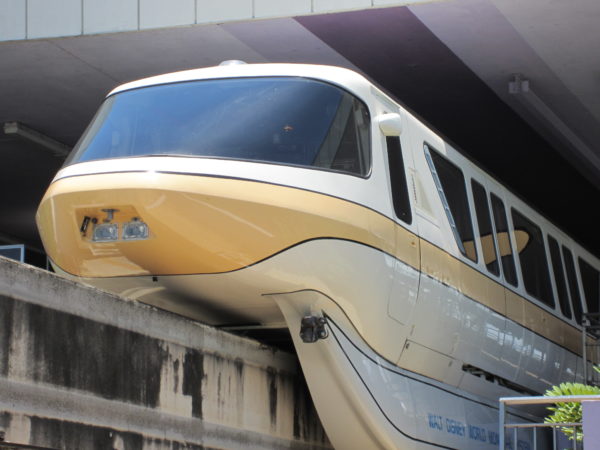 Yellow monorail at the Ticket And Transportation Center

Interesting Facts About The Disney Monorails

When you ask people to think about Walt Disney World, they typically think about Cinderella Castle.  But what comes to mind next?  Usually it is the monorail.  The Disney World monorail is something that most people who visit Disney World experience, but might not know the fascinating history and facts behind this fascinating transportation system that is more than just a way to get from one place to another – it has become an icon unto itself.  The Disney World monorail literally transports you away from the real world of your car and the outside world to a different, magical place where fun and fantasy reign.

Disney actually first saw a monorail when in was on vacation in 1958 with his wife in Wuppertal, Germany.  That system in Wuppertal, which had been operating for more than 50 years at that point, hangs beneath a track.  Walt and Lillian took a ride on the monorail.  Legend has it that Walt loved it, but Lillian got sick from the way the cars swung beneath the track.

The original monorail that debuted in Disneyland in 1959 was based the Wuppertal monorail, and was built the Alweg Company which was based in Cologne-Fuehlingen, Germany.  As a company Alweg ran into financial problems and was eventually disbanded as a stand-alone entity; different components of the company absorbed by other companies.

The monorails that debuted at Walt Disney World in Florida in 1971 were also designed by Alweg but were built by Martin Marietta in Florida.  These monorails had upgrades when compared to the Disneyland monorails, and were called the Mark IV series.

There were originally ten monorails in the fleet, but two more were added in 1977 – lime and coral – bringing the total size of the Disney World monorail fleet to twelve trains.

The original Disney World track system included two primary tracks – the express loop that connected the Ticket and Transportation Center to the Magic Kingdom, and the resort loop which made stops at those two locations plus Disney’s Contemporary Resort and Disney’s Polynesian Resort.

The beams on which the monorails ride were built in Oregon and were shipped to Florida on trucks.  The center of the theme is made of Styrofoam, which in encased in concrete and steel – making them both light weight and strong.  There are more than 400 beams throughout the monorail network.  The highest point of the monorail track is at the entrance to the Contemporary Resort Hotel, which is more than 60 feet above the ground.

The monorails actually sit on the beams with rubber tires that sit on top of the track.

In 1982 Disney expanded the monorail from the Transportation And Ticket Center to Epcot.

In 1989 Disney upgraded the monorail fleet from the older Mark IV model to the new Mark VI model.  The previous Mark IV models were designed where each train of the monorail puts passengers into an individual row of seats.  With the Mark VI models, the entrance doors opened into a larger cab with both seating benches and also standing room.

The Mark VI monorails than were built by Bombardier, a company which builds both mass transit systems and aircraft.   The newer models held 30% more guests and had improved air conditioning.  The Mark VI had doors which could automatically open and close.  With the old Mark IV models, Disney Cast Members needed to manually walk up and down the length of the monorail to close the doors manually.  The Mark VI models were also taller.

Several of the old Mark IV monorails that were decommission as part of the system upgrade in the early 1990s were sold to Bally’s Resort in Las Vegas, where they were used for a period of time.  One was actually sold on eBay it was purchased by a private individual.

The monorail upgrade from Mark IV to Mark VI was complete in 1993.

If a monorail train breaks down, the diesel powered towing machine can pull it back to the main in stock.

In 2007 the current monorail control systems were upgraded and are now controlled by Microsoft Windows.

Each monorail travels more than 60,000 miles a year.  Before they were retired, the old Mark IV monorails traveled more than 10 million miles.  The reliability rate is reported to be an astounding 99.9%.

Are you a monorail fan?