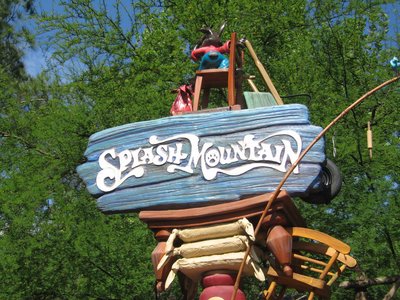 Splash Mountain is a log flume style ride in Frontierland at Disney World’s Magic Kingdom them park. It is one of two distinctive mountain-themed thrill rides that bookend this land, along with the Monument Valley inspired peaks of Big Thunder Mountain Railroad. These two rides join Tomorrowland’s Space Mountain as the three true thrill rides in the Magic Kingdom.

The ride itself is themed after the animated fables that appear in the 1946 Disney film Song of the South. These fables feature the villainous but bumbling Br’er Fox and Br’er Bear in their endless attempts to catch wily Br’er Rabbit. While some elements of this classic film are now considered to be less that politically correct, the attraction it inspired has become one of the signature attractions at Disney’s most popular park, and a must-ride for guests both young and old.

Splash Mountain debuted in 1989 at Disneyland Park, and by 1992 the hugely popular ride had also made its way to Walt Disney World in Florida and to Tokyo Disneyland in Japan. Many of the characters that appear in Splash Mountain were originally present in the America Sings attraction at Disneyland in Anaheim. That attraction was suffering from low attendance, and the Disney imagineers wanted to create a new ride that would draw more guests.

The challenge the Imagineers faced was to create a log flume ride that would seem unique amongst the many flume rides that are standard at amusement parks across the world. By incorporating over 100 audio-animatronic creatures and unique Disney characters from Song of the South, Disney’s design team succeeded in creating a ride that is unmistakably Disney from top to bottom – literally!

Guests of the ride sit in hollow log boats with four rows of seats that are wide enough for about three people. The boats float around the tunnels of the mountain, past scenes that illustrate a classic story starring Br’er Rabbit. In this fable, Br’er Rabbit leaves home in search of adventure, outwits Br’er Fox and Br’er Bear time and again, and eventually tricks them into returning him to the safety of his briar patch home.

The majority of the ride is fairly mild, as the log boats float past waterfalls and through caves, taking a few short drops and quick turns along the way. But every single guest knows what is waiting for them at the end – a steep drop down the five stories from the top of the mountain to the briar patch below. As they wait in line, guests will be able to watch boat after boat make this drop, and hear the gleeful screams coming from the riders on board.

To distract you from the drop that awaits at the end, there are songs and lively audio-animatronic scenes throughout the ride. After the descent into the briar patch, there is a final tranquil scene of Br’er fox reunited with his family and friends, floating peacefully on a Mississippi riverboat. All the critters are joining in a chorus of Zip-A-Dee-Doo-Dah, one of the most enduring songs in the Disney canon. You may very well end up with this song stuck in your head for the minutes, hours, or even days following your Splash Mountain visit.

Not surprisingly, the long and watery descent at the end of Splash Mountain ends with…a big splash! All riders will get at least a little bit wet, and those who are seated at the very front of the log boats, or towards the front on the right hand side of the boats, often get thoroughly soaked. On hot days, those seats are extremely popular, and you may have to “altruistically” let a few groups pass you in line in order to get the seats you want.

Splash Mountain has cameras in place at the end of the ride to take a photo of each log boat in mid-drop. As you exit the ride, be sure to stop and wait for the photo of your boat to appear. The photos are available to purchase from the photo stand, but most guests just like to enjoy a good laugh when they see the expression on their faces, usually mid-scream, as they fall.

FASTPASS tickets are available for Splash Mountain if you want them. These tickets allow you return at a specific time – usually within a range of one hour – and enter a much shorter line for a specific attraction. Many of the most popular attractions at Disney World have a FASTPASS option. However, it is only possible to hold on to one FASTPASS at a time, so smart Disney World guests will plan when and where to uses the passes most effectively.

Lines for this popular attraction are frequently quite long, but a lot of the wait is within the shady confines of mountain tunnels, and is therefore one of the more manageable long lines at the park. Even on the hottest days, the Splash Mountain line is not that bad. It is also a fun part of the overall experience to watch a few of the log boats drop into the briar patch before you yourself climb aboard.

Who Can Ride Splash Mountain?

The minimum height requirement for riding Splash Mountain is 40 inches, or three feet, four inches. Most children will reach this height at approximately five years of age, and a line for children to measure themselves against can be found at the entrance to the ride. Children under the age of seven need to be accompanied by another guest who is at least 14 years old.

Although the drop at the end can be intimidating, much of the ride is very tame and will appeal strongly to younger visitors. The clever animatronic scenes will entertain older visitors, too – it is truly a ride that almost anyone can enjoy. Even the final drop is more thrilling than scary, although it should still provide great entertainment for even the hardiest roller coaster thrill seekers.