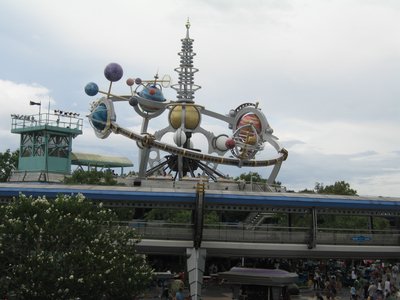 The Astro Orbiter is one of several aerial carousel, or telecombat style rides around Walt Disney World. These rides were popular at fairs and amusement parks well before the creation of the first Disney theme park, but Disney adapted the idea to include the unique and detailed theming that has become associated with all Disney theme parks.

Aerial carousel rides consist of multiple arms that rise and fall as they rotate around a central axis. Riders sit in cars at the end of each arm to create the impression that they are flying through the air. Some rides program the arms to rise and fall in a coordinated fashion, while others allow riders the freedom to make their arm rise and fall as much as they want while the ride is spinning.

The first and most famous aerial carousel ride at a Disney park was Dumbo the Flying Elephant, which opened the same day that Disneyland Park in California was opened to the public. This ride was later duplicated in time for the opening of Magic Kingdom in 1971, and both versions of the ride are tremendously popular.

The success of Dumbo the Flying Elephant prompted Disney to include a second aerial carousel ride at Disneyland, and later at Magic Kingdom. While nothing like flying cartoon elephants of Dumbo had ever been seen before, the flying rockets of the Astro Orbiter closely resembled similar rocket rides already seen around the world. However, the futuristic appearance of the ride made it a perfect fit in the world of Tomorrowland.

The Astro Orbiter debuted at Magic Kingdom in 1974 under the name Star Jets, during a Tomorrowland expansion that also saw the arrival of Space Mountain. The ride sits on top of a platform in the middle of Tomorrowland, inside the loop of the Tomorrowland Transit Authority people mover attraction. The location and appearance of the ride both echoed its sister attraction at Disneyland, but the Disneyland Astro Obiter has since moved from its towering central location to ground level at the entrance of Tomorrowland. Magic Kingdom’s Astro Orbiter, on the other hand, remains the centerpiece of Florida’s Tomorrowland.

The ride received its current name in 1994 during the renovation of Tomorrowland. Like the rest of the area, the attraction was refurbished and re-colored to resemble the comic book worlds of Flash Gordon and Buck Rogers. This slightly cartoonish representation of the future is Disney’s nod to the fact that many of the futuristic ideas that the original Tomorrowland celebrated are now the ideas of today, or even yesterday.

The line for the Astro Orbiter includes an elevator ride to the top of the Tomorrowland Transit Authority platform. The gentle nature of this ride and its similarity to the hugely popular Dumbo have made this a go-to Tomorrowland attraction for kids, while adults can appreciate that the ride affords terrific views of the rest of Tomorrowland, and even of the A-frame tower at Disney’s Contemporary Resort in the distance.

Each arm of the Astro Orbiter carries a silver and gold rocket-shaped car with green and red trim. The rockets allow two guests to sit one in front of the other, and the person in front can control the height of the rocket ship by either pushing forward or pulling back on a control stick. Unlike Dumbo the Flying Elephant, the Astro Orbiter does not lift each arm to its full height as the ride is coming to its conclusion.

Outside the orbit of the rockets, colorful planets are suspended from a large silver superstructure. From a distance the attraction is an impressive sight, and up close the proximity of the planets as you whizz by helps to create an extra thrill. Riders looking for an extra thrill on this attraction should consider riding at night, when all the lights of Magic Kingdom make the view even more spectacular.

Small Children and the Astro Orbiter

Dumbo the Flying Elephant is one of the quintessential Disney park rides for little kids, so taking small tykes on the Astro Orbiter may seem like a no brainer. However, adults with children and/or a fear or heights should keep in mind that the rockets fly much higher than the cartoon pachyderms over in Fantasyland. The distance from the main level of Tomorrowland to a rocket at the highest extension of its arm is around 80 feet. Disney has made some concession to this fact by allowing riders to control the height of their rocket from start to finish, but even at their lowest orbit the Astro Orbiter rockets are still higher than the flying elephants.

Most children (and adults!) will love the Astro Orbiter in spite, or perhaps because of, the height. However, it’s a good idea to take very small children on Dumbo or the Magic Carpets of Aladdin first to make sure the height of those rides is not a problem.

Wait Times for the Astro Orbiter

There is frequently a longish wait for this ride, partly because the ride can only hold up to 24 people at a time (and frequently hold fewer to accommodate solo individuals or parties with an odd number of people). The majority of the wait takes place on the main level of Tomorrowland, while Disney cast members send a certain number of people up the elevator every few minutes to fill the next flight.