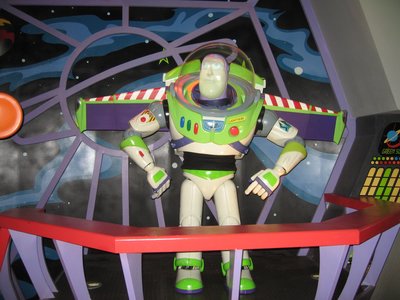 Buzz Lightyear’s Space Ranger Spin is one of a series of Disney theme park attractions inspired by the famous space ranger toy from the Pixar “Toy Story” films. The ride is located in the Tomorrowland area of Magic Kingdom, next to the Tomorrowland Transit Authority and Astro Orbiter platform.

The Magic Kingdom attraction was the first of this series to open, debuting in 1998 while “Toy Story 2” was in production. The ride combines video game and omnimover elements to create an interactive story. The attraction has enjoyed great acclaim and popularity since its opening, even earning the Reader’s Choice award from Disney Magazine as the Best Magic Kingdom Attraction for Young Kids in 2004.

As riders approach the boarding platform for Space Ranger Spin, Buzz Lightyear himself welcomes them to Star Command and explains their mission. This Buzz is largely animatronic, although his face is a screen on which an animated version of his face, synced to the dialogue, is projected. Riders with a keen ear may be able to tell that the voice of Buzz for the ride is not that of Tim Allen, who voiced Buzz in the films. Instead, Buzz has the voice of Pat Fraley, who also provided the space ranger’s voice in several video games.

Guests then board two-person omnimover vehicles referred to as space cruisers that are each affixed with two laser cannons. The lime green and purple of these vehicles echo the design of Buzz. The goal of the ride is to hit as many “Z” targets on Zurg’s robot henchmen as possible with your laser cannon. Below each cannon is a scoring panel that tallies your points as you hit the targets.

As the vehicles move forward, the voice of Buzz Lightyear explains how to rotate your space cruiser, which can rotate 360 degrees, and how to operate your laser cannon. Then the battle commences, as the vehicles enter the first of several scenes in which large toys and other creatures create the illusion that you have shrunk to the size of a child’s toy.

After passing “blasting off” through the speed tunnel, the space cruisers enter the robot room, where robot toys emblazoned with “Z”s soar through space. Riders may spot minor characters from “Toy Story” such as an orange Rock ‘Em Sock ‘Em robot.

Then the space cruisers enter Planet “Z”, where strange alien creatures fill the skies. One such creature is clearly inspired by the man-eating plant Audrey 2 from the musical and film “Little Shop of Horrors”, while another resembles an alien-ified verson of Mike Wazowski from “Monsters, Inc”.

The inside of Zurg’s ship is the next destination for the omnimovers. Crewed with glowing robots and controlled by Emperor Zurg himself, the ship is piled high with stolen batteries. Little Green Men cheer you on as you rack up points and then head toward the ship’s escape hatch.

The next section of the ride is very video game-like, as animated robot space creatures and ships zip around the darkness of space, posing tricky moving targets for your laser cannons. These targets are worth a lot of points on the score counter if you can manage to hit them.

The final interactive stage of the ride features the final showdown between Emperor Zurg and Buzz Lightyear wth his crew of junior space rangers. Zurg can be seen controlling a wicked looking spider-legged, rocket powered machine that appears to be inspired by one of the mutant toys from the original “Toy Story” film. The conclusion of this segment shows the Little Green Men happily holding their recovered batteries, while Emperor Zurg hangs dejectedly from the metal Claw.

A big reason behind Space Ranger Spin’s instant popularity is that it can be great fun for adults as well as children of all ages. Small children will be enthralled by the stunning visual sights of the attraction, while older children, teenagers, and adults can get competitive with the laser cannons and try to post a top score.

The imagery is so bright and toy-like that even very small children are unlikely to be scared – even the Evil Emperor Zurg is not particularly frightening, especially when compared with villains in other Walt Disney World attractions.

Buzz Lightyear’s Space Ranger Spin was the first Disney theme park attraction to take its inspiration from any of the popular Disney/Pixar animated films. The ride opened one full year before the theatrical release of “Toy Story 2” in spite of the fact that the ride contains many elements inspired by characters and plotlines from the second film in the franchise.

In this sequel, we learn much more about the Buzz Lightyear space ranger toy, of which the “Toy Story” star is one. We met his nemesis, the villainous Emperor Zurg, whom Buzz battles in order to keep Zurg from taking over the galaxy. Buzz Lightyear’s Space Ranger Spin recruits riders to join him as junior space rangers in the battle against Zurg and his robots, to prevent them from stealing the crystallic fusion cells (batteries) from the adorable Little Green Men.

The ride is the third attraction to be housed in the south show building of Magic Kingdom’s Tomorrowland, and contains structural elements that have been recycled from the previous rides, such as the speed tunnel. The popularity of the attraction since its opening has probably secured its future in that space for decades to come.