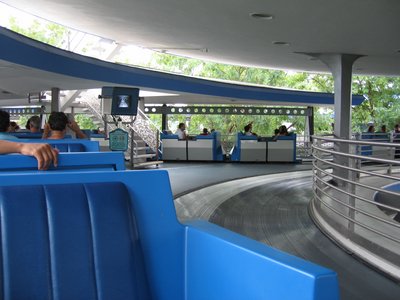 The ride gives visitors a look at the other Tomorrowland attractions, as well as an architectural model displaying a piece of never-realized Walt Disney World history. Surrounded by faster and flashier attractions, the Tomorrowland Transit Authority PeopleMover is relatively low priority for most visitors to Tomorrowland. However, the ride has developed a loyal and appreciative following among experienced Disney World visitors, and visitors who appreciate the attraction’s place in the history of the resort.

The Tomorrowland Transit Authority uses a continual boarding system for its open air cars. Escalators take riders to the elevated boarding platform, where they step onto a moving walkway that allows them to board the moving cars as though the cars were stationary.

The cars are pulled along the track magnetically, making the system emissions and pollution free. Walt Disney hoped that the continuous movement of the system as well as the simple nature of its mechanics would eliminate the delays, crowds, and breakdowns from urban public transportation. In its miniature form at the Magic Kingdom the experiment seems to have been successful – the ride is both reliable and reliably free of long lines.

The beginning of the ride takes riders in a half loop around the platform before passing past Stitch’s Great Escape and through the Star Traders gift shop. Passing through a dark tunnel, riders have the chance to view a complete scale model of EPCOT. The cars then pass behind the grandstand of the Tomorrowland Speedway, and over mini race cars traversing the loop.

Space Mountain looms directly ahead, and the PeopleMover passes directly below the launch area, with the Alpha and Omega tracks on either side. It then passes into the main building that houses the towering roller coaster track. In the darkness, all you can hear is the soundtrack, the rumble of the roller coaster cars, and the screams of the riders as they descend the track.

After passing part of the way back over the Tomorrowland Speedway, the track splits to the left and heads toward the Carousel of Progress. The final attraction on the tour is Buzz Lightyear’s Space Ranger Spin, and riders can hear the sounds of young space cadets battling the Evil Emperor Zurg as they pass overhead. At the end of the ride, the track passes by the entrance to Tomorrowland, affording a wonderful view of Cinderella Castle.

Who Will Enjoy the Tomorrowland Transit Authority?

The Tomorrowland Transit Authority is unlikely to be the greatest highlight of anyone’s visit to Magic Kingdom or Tomorrowland. However, it can be a worthwhile stop for Walt Disney World novices and veterans alike. New visitors looking for an introduction to Tomorrowland can appreciate the comprehensive overview and glimpses of the various attractions as they plan the rest of their time. The line is typically short or nonexistent, so visitors don’t having to worry about losing too much time out of their day in order to take the tour.

Veterans of Walt Disney World know the value of a ride with almost no wait time that allows you to rest your feet for 10 minutes. When not indoors, the Tomorrowland Transit Authority track is covered by a roof along the length of the track. Moving in the shade in and out of air conditioned buildings makes the PeopleMover a pretty nice pace to relax for a short time and take a break from the crowds – as well as appreciate the history of the attraction.

Walt Disney was an innovator, and a man who fully believed in the promise of a better future that new technology brings with it. When he began to sketch ideas for Walt Disney World in Florida, he envisioned much more than a replica of California’s popular Disneyland Park. In addition to resort hotels and golf courses that would transform the Florida property into an elaborate resort, Disney also envisioned an experimental city dedicated to promoting advances in technology and urban living.

This city, dubbed the Experimental Prototype Community of Tomorrow, or EPCOT, was to have a radial design similar to Disneyland and Magic Kingdom, with a densely populated center fanning out to less dense areas. At the very center would be a downtown business area completely enclosed from the elements, with high density apartments surrounding the business center.

Disney envisioned the city to be a completely pedestrian friendly, car-free community. A monorail like the one constructed for Disneyland would take residents to and from the city center, while a pollution free people mover system would ferry residents around the business and apartment district. A people mover attraction opened at Disneyland the year after Walt’s death, intended to be a prototype for the transportation system that would run in EPCOT. Originally intended as a generic description of the system, PeopleMover eventually became the official name of the attraction.

A similar attraction opened at Magic Kingdom in 1975, named the WEDWay PeopleMover. Jack Wagner, called the “official voice of Disneyland” due to the large number of announcements and voiceovers he recorded throughout the park, was the original voice of Magic Kingdom’s PeopleMover. When Disneyland closed its PeopleMover attraction in 1995, the renamed Tomorrowland Transit Authority became the only remaining example of this piece of technology envisioned by Walt Disney.