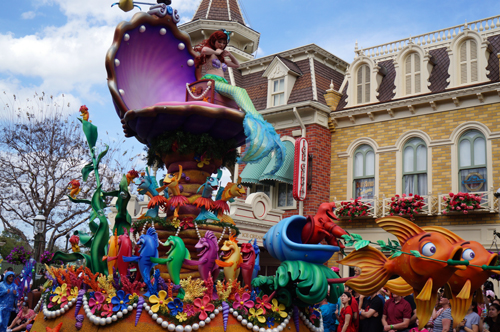 There are several shows throughout the day, especially at Disney’s Magic Kingdom, that have FastPasses. How do you decide whether to use your Tier 1 FP+ reservation on a show instead of an attraction? How will you decide if you’re wasting the reservation?

In order to have a successful Walt Disney World vacation that accomplishes as much as possible in a relatively short timespan, you must plan, plan, and plan some more. Deciding how you will use your FastPasses can make a big difference in how much you get to see and do. Considering the following five things will help you decide how to best use your FP+ reservations.  But first, let’s discuss what shows are available for a FastPass+.

What shows can I use FP+ on?

Disney Festival of Fantasy parade at Disney’s Magic Kingdom starts at 3pm and lasts around 12 minutes from start to finish. Fantasyland characters and stories along with state-of-the-art floats, stilt performers, and pendulums parade down Main Street USA, around the Castle Hub, through Liberty Square, and into Frontierland. If you make a FP+ reservation, the viewing areas are in the Central Plaza, Frontierland, and Town Square with Central Plaza being the best. There are good viewing spots for this show even 30 minutes before the parade starts, but you’ll only get the peace of mind knowing you’ll have a spot if you make a reservation.

Main Street Electrical Parade, also at Magic Kingdom, makes two appearances at 9pm and 11pm when the park is open late. It’s a 20-minute parade that takes the same route as Festival of Fantasy and has the same viewing spots. Much of the above information holds true. Just keep in mind that there will be massive congestion in this area after the first showing as people prepare for Wishes.

Wishes Nighttime Spectacular is Magic Kingdom’s fireworks show. This is probably the most crowded time of the day. If you decide to use your FP+ for this show, you can choose between either side of the Main Street Plaza Garden Viewing Area. If you decide to stand in front of Casey’s Corner, you’ll have an excellent view of Tinker Bell’s entire flight while standing in front of the Plaza Restaurant will mean Tinker Bell flies right overhead. If you choose not to use a FP for this show, you’ll have to find a good viewing spot earlier in the night, but it is not impossible to get a good view.

IllumiNations: Reflections of Earth at Epcot takes place on the World Showcase Lagoon. If you use a FP+ for this popular fireworks show, you’ll be standing at World Showcase Plaza, which is at the entrance of World Showcase from Future World. If you have anyone in your party less than 40” tall, it might be a good idea to use your FP for this show since other Tier 1 FastPasses at Soarin’ and Test Track require riders to be over 40” tall. If everyone in your party is tall enough to ride these two attractions, you might want to consider passing on the FastPass for IllumiNations and get a spot 20-30 minutes before the show. Since viewing spots are available all around the Lagoon, you shouldn’t have a problem getting a good spot.

Finally, Hollywood Studios’ Fantasmic! is not a traditional fireworks show since it takes place in an amphitheater setting. Reserved seating for guests with FastPasses is located to the left of center stage and is a good idea during the busiest times of the year for the first showing at 9pm. However, reserved seating is not necessary for the second showing at 10:30pm. If you don’t mind staying up late, the second show is almost always the better bet.

So now that you know what shows have FastPass+ reservations available, here are the top five things to consider before making a FP+ reservation for these shows.

1. How crowded are the parks?

During the busiest times of the year, wait times for popular rides like Peter Pan in Magic Kingdom or Soarin’ in Epcot can reach and even exceed two hours. If you’re visiting during one of these times, it might be better to make FP+ reservations for these attractions. Although there will be equally large crowds for Fireworks and Shows, fireworks are mostly high enough that you can see them from anywhere. Parades may be a little more difficult to see, but if you have your heart set on seeing the Main Street Electrical Parade, consider the second showing, which usually has a much smaller crowd.

2. What time of day are you visiting?

If you’re a true Disney fan, you know that visiting within the first few hours of the day will lead to many more experiences since the parks are often less crowded at this time. If you can fit this tip into your schedule, visit the busiest attractions during these hours without a FastPass. Take a break in the afternoon when the crowds are at their peak. Then use your FP+ for a show at night.

3. Do you want to get extra FP+ reservations?

Guests can make three FastPass+ reservations prior to visiting the park. However, once you use all three of these FastPasses, you can make additional FastPass reservations. If you decide to use one of your FastPasses for a show, you probably won’t be able to schedule another FP since they will probably all be gone by the time the show is over. The only exception to this would be the Festival of Fantasy Parade since this takes place in the afternoon.

4. Are you park hopping?

If you plan to park hop later in the day just to experience the fireworks show in the second park, then by all means, use a FastPass. Just know that you can only schedule FastPasses for one park a day. You would be best to go to one park in the morning then schedule some FP+ attractions for the second park later in the day and a few hours before the fireworks. Although the crowds will be high, you will be able to get on the rides pretty quickly through the FP line.

5. How many days are you visiting each park?

If you plan to visit the same park for more than two days, I encourage you to use your FastPass for shows one of those days and save the other day for the popular attractions. This is especially helpful if you’re spending two or more days in Magic Kingdom since the most shows take place at Magic Kingdom.

Is it smart to use a FastPass+ reservation on a show or parade?