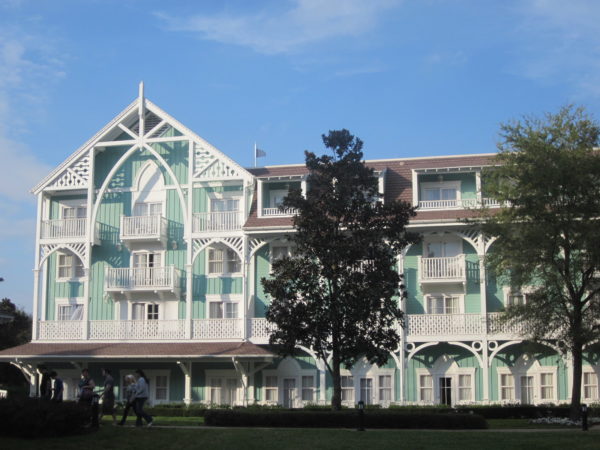 When you’re planning a vacation to Disney World, one of your first decisions to make is where you’re going to stay. Disney resort hotels are divided in Value, Moderate, and Deluxe Resort Hotels with the value being the least expensive and most basic and the deluxe being the most luxurious. Some of the Deluxe Resorts take it one step further and offer Disney Vacation Club Villas.

These villas are technically for members, those who have bought into Disney’s vacation club program

That said, sometimes DVC members can’t use all their points. In this case, they will “rent” their points to non-members via reputable websites. Technically the reservation is made in the member’s name, but you get all of the info for the reservation and it’s yours to use.

If you decide to rent DVC points, you can get a really nice Deluxe Resort for a very reasonable price, but how do you choose which resort to rent points for?

Let’s take a look at what each of the DVC resorts offers.

Disney’s Old Key West Resort was the first DVC resort. It opened in 1991 as The Disney Vacation Club Resort but was renamed in 1996. This resort offers Deluxe Studios, One, Two, and Three-bedroom Grand Villas. The rooms have recently been updated, and the villas are quite large- some larger than the average American home.  A two-bedroom villa can sleep eight comfortably. The grand villas are the most affordable of their kind and can sleep up to 12 people.

The villas all have Jacuzzi tubs in the master bath, and a full-size kitchen. Outside, there’s a drive-up parking spot for those who drive or rent a car. The resort offers a laid-back Florida lifestyle complete with palm trees, pools, volleyball courts, island music, bars serving umbrella drinks, and several good dining options.

This resort feels like summertime. If you want to try out the Florida lifestyle and especially in the summer, this is a great resort to choose!

Disney’s Wilderness Lodge has some of the newest DVC units in Copper Creek. Boulder Ridge Villas welcomed guests for the first time in 2000, but they received an update with the recent renovation too, and they really have a very similar atmosphere.

The whole resort has a rustic, warm, park lodge feel as soon as you walk into the massive lobby. The huge floor to ceiling fireplace hosts wooden rocking chairs alongside a babbling brook. The villas are available in Studio, One, and Two-bedroom units, and they have a late 19th century railroad theme but with modern amenities.

Outside, the resort has some really cool recreation opportunities including Fire Rock Geyser, designed to look like Old Faithful. It shoots water 120 feet in the air every hour on the hour starting at 7am.

Disney’s Wilderness Lodge is great for a winter vacation. Not only does it feel warm and welcoming, but the Christmas decorations here are absolutely gorgeous.

Disney’s Animal Kingdom Lodge‘s DVC villas are located in Kidani Village, which is a separate building from the main Jambo House. There are 300 villas in this building, and Disney expanded the Savanna and added more animals and more species to fill the area.

Units are available in Studio, One, Two, and Three-bedroom Grand Villas. DVC visitors can enjoy their own very fun pool area complete with water slides, but the coolest thing about this resort is the ability to see wildlife anytime you want. You can even sit on your balcony and watch the animals roam free!

As with Disney’s Animal Kingdom, the lodge was built with lots to discover. Explore African culture in the authentic architecture and artifacts, and enjoy some of the highest rated dining on property at Jiko, Boma, and Sanaa. Animal Kingdom Lodge is also known for their concierge service, so if you want or need anything, just ask- it’s worth a shot!

Disney’s Beach Club Resort has a 19th century Northeast Coast theme with calming blue hues. What’s really nice about this resort is its proximity to two of Disney World’s theme parks. It’s within walking distance to both Epcot and Disney’s Hollywood Studios. What’s more, there’s a really nice pool at the resort called Stormalong Bay. It’s the only sand-bottom pool on property, and it’s like having a water park right outside of your hotel room! The water area is situated between the Beach Club Resort and its sister resort, Disney’s Yacht Club Resort. They share amenities and resources, including staff and management, so it’s like getting two resort experiences in one. The Yacht Club has a pronounced nautical theme, which is complimentary but all together different from the Beach theme.

The DVC accommodations are available in Studio, One, and Two-bedroom villas, and there’s some great dining options at the resort and at the nearby Boardwalk entertainment district. You can’t miss Beaches and Cream Soda Shop!

If you’re visiting Disney World during one of Epcot’s festivals including the Food and Wine Festival, the Flower and Garden Festival, or the new Festival of the Arts, this is a great choice because you can walk to Epcot. The convenience can’t be matched!

Disney’s Boardwalk Inn Is just next door to the Beach Club, which means that it’s also very close to Epcot and Hollywood Studios. The whole resort has a 19th Century Atlantic City vibe of carnival days gone by.

The resort is part of an entertainment district called Disney’s BoardWalk with a variety of dining, shopping, and nightlife including Beaches and Cream (famous for the Kitchen Sink Sundae), Jellyrolls, and Atlantic Dance Hall.

There are three pools; the main is one called The Luna Park Pool with a mid-20th century carnival theme. There’s even a Luna Park Crazy House playhouse area for kids. While it accurately depicts the theme, some people find the weird clown a little creepy.

The villas aren’t beach-themed like The Beach Club, but the décor is inspired by seaside areas in the Northeast. There are Deluxe Studio rooms and One and Two bedroom villas.

For easy access to the Epcot Festivals and to the adult playground that is The BoardWalk, choose this resort.

Disney’s Grand Floridian Resort and Spa is a beautiful hotel with a classic Victorian theme. It’s formal and a little opulent, but it still has a relaxed vacation vibe. Cast Members at this hotel know how to cater to guests in a way that makes them feel wealthy and important. They can make wishes come true, but there are also scheduled magical events like Afternoon Tea. If you want to treat your kids like royalty, check out Disney Perfectly Princess Tea. These events, and really the entire resort itself, are just an excuse to dress up and be spoiled for a little while.

The DVC accommodations are available in Deluxe Studios, One, Two, and Three Bedroom Villas, and each category has a standard view and lake view option. These villas opened just five years ago, so they are still new and modern.

The resort has two pools, an arcade, access to watersports, and a full service Senses Spa. Besides the tea times, The Grand Floridian also has one of the most elegant and expensive restaurants on property: Victoria and Albert’s. Finally, The Grand Floridian is right across the lagoon from Magic Kingdom, so you can sit on the white sand beaches and see the Magic Kingdom fireworks and the Electric Water Pageant.

If you want to be right at the middle of everything Disney World, The Grand Floridian is a great choice!

Disney’s Saratoga Springs Resort is another resort that allows guests to feel spoiled. The property is huge, and there are five pools from exciting to relaxing. There are also walkways perfect for long strolls and getting your morning jog in.

Saratoga Springs has deluxe studios, and one, two, and three bedroom villas in very comfortable accommodations. There’s also a very special kind of accommodation here: The Treehouse Villas. These raised treehouses are situated in the wooded areas surrounding Saratoga Springs. They are a bit removed from the rest of the resort, but you can enjoy the beauty of nature without roughing it too much.

This resort is perfect for the golf lover, and it’s also great for a ladies-only weekend getaway. With a full-service spa and easy access to Disney Springs, the girls will love every minute!

Disney’s Polynesian Resort is a Pacific Southwest paradise channeling the cultures of Hawaii, Tahiti, and Fiji in this lush, tropical resort right in the heart of Disney World. It’s actually right next door to The Grand Floridian, sharing the white sand beaches, and across the lagoon from Magic Kingdom making this one of my absolute favorite places on property to watch the fireworks.

The Polynesian is one of Disney’s smaller resort hotels, and it’s also one of the opening day resorts. With not too much space but an opportunity to make this a DVC location, Disney converted some of the traditional hotel rooms into deluxe studio rooms. However, they really outdid themselves by building Bungalows over the water. While you can’t swim in these waters like you can in the real pacific islands, you do walk over a bridge to get to your room.

There are also some really fun activities at this resort like an authentic luau in Spirit of Aloha Dinner Show and a Best Friends Character Breakfast with Lilo, Stitch, and some of your favorite Disney pals dressed in their best Hawaiian shirts.

Disney’s Contemporary Resort is literally right across the street from the front entrance of Magic Kingdom, so this resort gives you a different view of the fireworks even from The Grand and The Poly. What’s more, if you can get to the Top of the World Lounge or, even better, the California Grill, you’ll have some of the best views in all of Disney World.

As the name suggests, the resort is full of modern touches with clean lines, modern furniture, and wide open spaces. One of the most unique features of this resort is that the monorail line runs right through the middle of the main building. If you’re dining at Chef Mickey’s in the morning, just look up; it’s quite a sight to see!

Outside, the resort sits on Bay Lake, so there is a variety of water craft just steps away!

The DVC location here is called Bay Lake Tower. The Tower, which occupies a the space of the former Garden Wing, opened in 2008 and features its own pool, a water play area, a pool bar, a bocce court, and a courtyard. Guests of Bay Lake can use any of the resorts amenities, but those located at Bay Lake are limited to guests of the Tower. The Tower offers a full list of amenities including concierge level services and rightfully so because these units are some of the most expensive in all of the DVC.

The Contemporary is another great option if you want to be right at the center of the excitement and you like to live life with a view. In fact, some of the Bay Lake Tower rooms feature removable partitions so you can watch the fireworks from the bathtub!

Are you a DVC member?  Your favorite resort?