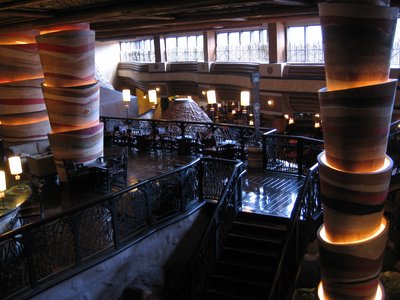 Of all of the ethnic flavors that you, as an American, commonly eat, perhaps the most under-appreciated is African. Maybe it is not even on your radar in terms of flavors. It makes sense when you think about it.  African food isn’t exactly like Chinese Food, which you order when you don’t want to cook dinner. It also is not like Thai or Indian Food, which you get when you have a desire to give your taste buds a fire-y butt-kicking of flavor. Then again, how would you know if you have never had it? A great place to get an introduction the unique taste of African Food is most certainly at a very special and very unique restaurant called Boma, Disney.

Now, you’re thinking that people don’t generally make the trek to Walt Disney World Resort in Orlando, Florida for the food. While this might be true, just because people don’t take a Disney vacation for the food, doesn’t mean that they couldn’t – or even shouldn’t.

So, what exactly does Africa taste like, and will a restaurant at Walt Disney World really be able to capture that flavor authentically? The answer is yes. Walt Disney Dining prides itself on offering a unique dining experience in each and every restaurant on site. In some of their restaurants, that means modern fusion cuisine, but here, at Boma, it means authentic African foods. Even the word, “Boma” comes from a word meaning “enclosure,” in several African languages, including Swahili.

Boma is constructed and decorated to feel like an African marketplace. Earthy tones make up the majority of the color scheme, which is fine because who needs color when you’re watching a chef prepare your food on an open rotisserie heated by wood-burning fires? Canopies, and even faux-shingled roofs adorn the ceiling above the tables, and the buffets as well. Muted carvings make for subtle but satisfying décor. You will especially love this because you can look out the restaurant’s windows and see safari wildlife; it feels like you are eating in a marketplace in Africa. How neat would it be to be able to say, “I ate at this restaurant, and there was a giraffe watching me!”

What Kind of Food Does Boma Serve?

Boma is breakfast and dinner buffet-style foods, inspired by authentic Africa recipes from over 40 countries all over the continent. For breakfast, you can enjoy the full flavor of Kenyan Coffee, as you consume African pastries, corned-beef Bobotie – quiche, and more familiar breakfast foods with just a hint of African zest – eggs, French toast, ham and pork loin. For dinner, Boma offers grilled meats, soups, stews, vegetarian dishes and more. There are over 60 delicious options to choose from each night.

The Banana Bread Pudding with Vanilla Sauce, a specialty dessert, is just to die for. Also on the menu are African cake, custard, and various types of fruit dish available to sample if you desire and if bread pudding is not your thing – though with that vanilla sauce on it, just about anything could become “your thing” pretty quickly.

The most popular dessert at Boma, however, is a little treat called a “Zebra Dome.” Zebra Domes are Kahlua chocolate mousse concoctions so good, that you’ll have to taste them to believe them. So popular and yummy is the Zebra Dome that many guests feel that the trip to Walt Disney World is worth it just for this little treat.

Do I Need A Reservation?

Dining reservations are hit or miss when it comes to Walt Disney World Resort. It is really never a bad idea. It depends, for one, on when you are visiting. For example, if you are staying at Walt Disney World on the weekends, or during a school break, the theme park resort will be extremely busy, making it essential to make reservations – at the very least for dinner, but the making reservations ahead for the other meals would not go amiss.

It is pretty impossible to predict when any of the restaurants will be busy, honestly. Indeed a favorable review of the same restaurant can make it THE hot ticket for that month. Other times, especially if you make it a habit of beating meal rushes, you may find the restaurants to be reasonably empty.

Reservations can be made up to 180 days in advance, so if you are a planner, you could just plot your meal times and locations out 6 months and not have to worry about it, but it is likely some of your plans could change in those 6 months. Special reservations can be made, and are essential to meet the needs of any guest who may have a special dietary needs – whether this be an allergy, gluten-free, vegetarian, vegan or otherwise. Disney prides itself on being able to offer multiple delicious options to suit all of their guests’ tastes and needs. Cakes can also be reserved for special occasions like birthdays, anniversaries, and other celebrations if they are reserved NO LESS than 2 days in advance. The time for reservations is 180 days – 24 hours; not before, and not after.

One of many reasons to visit Walt Disney World Resort in Orlando, Florida is the food. Sure the world’s most visited theme parks, a stay at a luxury resort hotel and general fun under the sun in Orlando, Florida are pulling you as well! But when you’re on vacation, you want tasty treats, and exotic flavors – African being just one of many that will be new, and no doubt delicious, only adding to the overall quality of your Walt Disney World Vacation Experience.