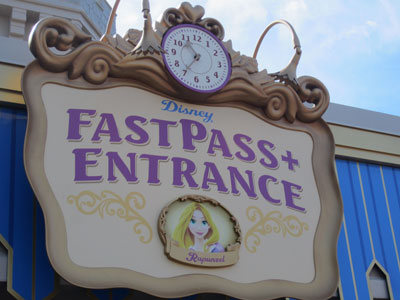 What happens for people who stay at a non-Disney hotel or day visitors passing though, or people with an annual pass?

So far, what we have learned about FastPass+ (or NextGen as the project used to be called) is from the tests that Disney has run. The total pool of testing has been surprisingly big, where nearly 1 million people have tried out FastPass+ in one capacity or another.

Disney’s Animal Kingdom was the first to drop the traditional FastPass system and move over exclusively to FastPass+. They made the switch in mid-December, 2013. Then, on January 14, 2014, the Magic Kingdom dropped the traditional FastPass system. There are no more paper FastPass tickets at either of these parks – only FastPass+ reservations that must be made on the Disney My Magic Plus web site, mobile app, or at kiosk locations in the parks.

There are rumors that Epcot and Disney’s Hollywood Studios will drop paper FastPasses shortly (join in the discussion on the forum about the end of FastPass).

If you are staying at a Disney Resort Hotel, you can make your FastPass+ reservations up to 60 days in advance.

As of now, everyone else must make their FastPass+ reservations when they arrive at the park.

Again the question: What does this mean for guests not staying at a Disney Resort?

Here are the five steps to using FastPass+ for people not staying at a Disney Hotel, with some discoveries tips mixed in for good measure:

1 – Install The My Disney Experience App

Before you arrive at Disney World, install the My Disney Experience app on your smart phone or your tablet. You can find it in the App Stores. Take time to register your information, as well as the information of the rest of your traveling party before you get on property. Even though you can’t yet use the app to make your FastPass+ reservations in advance, you can use it to check out the wait times from prior days and view your current day reservations.

2 – Link Your Ticket To The My Disney Experience App

You must have a plastic, RIFD-enabled ticket in order to use FastPass+. If you have a paper voucher, be sure to exchange it for a plastic ticket at the ticket windows before you enter the park. You must have a plastic ticket to enter the park and also to use FastPass+. Ask a Disney Cast member to associate your ticket with your My Disney Experience App, or you can give it a shot yourself in the app.  Sometimes the app seems to work, and other times it doesn’t.

When you arrive at the park, head to a FastPass+ kiosk location, or look for a Disney Cast Member wearing a FastPass+ shirt (a Mickey head silhouette inside a circle, or the letters “FP+” in a circle).

The current FastPass+ service center locations in the Magic Kingdom include:

Disney Cast members with iPads can help, or you can use the self-service kiosks – although at this time it seems that Disney has stationed an army of Cast Members to provide personalized help.

If you have the app loaded on your phone or tablet (remember step 1 above?), you can see your reservations there assuming the technology cooperates. Otherwise, you may want to take a photo of your reservation on the kiosk or the Cast Member’s iPad or even write down your reservations times if you are the old-fashioned type.

5 – Use Your FastPass+ Reservation – Maybe

When you arrive at the attraction for your reservation, be sure to check the standby wait time. If the standby time is short, you may not want to use up one of your three precious FastPass+ reservations! Instead, if it is convenient, find a Cast Member to help you change your current reservation for another one. Be sure to do this before you tap your ticket to the FastPass+ / Mickey Head reader and therefore kiss your reservation goodbye.

Do Reservations Run Out?

So far, sources report that even popular attractions like Big Thunder Mountain still have available FastPass+ reservations late in the day. My personal experience is different.  I showed up at the Magic Kingdom late in the day, about three hours before closing, and there were no more reservations available for Space Mountain and Big Thunder Mountain. At this point in the testing process it is hard to say if Disney is allocating reservations throughout the day, or just opening up all the slots at once.

What About Late Arrival?

Officially, the FastPass+ program is still in a test and adjust phase. All of the above items could change, but as time goes on, we learn more and more about how the system might work.