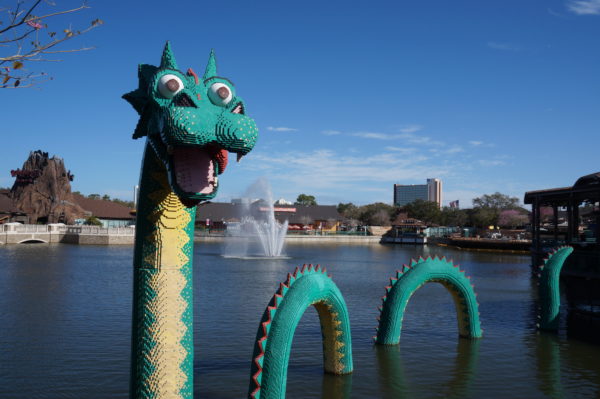 Lego Store dragon in the water

Disney’s Animal Kingdom was the fourth park built in Disney World. When it opened on Earth Day in 1998, it was the largest single Disney park in the world at around 500 acres. Disney Imagineerss had big plans for this park, and the planning started almost 10 years earlier.

In 1993, guests surveyed said they would really like to see dragons and unicorns in a Disney theme park.

Imagineers first started on an area that was to be called Beastly Kingdom, which was a section devoted to myth and fantasy with make-believe animals based on legends, fairytales, and storybooks. The land would be divided into two sections: Good and Evil.

They were given $250,000 to get started, but with the care and maintenance of the real animals, they quickly ran out of money. They were given a choice between Dinoland and Beastly Kingdom, and since Disney already had so much invested in the animated feature “Dinosaur” (2000), Eisner made an executive decision to focus on Dinoland. As a result, the fanciful Beastly Kingdom was postponed with a planned completion date of 2003.

Once the park opened, Disney realized that the attendance wouldn’t grow enough to justify the expense of adding this land. Beastly Kingdom isn’t the only thing that was cut though; 75 acres were eliminated from the Africa section. To fill space and add activities for the guests that did fill the park, Eisner called for Camp Minnie-Mickey to be created (after recalling that Mickey’s Birthdayland was built in Magic Kingdom just 90 days) providing character meet and greets and two temporary shows- The Legend of the Lion King and Pocahontas and her Forest Friends. This was a quick and inexpensive way to provide entertainment for guests who were expecting more since Disney had already announced the elaborate land.

Still, when Eisner dedicated the park on April 22nd, 1998, he read the plaque that said, “Welcome to the kingdom of animals… real, ancient, and imagined: a kingdom ruled by lions, dinosaurs, and dragons…”

Let’s take a look at five attractions that were supposed to follow this theme but were never developed in Animal Kingdom.

Fantasia Gardens was advertised in the marketing materials of Disney’s Animal Kingdom. It would be built in the Good Realm, and the area would have Greek architecture with temples and a replica of Mount Olympus plus a rainbow archway, beautiful gardens, and impressive fountains.

One attraction in the area was to be a musical boat ride inspired by the hit movie Fantasia with Sorcerer Mickey. It would be designed a lot like “it’s a small world” in Magic Kingdom’s Fantasyland.

2. Quest of the Unicorn

Another Good Realm attraction was a direct result of the survey completed in 1993 in which guests requested an attraction with a unicorn.

Quest of the Unicorn would be an interactive walk-through where guests would be challenged to find and awaken five golden idols in a garden maze. Each idol would provide part of a code that you would use to unlock the far end of the maze where you would find and encounter an audio-animatronic unicorn in a secluded grotto amidst crystal waterfalls.

One important part of Disney World is the dining, so Disney conceived a waterfront restaurant based on the legend of the Loch Ness Monster.

Now, you might be thinking about the Lego Nessie in Disney Springs, but this monster would be large and threatening. As you dined, Nessie, an audio-animatronic sea serpent would occasionally rise from the water and take a look around. This restaurant would be located in the Bad or Evil Realm of Beastly Kingdom.

Dragon’s Tower was another Bad Realm attraction, and this was designed as a thrilling roller coaster that would have probably been an E-ticket attraction.

Dragon’s Tower would have been housed in a castle ruins where, after a fearsome battle that devastated the original inhabitants, a massive dragon has made his home. The dragon was to be the largest and most sophisticated audio-animatronic to date.

Upon boarding, guests would be strapped into a suspended, inverted roller coaster that gave the illusion of flying. Early on, a colony of bats would whisper to you trying to convince you to steal the dragon’s jewels. This, of course, would make the dragon angry. After soaring through collapsing corridors, you would confront the fire-breathing dragon that obviously wanted his bounty back.

The Discovery River Boats was a real attraction in Animal Kingdom that resembled Magic Kingdom’s Jungle Cruise. It was an opening day attraction, but it only survived just over a year.

The boats were docked in Asia, and the boats traveled by the Tree of Life and through all of the lands in the park. The Captain would walk the aisles showcasing small animals on board and pointing out other notable items throughout the ride. One such point of interest was a fire blow from a cave on the river. This was supposed to be a fire-breathing dragon head, but when cuts needed to be made, Imagineers decided to use just fire. The Kraken and a White unicorn with a gold horn were also supposed to be on the route, but they were never added.

When the attraction closed, the fire function was turned off, but the cave could be seen from Camp Minnie-Mickey, which is now Pandora. The boats are still on property in a backstage maintenance dock behind Primeval Whirl, and the docks are now used as a prop for character meet and greets.

Beastly Kingdom vs. Pandora: Which would you prefer?