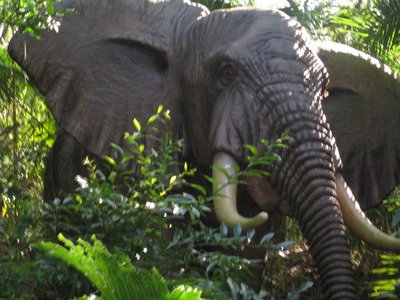 The Jungle Cruise attraction, located in Adventureland, takes guests on a safari boat tour through four different continents, encountering a variety of plant and animal species along the way.

The theme of the ride is a 1930s British river touring companion the Amazon River, named the Jungle Navigation Company. Guests board replicas of 1930s tramp steamer boats to travel down the Amazon River of South America, the Congo River of Africa, and the Mekog River of Asia.

Like many attractions at Magic Kingdom, the queue area for the Jungle Cruise is themed to resemble the rest of the ride. Riders enter a river outpost on the Amazon complete with an advertising poster for the Jungle Navigation Company. As the line twists and turns, it passes numerous period artifacts, tools and safari gear, and photos from previous expeditions. The queue even includes broadcasts from fictional Depression-era disc jockey Albert AWOL, with period appropriate news, weather reports, and music.

To add to the feeling of adventure, reports can be heard of hippo attacks, tribal disputes, and other potential dangers awaiting downriver. A lunch menu advertises such delicacies as barbecued three-toed sloth, and a chalkboard lists the names of missing persons and boats (has anyone seen Run Aground Sue?)

There are 15 total boats associated with the Jungle Cruise attraction, each with fun river-inspired names such as Irawaddy Irma or Zambezi Zelda. Each boat can hold around 20 guests at a time, and is piloted by a skipper who narrates the journey. The ride is entirely outdoors, but a canvas roof on each of the boats does provide a bit of relief from the sun.

Much of the fun on the Jungle Cruise ride comes from the skippers, who provide humorous narration throughout the cruise. The attraction was originally treated very seriously, with detailed information about the jungle river environments such as one might expect from a nature documentary. As the ride aged, Disney recognized the need to update the attraction without changing its essential nature. As a result, the animatronic scenes of the ride have remained the same throughout the years, but a goofy pun-filled script performed by Disney cast members now accompanies the journey.  You also get an occasional comedic ad-lib.

These skippers occasionally provide genuine information about the environment and animals, but mostly fill the tour with good-natured, family-friendly humor. Watch out for the genus of butterfly known as plasticus mechanicus, or the clever gorillas who managed to get an abandoned jeep’s engine to turn over.

Taking off down the Amazon River, the boats first pass several large species of butterfly fluttering around Inspiration Falls. These falls are named because they inspire you to go…further down the river. Where you enter the Congo River and encounter an abandoned pygmy village whose visitors fled from a visiting python. Further down the river a camp is being raided by a troop of gorillas, and then the boats transition on the long Nile River.

First to be spotted on the Nile are a couple of enormous African bull elephants threatening each other from opposite sides of the river. Passing through the African veldt, riders can see a pride of lions feasting on a zebra. Next up is an unlucky safari group chased up a tree by a rhinoceros, and hyenas laugh at them from the opposite bank. The boats then pass Schweitzer Falls and some hippos enjoying a swim; the hippos threaten the boat until the skipper scares them away with a (fake) gunshot. The last stop in Africa is an ambush by a native tribe, but the boats are able to slip away and enter the Mekong River.

The boats pass through an ancient temple filled with tigers, cobras, and baboons, and they outside to where a group of Indian Elephants are playing in the water by the temple. The elephants spray at the boat and only just miss the passengers.

Magic Kingdom’s Jungle Cruise is based on a very similar ride that opened with Disneyland in 1955. It was inspired by a series of short documentary films by Disney called True-Life Adventures.  Walt Disney originally hoped to use real animals in the attraction. However, he would eventually be convinced to use audio animatronic animals instead.

Although the modern-day Jungle Cruise is not quite the thrilling adventure that Walt Disney once envisioned, it is still one of the most beloved and enduring rides in Adventureland. The different personalities of the skippers help to make the ride a little different each time, and it is a great place to see Disney poke a bit of fun at itself.