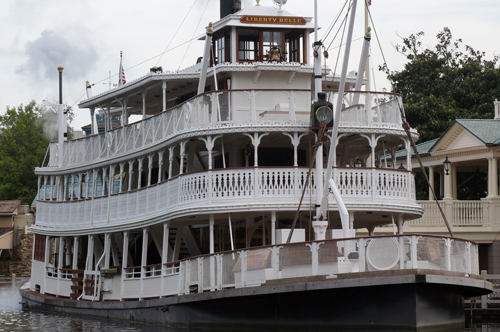 History of the Liberty Belle Steamboat in the Magic Kingdom

It’s no secret that Walt Disney, the man, loved all kinds of transportation. The Magic Kingdom’s Liberty Square Steamboat attraction did not open on the first day, but it did sail for the first time on the second day of the park on October 2, 1971.

This Mississippi Steamboat replica takes guests on a 17-minute ride guided on an I-beam that is buried under the green and brown dyed water. The ride operator sits on the upper deck and is responsible for blowing the whistle, ringing the bell, and prompting the narration that accompanies the cruise on the Rivers of America.

An engineer, who controls the speed, is situated on the lower deck.

The boat cannot be steered, but it is propelled by the large paddle system on the rear of the boat, which is powered by an on-board steam engine. On the current ride, guests will hear narration as they pass by sites in Frontierland, Tom Sawyer Island, and Liberty Square.

The Liberty Belle hasn’t always been the only ship in town, though.

The Admiral Joe Fowler was the first ship to sail the Rivers of America. Its namesake is a retired Navy Admiral who oversaw the ship’s construction at the Tampa Ship Repairs and Dry Dock Company.

The Richard F. Irvine ship took six months to build on Walt Disney World property and was commissioned in 1973, just two years after the Fowler. For seven years, both boats ran together to accommodate the number of guests who wished to ride.

The Irvine was named after the Disney set designer with the same name. He also served as a liaison between the architectural firm and Disney Imagineers during the construction of Disneyland and oversaw the planning and design of Walt Disney World.

When the Fowler and the Irvine first sailed, few other attractions existed. What would later become Tom Sawyer Island was undeveloped, and Splash Mountain and Big Thunder Mountain were not yet built. Since there was little to look at outside, Disney provided on-board musical entertainment inside.

Also, the ships were originally loaded on the second deck and unloaded on the lower deck. This allowed guests to load and unload simultaneously to accommodate the huge crowds. When the demand decreased, the need for this two-tier boarding system was eliminated.

Both ships ran together for seven years. The Fowler was removed in 1980 for repairs and never returned. No official announcement was ever made, but many suspect that the hull was cracked either in moving or once in the dry dock. Parts of the ship were recycled though. The machinery was sent to Tokyo Disneyland, and guests can hear the whistle on the #4 Train Engine named Roy O. Disney.

In 1996, the Irvine was moved to a dry dock backstage. Although both of the original ships have been removed, these important names are not forgotten. Two of the ferries that run between the Ticketing and Transportation Center and the Magic Kingdom feature the names Irvine and Fowler.

Just a short time later, the Irvine was rechristened as the Liberty Belle. This new ship was retrofitted with vinyl and steel making it even stronger.

The Liberty Belle is a 3-tier paddle steamboat that can carry up to 450 passengers that sails from Liberty Square. The narration is done by a young man named Sam Clemens who is on his 100th journey on the Rivers of America. He tells riders stories of attractions as they pass by including the history behind Big Thunder Mountain Railroad, an unidentified Indian village, Cutthroat Corner where pirates are likely to be seen, and the Haunted Mansion, which is said to be built on an Indian Burial Ground where 999 ghosts haunt the area. Finally, both Sam and the captain bid farewell as the boat approaches the docks.

Do you ride the Liberty Square Steamboat in the Magic Kingdom?
Leave your comments below.