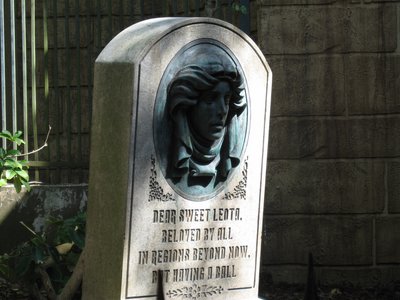 The Meaning Behind The Haunted Mansion Tombstones

The inscription on each tombstone is funny, but did you know that each of the 13 tombstones actually honors a Disney employee who contributed to the development of the Haunted Mansion?  Let’s take a look at each of the people behind the tombstones – their contributions to Disney and their tombstone tribute.

The most recent addition is also one of the largest.  The tombstone includes the face of a women whose eyes actually open and close.  This is a tribute Disney artist Leota Tombs, who worked in WED Enterprises – which is what we all now know as Disney Imagineering.  Madame Letoa’s head in the one that appears in the séance room.  Leota actually sat in as a model for the séance scene crystal ball during its development.  Originally she was supposed to only help out with a test, but everyone liked her performance and the effect so much that her image in the test was actually used as the final version in the ride.  It is her face you see inside the crystal ball.

Some people believe that Master Gracey is a character in the Haunted Mansion story, but this tribute actually honors Disney Imagineer Yale Gracey. Yale worked on the development on Pinocchio, and went on to work in lighting projects at Disney Imagineering. Gracey is credited with developing the fake fire special effects in the Pirates Of The Caribbean.

Fred was a model builder for Disney theme parks and movies.  He was one of the original model builders for Disneyland.  Fred was very good a creating realistic rock formations.

Bob was a model artist who managed the development of many classic Disneyland attractions in the early days of that park.

Claude joined Disney in 1935 as a background painter.  Much of his work can be seen in the background of many animated Disney classics.  He worked on many attractions at Disneyland, the Disney World Magic Kingdom, and Epcot.

Bill helped Walt himself with the development of Disneyland.   He eventually became a Vice President with Disney and was involved in development the master plan for the Magic Kingdom at Disney World.

Marc stared his career at Disney as an animator for Snow White.  He eventually worked for Disney Imagineering on attractions like Pirates of the Caribbean and The Jungle Cruise.  He retired from Disney in 1978 but continued to work on projects with the company until his passing in 2000.

Cliff was an architect who worked on much of the design for The Haunted Mansion. 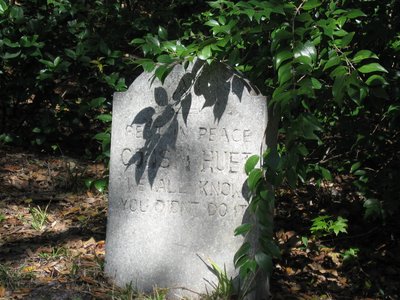 Wathel worked as an artist in the original Disney model shop.  He as a sculptor and worked on many Disney classic animated films.  He worked on “Project Little Man” which was the first project that lead to audioanimatronics.  He continued to work on animatronic projects for many years, including work on Great Moments with Mr. Lincoln as well as the first walking animatronic – Ben Franklin in the American Adventure in Epcot.  He became a Disney Legend in 1995.

Chuck was an art director who work on The Haunted Mansion and other Disney park attractions.  He was involved in creating the master plan for Disney World.

Dave was an artist and model maker.  He was involved in attractions ranging from 20,000 Leagues Under The Sea to The Haunted Mansion.

His tombstone tribute reads:  “Dear departed brother Dave, he chased a bear into a cave”

Xavier, also known as “X”, started he career with Disney in 1938.  He eventually worked for Disney Imagineering, where he co-wrote the song “Grim Grinning Ghosts” for The Haunted Mansion and also wrote the catchy song “Yo Ho, Yo Ho, A Pirate’s Life for Me” for The Pirates Of The Caribbean.  He also worked on attractions such as Spaceship Earth and the Mexico Pavilion in Epcot.  Xavier was also credited with writing most all of the clever tombstone tribute lines that appear in the Haunted Mansion graveyard.  He was inducted as a Disney Legend in 1996.