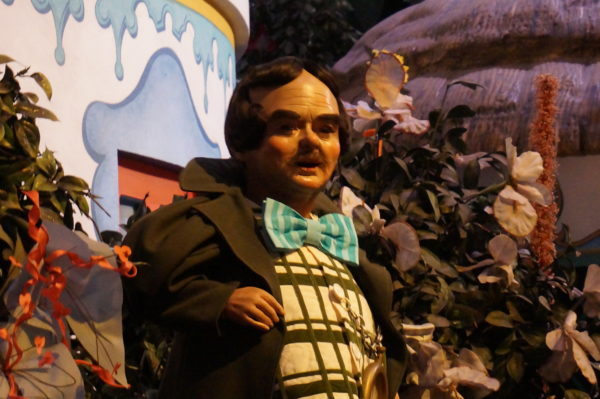 The Great Movie Ride - by TCM

Yesterday we looked at the history of audio-animatronics, a trademark owned by Disney to describe robotics used in shows and attractions in the Disney Parks. Today we’re going to talk about retired audio-animatronics.

Each one was removed for different reasons, and they’re all remembered fondly for reasons that might be even more individual.

When MGM-Studios, now Disney’s Hollywood Studios, opened, the goal was to make it a working movie studio on the east coast. The Great Movie Ride was a direct inspiration of this goal and was a mainstay in the parks until it closed pretty abruptly and to the surprise of many long-time fans on August 13th, 2017. The closure took place after the sponsor, Turner Classic Movies, did not renew their contract; it was announced at the 2017 D23 Expo.

During the ride’s 28-year run, 59 audio-animatronics recreated scenes of 12 different classic movies including Singin’ in the Rain, Mary Poppins, Raiders of the Lost Ark, Casablanca, Fantasia, and Wizard of Oz. These AAs had very fluid and realistic movements compared to their predecessors and made the scenes look very real.

Stitchy’s Great Escape may only officially be “temporarily closed” at the time of this writing, but it’s very likely that the attraction is on its way out.

Stitch replaced ExtraTERRORestrial, which was considered a very scary attraction, and Stitch’s Great Escape was also considered too scary for younger children and even some tweens. The ride had 4D effects in an enclosed space, and even some adults refused to visit. Stitch was the first audio-animatronic to spit at guests, and this was one of the complaints of those who didn’t like the attraction.

Stitch’s Great Escape is technically still open seasonally to increase capacity of the parks during very busy times, but rumor has it that the attraction will eventually be removed and replaced.

Toy Story Mania is one of the most popular rides in all of Disney World, which is obvious in the construction of the new Toy Story Land and adding a third track to the ride.

But not all the talk about this attraction is the ride itself. The queue is a show of its own with an audio-animatronic Mr. Potato Head that is so advanced that it can move its lips in lifelike motions, remove and reattach his own ear, and look directly at a particular guest while conversing with them. He also has more lines of dialogue that any AA ever created, which also required more programming hours than any AA before.

He was hugely popular, but he had to be removed to make enough room for the new track.

However, there is good news!   Mr. Potato Head returned from retirement.  Disney brought him back with the opening of the new Toy Story Land entrance.

Ellen’s Energy Adventure in Epcot‘s Universe Of Energy pavilion in Future World showed Ellen Degeneres’s dream sequence during which she was part of a Jeopardy game against her old archrival. An audio-animatronics of Ellen was joined by audio-animatronic dinosaurs of all different kinds to teach Ellen how energy is made. The AA total for the pavilion was 26 before it closed on August 13th, 2017, the same day as The Great Movie Ride. Its closure was also announced at D23.

The existing pavilion is being turned into the indoor queue for a new Guardians of the Galaxy attraction.  We haven’t gotten a look inside this new attraction yet, but we can assume that Disney will create more audio-animatronics for the show.

Maelstrom, which translates as a powerful whirlpool in the sea, was a dark boat ride in World Showcase’s Norway pavilion. The name is appropriate because guests were swept up in a storm in a Norwegian boat on their way through a brief history of the country. The boat took riders past audio-animatronic trolls who were angered by the boat’s passing and cast a spell on it creating a storm that forced the boat backwards.

The attraction was a lot of fun, but some insisted that it didn’t accurately depict the current state of Norway – especially with an outdated movie.

Maelstrom was replaced with Frozen Ever After, a Frozen-themed attraction.

Kilimanjaro Safaris in Disney’s Animal Kingdom is known for its live animals and jovial safari guides, but not too long ago there was an audio-animatronic in the attraction called Little Red. The story was that safari visitors were on a mission to scare off the poachers and save Little Red. It was a fun story, but in 2012, Disney decided to upgrade the attraction to one focuses solely on live animals, their natural habitats, and conservation of these animals in the wild.

Little Red was removed in the fall of 2012 without interrupting the ride itself. The story quietly changed, and Disney added more live animals including zebras around a new watering hole.

Today, guests can see the focus on conservation as Disney has introduced several babies to the savanna adding numbers to endangered species.

What retired Disney World audio-animatronic to you miss the most?