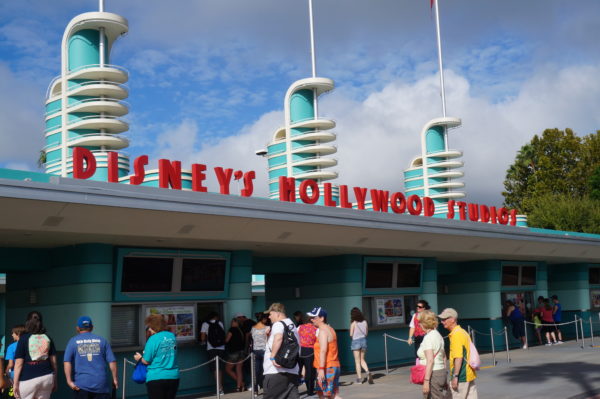 Every Disney World Theme Park Is Getting A New Entrance Experience

Disney World has been undergoing some major renovations lately. It really started with the new Fantasyland update in 2012, the Pandora addition in 2017, the Toy Story Land addition in 2018 and Star Wars expansion later this year. The Epcot update is expected by 2021.

Part of those major renovations include whole-park updates especially at Disney’s Hollywood Studios. Soon, all arriving guests will notice the change before even entering the parks!

Disney is now updating all four theme park entrances both aesthetically and practically. They have a long-term goal to improve security by placing major transit systems behind checkpoints.

Let’s break it down and look at what each entrance will look like!

We’ll start with Disney’s Hollywood Studios because the new entrance is nearly complete. The whole transportation area has been updated with new bus drop off and pick up locations, new restrooms, and new signage. The Skyliner structures are also now up and being tested, and this transportation system will be open soon. This addition has totally altered the look of Hollywood Studios’ entrance. There are also new structures to provide shade from the often-intense Florida sun plus stainless-steel fans to provide some relief from the heat.  You will also find new illuminated signs to help you navigate at night.

The new entrance is not only a better configuration, but it also supports the theme and vibe of the park. With the Skyliner coming in overhead and the teal and red signage, the Hollywood feel is ever more present.

The biggest change at Magic Kingdom will only be seen by those driving to the park. The parking lot is already one of the biggest in the world, but an 11-acre expansion confirms that designation. Those riding the monorail will notice new lanes and walkways from the Transportation and Ticket Center. If you’re using Disney’s Minnie Vans powered by Lyft, you will appreciate new passenger vehicle-sized parking spots added to the drop off area. Everyone will notice a change to the entrance experience because Disney will be removing the multiple shelters, railings, and planters and streamlining the look and process of going through security.

Disney will also be removing the Walk Around the World bricks from the entrance walkways and replacing them with regular bricks. Many people probably walk over this bricks and never notice that they actually say things, so it won’t alter the actual look of the entrance, but it will likely be noticed when they’re removed.

Disney has just recently filed permits and plans to update the entrance in Disney’s Animal Kingdom. Plans include a “proposed building”, which is likely a shade structure, and new hardscape. They’re also moving the tram drop off.

Outside of Animal Kingdom, World Drive receive some updates in the way of a new overpass and extensive road work from Floridian Way to the Car Care Center. This road leads to Western Way, which connects State Route 429 to Animal Kingdom and extends to Flamingo Crossings, which is home to several off-property hotels and will soon be the location for Disney College Program Housing.

Plans for Epcot’s main entrance makeover are less about going forward and more about rewinding to what once was. Plans include more green space and a fountain, both of which are inspired by the original park entrance. To accomplish this, Disney will remove the Leave a Legacy photo plaques and move them to outside of the park entrance near the security checkpoints. Leave a Legacy photos, according to the contract, must be on display until at least 2027. However, the photos themselves are actually only on plaques of metal, so the giant stone monoliths they’re attached to will likely be removed completely.

Outside of the park, Disney says they will improve the security and front gate. Few people realize that there are two security checkpoints (one on either side of the monorail steps), so the one closest to the bus drop off is often much busier than the other side. Overall, the changes will improve how crowds are controlled both outside and inside the park.

Epcot is the only park that has two entrances, so I would be remiss if I didn’t talk about the changes going on at the International Gateway, which is used mostly by guests of the Epcot Area Resorts, including Disney’s Yacht Club Resort, Disney’s Beach Club Resort, Disney’s Boardwalk Inn, and Disney World’s Swan and Dolphin Resorts. The international Gateway will be one of the stops on the Disney Skyliner route. Guests entering through this gate will notice the Skyliner cabins running overhead and the loading/unloading station on the ground, as well as a new security checkpoint.

Excited to see new entrances at every Disney World park?