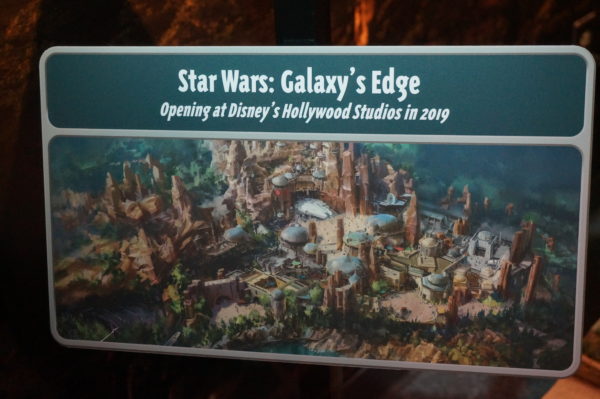 Disney World is no stranger to crowds, and they know that crowds will explode when any new area opens. When Star Wars: Galaxy’s Edge opens in Disney’s Hollywood Studios this fall, you can bet that there will be throngs of people.

But it seems like Disney has learned from previous grand openings, and they’re preparing like never before.

Sure, Disney has raised ticket prices over time to curb the crowds. They might also extend park hours or offer exclusive visiting hours to Annual Passholders, Disney Vacation Club Members, and others who are willing to pay a premium to see the new land.

They’re not saying exactly what business strategies they will take, but they’ve actually built crowd-management right into the new land!

Walt Disney Imagineers have used elevation changes within Galaxy’s Edge to allow viewing of key points even while the 14-acre addition is absolutely packed. They’re raising sight lights above crowd level and lowering areas where crowds will gather. This separation will allow for optimal viewing regardless of your location or height (except maybe for those who are very vertically challenged). This creates an “overlook” effect for some of the most important parts of Galaxy’s Edge.

Disney’s Hollywood Studios is Disney World’s second smallest park, but it has the lowest capacity among attractions. At 135 acres total, it’s smaller only than Magic Kingdom, which has many more rides and attractions. When you consider that Galaxy’s Edge will have two of the park’s E-ticket attractions, you can only imagine how long the lines are going to be for these rides including Rise of Resistance and Millennium Flacon: Smugglers Run.

Experts say to expect Christmas-level crowds all year for at least a year after the area opens. They also say that guests could wait 10 hours just to enter the park and another three to four hours or more to ride either of the above-mentioned attractions. They add that it won’t be uncommon to wait six hours or more during the busiest days.

How do they know this? Its already happened at Flight of Passage in Disney’s Animal Kingdom’s Pandora: The World of Avatar, which opened about a year and a half ago.

Disney has already reported increased attendance and revenue, but insiders say attendance could increase another 30% by the year 2020.

Disney knows that guests are frustrated with the crowds, which is why they’ve building in these elevation changes. In fact, Scott Trowbridge, a leader for the Star Wars project, said, “If it gets to the point where it’s no longer fun, are we really serving our goal?”

There have also been rumors of charging for FastPasses for Galaxy’s Edge, but there is no official word from Disney on this.  Fans would surely complain, but they likely would also pay up – and help Disney manage the crowd levels more effectively.

Will you battle the crowds to see Star Wars: Galaxy’s Edge?