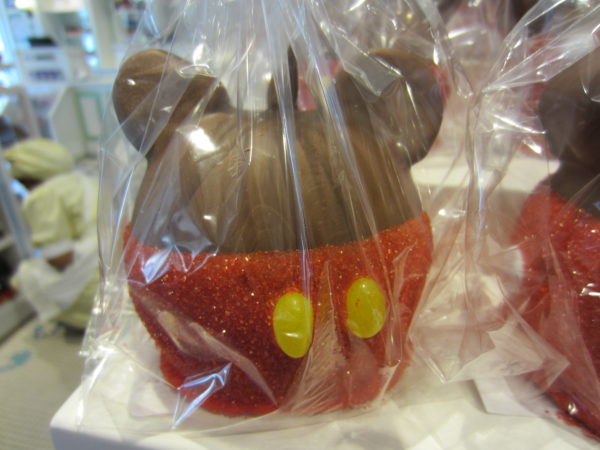 Food is a big deal in Disney World. The chefs in Disney’s Flavor Lab work very hard to design delicious and beautiful dishes that take us one step further out of real life and into the magic of Disney World.

Some of the cutest foods they’ve ever created a shaped like the most famous mouse in the world – Mickey Mouse of course!

While the offerings change frequently, let’s take a look at some of the top 25 Mickey Mouse-shaped foods in Disney World!

Pretty much anywhere you go in Disney World, you can find pretzels. Sometimes they’re shaped like regular pretzels, but many place sell Mickey-shaped pretzels! One of the best places to find these is Anaheim Produce in Disney’s Hollywood Studios. There’s nothing better than strolling down Sunset Boulevard, dipping your pretzel in zesty cheese sauce, and enjoying the beautiful weather!

Disney recently released a new popcorn bucket that is shaped like Mickey! This new design even comes with a strap for easy carrying. Popcorn and these souvenir buckets are available at snack stands all over Disney World.

Rice Krispie Treats are a favorite childhood treat, and Disney makes many version of it all shaped like Mickey! Some are plain, some are dipped in chocolate, some are covered in sprinkles, and more. There are so many different designs for these favorite snacks!

These snacks are also available at several locations in Disney World, but my favorite place to get them is at the Main Street Confectionary on Main Street USA in Magic Kingdom partly because I love to watch them being made right in front of me!

Mickey Waffles are a staple in Disney World for breakfast. You can find them just about anywhere from Value Resort food courts to fancy Deluxe Resort Character Breakfasts. It’s hard to tell what makes them so good; perhaps it’s a little pixie dust or maybe it’s just because they’re shaped like Mickey!

Disney likes to take things to extremes, and the Mickey Waffle isn’t any different. The waffles served at the restaurants are small- about the size of a small hand or a large palm.

If you head over to Sleepy Hollow Refreshments in Magic Kingdom’s Fantasyland, you can get a Jumbo Mickey Waffle the size of a plate! It’s covered in strawberries and topped with whipped cream.

The 50s Prime Time Café in Disney’s Hollywood Studios is a very unique place. Obviously the them is the 1950s, but the décor, the waitresses, and even the television sets all make you feel like you’ve stepped back in time. The menu includes homemade favorites include Chicken Pot Pie. The version on the kids’ menu has Mickey-shaped puff pastries! It’s not an adult-size portion, but you could order off the kids menu or order a double portion!

A newer snack that has gained popularity is the Cake Pop. They aren’t as prevalent as other snacks, but I see them regularly in Starbucks and at the Main Street Confectionary.

They’re often elaborately decorated, dipped in chocolate then covered in sprinkles, drizzled in white chocolate, or rolled in nuts.

Disney sells many food items that you can take home with you as a souvenir, and one of them is Mickey Mouse-shaped pasta. It’s sold in bags in several gift stores, but you can also buy it as part of the Turkey Marinara dish at Pizzafari in Disney’s Animal Kingdom!

There are several VIP opportunities in Disney World, and one of them includes the Mickey Mousse Cake at Amorette’s Patisserie in Disney Springs. You can make your own cake, which is chocolate chiffon cake with dark chocolate and white mousse and either buttercream or fruit jelly filling. If you don’t want to make your own, you can also just buy one right in the store.

The Mickey Ice Cream Bar is probably the most recognizable snack in Disney World. This premium ice cream bar is vanilla ice cream dipped in hard milk chocolate. You can find them just about anywhere in Disney World; they’re almost as prevalent as garbage cans!

If you want ice cream and a cookie, try out the Mickey ice cream sandwich. It’s the same vanilla ice cream in the bar, but it’s sandwiched between two chocolate cookie cakes. These can be found anywhere that the bars can be found!

If you’re not interested in a bar or sandwich, check out the ice cream sundae at Tamu Tamu Refreshments in Disney’s Animal Kingdom. This is a great option for hot summer days because it doesn’t melt and drip all over the place like a cone does!

A very basic but delicious Mickey-shaped is the iced sugar cookie. These come in a variety of colors and themes from “normal” park days to holidays. Sometimes they’re chocolate dipped. Sometimes there’s a design. Sometimes they have sprinkles and other embellishments. They’re always delicious! The Main Street Confectionary has the best variety of cookies, so be sure to stop here and pick up this great treat!

Cupcakes are a staple in Disney World, and they can literally be found in some form or another in almost every Disney eatery from counter-service dining locations to full-service table dining restaurants.

Like the cookies, they come in a variety of designs based on where they are found. Sometimes the Mickey shape can be found on the outside, and sometimes Disney bakes it right into the batter of the cupcake!

It might sound weird to say that coffee can be in a shape, but Joffrey’s Coffee in Disney Springs pulls it off quite well. It’s not actually the coffee that is shaped like Mickey, but they put a Minnie Mouse shape in the foam!

It’s not only Joffrey’s that can make a Mickey design. You can also get a Mickey shape in your cappuccino at the Grand Floridian Café at Disney’s Grand Floridian Resort and Spa. It’s not quite a fancy as the Minnie at Joffrey’s, but it is pretty cute.

You can find cinnamon rolls in many places around Disney World, but the Mickey-shaped cinnamon rolls can only be found at Starbucks. It’s like having breakfast all day long! They’re also really big- large enough to share if you want to!

The Disney resort hotels are a great place to find Mickey-shaped treats too. Head on over to Disney’s Port Orleans Resort in the French Quarter to the Sassagoula Floatworks and Food Factory and pick up a pecan praline. This snack combines sweet, salty, and savory into one delicious nutty snack. Even if you’re not staying here, it’s worth the trip!

Candy apples, like the cookies, come in a variety of everyday designs plus holiday designs. No matter what they look like, though, they all combine fresh, nutritious apples with caramel, chocolate, and special toppings like M&Ms, nuts, sprinkles, glitter, and more. Plus, the ears are made of marshmallows!  It is like a work of art.

These chocolate apples are available all over the parks and in Disney Springs. Main Street Confectionary, Goofy’s Candy Co., and Disney’s Candy Cauldron are great places to buy apples and also to see them being made!

If you happen to be in Epcot, take a walk through the France pavilion in World Showcase. L’Artisan Des Glaces has refreshing French ice cream, and each of the flavors displayed in the case has a hidden Mickey located just at the front of the dish. I bet if you ask nicely, the Cast Member can put your ice cream in your dish in the same tri-circle shape!

Disney’s cupcakes are cute and all, but the Rose Gold Cupcakes at the Boardwalk Bakery near Disney’s Boardwalk Inn are in a category of themselves. These trendy, beautiful, and tasty sweet treats technically only come in Minnie Mouse shapes, but we’re going to count it.

The classic shape is topped with a chocolate bow, rounded with marshmallows, and topped with rose gold pearls. Sometimes the pearls are even in a Mickey shape!

Disney sells lollipops in several different gift shop locations and at the Main Street Confectionary. They’re a simple, sweet, and long-lasting treat, and they also make great souvenirs to take home for yourself or as a gift!

The Sassagoula Floatworks and Food Factory, mentioned above, is also home to the chocolate covered brownie. It’s a chocolate brownie dipped in chocolate, and it’s great for – surprise – chocolate lovers!

If a basic chocolate bar is what you’re craving, head over to the Ganachery in Disney Springs where you’ll find a chocolate bar on a stick with features of both Mickey and Minnie.

The chocolate pops are in rectangle shape with Mickey and Minnie’s shoes, Mickey’s pants or Minnie’s skirt, and Mickey’s head-shape or Minnie’s bow. They’re so cute, and they’ll satisfy your chocolate craving!

Are you celebrating something special? Check out the rice krispie cookie cake at Goofy’s Candy Co. in Disney Springs. This giant cake is made entirely of rice krispies, and icing completes the Mickey design. At $50 each, the occasion better be pretty special!