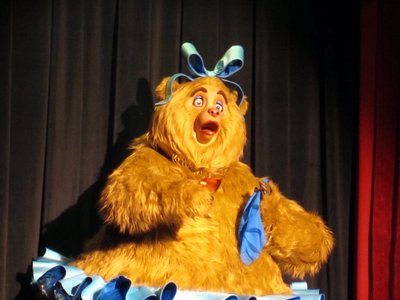 The Country Bear Jamboree Is Back – Just A Bit Shorter

Back on October 1, 1971 when The Magic Kingdom opened, the Country Bear Jamboree was there. And it was a huge draw in Frontierland. But over time, new attractions, technologies, and changing tastes made the old favorite seem, well, a little old.

In August, 2012 Disney closed the Country Bear Jamboree. They didn’t say how long it would be down, what changes would be made, or if the show would even return. Some people feared that favorite characters would be cut, or all of the humor and political incorrectness that was in the show would be eliminated.

This is a difficult balancing act for the Disney Company. Some shows and attractions get to be old and tired, and honestly the Country Bear Jamboree was on its way into that category. Even during the busiest seasons of the year, there was rarely a wait to see the Country Bears.

And Walt Disney himself acknowledged that the theme parks needed to change, saying that he wasn’t creating a museum.

But changing shows that are part of our childhoods, are long-time favorites, and are icons of Disney history is tricky business.

Disney has learned some lessons about updating shows and they were careful about the changes made to the Country Bears.

It seems that they learned that it isn’t necessarily a good idea to slap in a current character into an old attraction – done unsuccessfully in “The Enchanted Tiki Room – Under New Management” but also done successfully in “Pirates Of The Caribbean“. As a result, you won’t see any new characters added to the show, and you won’t see any of your old favorites missing. All the original characters are still there.

It seems that they also learned that you don’t need to make everything perfectly politically correct.

In the same way, Trixie still sings her heart out to the song “Tears Will Be the Chaser for Your Wine”. Those who are prohibitionists might be offended, but they are probably offended by every country radio station too. Again, we can have a little fun without everything being white washed.

The primary change is that Disney made the show shorter. Its original running time of 15 minutes and 55 seconds is now 10 minutes exactly. That cut was made in two ways. First, they removed the songs “Fractured Folk Song” and “Pretty Little Devilish Mary”. They also took out much of the back-and-forth conversation of Buff, Melvin and Max – the animatronic talking animal heads on the wall. They still introduce the show and talk during the exit.

According to a New Your Times interview with an executive at Walt Disney Imagineering (Source), there were also changes to the curtains and the props, as well as new behind-the-scenes control systems that could allow Disney to make changes to the show more easily. The Country Bear Christmas Special was a seasonal overlay that operated from 1984 – 2005, but then stopped – probably because of the time and expense of changing the show. Perhaps we will see its return?

I saw the show and still enjoyed it. To me it seemed that the finale and ending was a little abrupt, but the new overall length of the show didn’t bother me. The bears and the sets also looked good. It was nice to see a classic lovingly preserved and freshened.