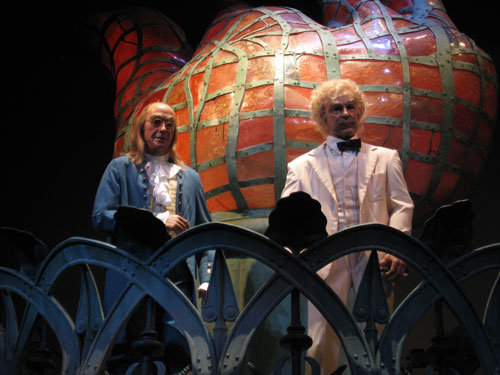 Six Sensational Shows You Might Be Missing in Walt Disney World

There you are, lined up outside Walt Disney World’s Magic Kingdom at rope drop (park open), waiting for the cast members to start letting the guests of the day start streaming into the theme park. You have your itinerary all lined up that may include such headliners as Seven Dwarfs Mine Train, meeting your favorite princesses over at Princess Fairytale Hall, or Splash Mountain. Once you get into the park, you make a beeline for the big rides and attractions and sometimes skip right past some of the best entertainment Walt Disney World has to offer: the shows.

On certain trips, I’ve been guilty of the same thing. But don’t worry! I’m here to let you in on the secret of the Six Sensational Shows You Might Be Missing in WDW!

Performed several times each day in the Magic Kingdom, the Main Street Trolley Show is one that I try to see each and every trip. There was a VHS tape out when I was a kid (and probably too old to watch it!) called “Disneyland Fun” and it had a version of this show as one of the segments. The song, “I’m Walking Right Down The Middle of Main Street U.S.A.” was featured during the segment on the film and is still performed by the Main Street Trolley Show performers. I love it so much I found the DVD for my children who have watched it countless times. Now when we all go to the Magic Kingdom and that show is performed, it’s like I’m brought back to my childhood every single time. The show features great dancing, music, and is truly a must-see for my family every trip!

This show is a little bit different than the original Jedi Training Academy show over in Disney’s Hollywood Studios, but now it’s even better! Young Star Wars fans who wish to become honorary Jedi Knights are “trained” in the ways of The Force, and then sent off to fight the bad guys like Darth Vader and Kylo Ren in front of a large audience. Maybe you, like me, have seen this show going on outside the Star Tours attraction and have run right past it, eager to board your Star Speeder. The next time you’re in Hollywood Studios though, I’d suggest taking the time to grab a cold drink and stand and watch not just the awesome performances by the Jedi trainers and the bad guys, but the reactions and the faces of the young Padawans (the kids) who are truly living out their Star Wars fantasies!

This one over at Disney’s Animal Kingdom is barely shy of an all out Broadway show. The sets are amazing, the characters from the film (operated and acted out live by amazingly talented Disney performers) really come to life, and the music is some of the best in any Walt Disney World attraction, anywhere. What’s amazing about this is, there were barely any songs in Finding Nemo. Sure, it had an incredible score like most Pixar films do, but the songs for this show are all original to this musical. As an added bonus, if you’re looking to escape the summer heat in the park, this is a nice, long, air-conditioned show! You can’t beat it!

If you haven’t seen Bob’s show, or even heard of it, I don’t even know if I can explain it to you. This is an article about shows, though, so I’m going to do my best to try! YeHaa Bob Jackson has been performing his wild, all-ages show over at the River Roost Lounge at Disney’s Port Orleans Resort for almost 20 years! He plays a unique piano that literally rocks back and forth as he plays and he gets the entire audience up and singing and dancing throughout the show. His musical style is like something you’ve never seen before and you just have to get over to “The Port” to see him on your next trip to Walt Disney World! The best part about his show? It’s completely free! When you see Bob, please tell him that Phil from Ear To There Travel says hello!

Okay, so I may be cheating just a little bit here, since this one isn’t a show that’s put on by live performers. It is, however, the closest thing to it and all of the parts in the show are played by thirty-five amazing Disney audio-animatronic characters. The American Adventure is a long one at nearly thirty minutes, but I promise it will be one of the most inspiring and emotional thirty minutes you spend during your whole Walt Disney World vacation! Audience members are taken back in time to moments like the Revolutionary War, the Civil War, American Industrialization, and the Great Depression. I guarantee you that as you’re walking out of the theater, you’ll be singing the theme song, “Golden Dream” at the top of your lungs!

1. Festival of the Lion King

One thing about The Festival of the Lion King is it’s show building has always been tucked away somewhere and almost hidden away in Disney’s Animal Kingdom. For years, it was in the Camp Minnie-Mickey section of the park, which some guests may not have always realized was there. Now, it sits in the Africa section, but if you’re running right for Kilimanjaro Safaris or Gorilla Falls, you’ll blow right past it! Let me tell you that that would be a huge mistake! The show is based on the Disney animated classic, The Lion King (obviously!) and tells the story of the film with some incredibly talented performers including singers, dancers, acrobats, a fire knife twirler, and more. There is fantastic audience participation and the performers invite guests out of the crowd to get involved with the performance throughout the show. If you’re looking for something that will have your jaw on the floor, make sure you don’t miss the Festival of the Lion King!

There’s an awful lot to see in Walt Disney World, so sometimes you have to pick and choose what you’re going to experience on a certain trip and what you’re going to leave until future trips. If you have time in your schedule for these six shows on your next vacation, I promise you will not be disappointed! All six have that little extra something that makes Disney’s shows stand out from the rest of the theme parks around the world!

Are you a fan of The American Adventure?  Do you have a favorite show at Disney World?